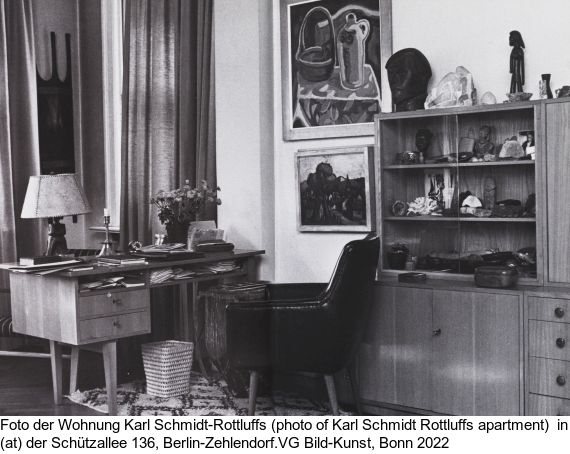 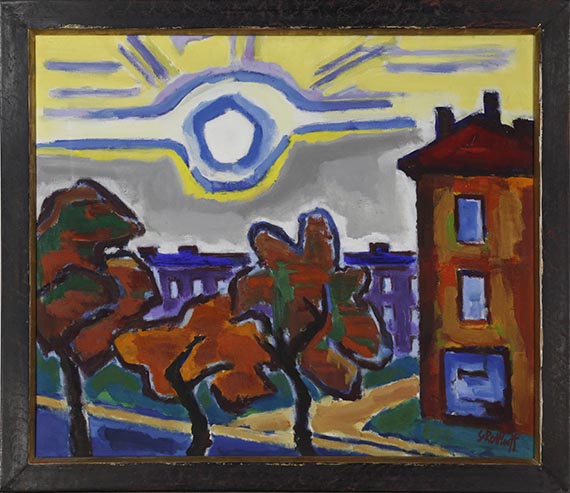 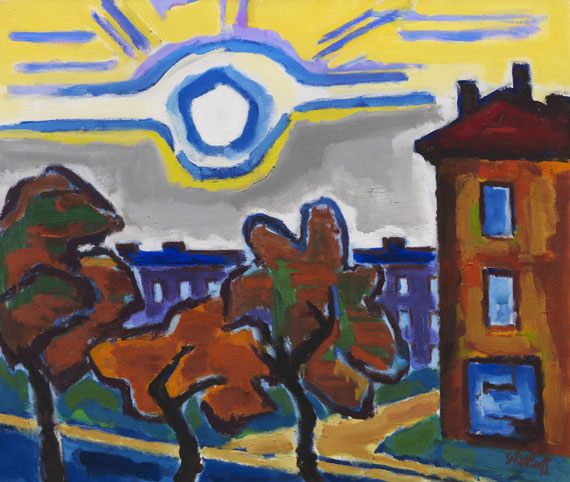 • Paintings with a Berlin motif are extremely rare in Schmidt-Rottluff's œuvre.
• Expressive townscape from the artist's late creative period.
• Characterful work in fiery colors.
• Exhibited during the artist's lifetime.
• In the past ten years only one painting from Schmidt-Rottluff's late creative period after 1960 was offered on the international auction market (source: artprice.com).

The painting is documented in the archive of the Karl and Emy Schmidt-Rottluff Foundation, Berlin.

In this painting in vivid colors, Karl Schmidt-Rottluff presents us a scenery that is extremely rare in his painterly oeuvre. While most of the other "Brücke" artists, Ernst Ludwig Kirchner in particular, often used the big city as a source of inspiration during the days of the artist group, one looks almost in vain for an examination of this motif in Schmidt-Rottluff’s work. "Sonne über Häusern“ (Sun above Houses) is one of the very rare paintings in which the artist makes his place of residence Berlin a motif. The expressive composition contains a special personal reference, because Schmidt-Rottluff allows us a view from the window of his Berlin apartment. In 1947 he was appointed to teach at the Art University and moved to Schützallee in Berlin-Zehlendorf, where he would live until the end of his life in 1976.

In 1964, when the artist implemented his idea of \u8203\u8203 founding a museum dedicated to the “Brücke” group, it was created in the immediate vicinity of Berlin-Zehlendorf, which also made Schmidt-Rottluff’s personal connection to this part of Berlin clear. With a donation to the state of Berlin, the artist also provided the basic framework for this collection. Through numerous other acquisitions by the artist and donations from companions such as Erich Heckel, Max Kaus and Emy Roeder, the collection was expanded over the years. In 1967, the Brücke Museum was opened, today it still houses one of the largest collections of artworks by the “Brücke” members.

The present colorful view from Schmidt-Rottluff's Berlin apartment was created at the peak of his artistic activity. Only a little later, in 1964, he finally stopped painting with oil paint. The artist depicts the view from his window onto Ersteiner Strasse with concise contours in the two-dimensional, characteristic painting style of his late work. Behind three beautiful autumn tress, we see a long front of houses under a powerful, over-sized sun. The agitated gray sky counterbalances the bold coloring of the rest of the scene. Especially in Schmidt-Rottluff's later works, a tendency towards an almost graphic interpretation of the subjects in the picture can be seen, which effectively conveys the content through a strong color palette. It is precisely this colorful, lively and graphic style of painting of the late work that makes the personal perspective of the painter and graphic artist Schmidt-Rottluff all the more personal and emotionally comprehensible. [AM]
More Information
+
Sell
Get a free appraisal for a similar object!
+
Register for
Karl Schmidt-Rottluff
+
Buying from A-Z
+
Contact a specialist
+
Karl Schmidt-Rottluff Biography
Share