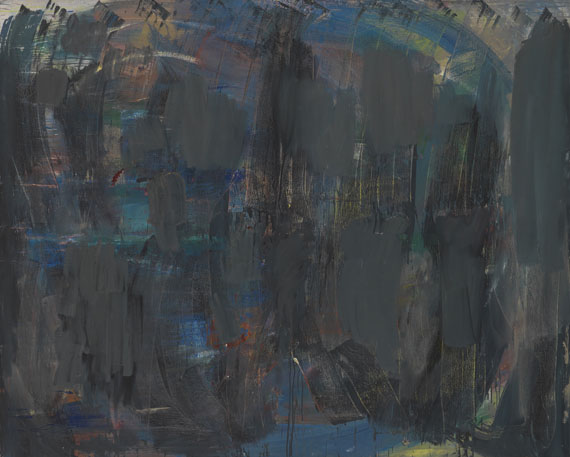 PROVENANCE: Private collection (acquired from the artist in 1991).

FARBE ABSOLUT. KATHARINA GROSSE. GOTTHARD GRAUBNER was the title of an exhibition at the Küppersmühle Museum für Moderne Kunst in Duisburg in 2019. The internationally acclaimed painter Katharina Grosse (born in Freiburg/Breisgau in 1961) encountered the legendary "color space bodies" of Gotthard Graubner (1930–2013), who was her teacher at the Düsseldorf Academy in the second half of the 1980s. The starting point for both artists is the conviction of a timeless, existential power of color, which is immediately transferred to the viewer and becomes physically tangible, as is surprisingly convincing and powerful to understand with this canvas from 1989. While still at the academy, the artist clearly differentiated between the colors, 'primed' the firm canvas a second time with luminous fields of blue, yellow and red, painted over them, like a glaze, with vigorous brushstrokes placed side by side in black, and allows the picture’s ground to shine through. The black, applied in generous up- and-down or horizontal movements and in different layers, is like a film, like a veil that lies on the ground and yet reveals a mixture of differently colored zones. The brushstrokes, here plastically heightened, become elements of her painting, a specific superimposition allow for a horizontal and vertical orientation, as is the case with the canvas in the present work, or with her later sprayed walls. The phenomenon of painting over seems to have fascinated Katharina Grosse from the very beginning, and not just since her painting had reached architectural dimensions. She transfers the movement of her body onto her painting, a form of panel painting that takes on a representational form, the viewer encounters an own reality of the color. "I studied performance with Ulrike Rosenbach for half a year. When I returned to painting, I was more aware of what the body is doing in front of the canvas before it leaves traces on it," says Katharina Grosse, explaining what makes her painting so dynamic and exciting (quoted from: ex. cat. Farbe absolut. Katharina Grosse. Gotthard Graubner, Küppersmühle Duisburg, 2019, p. 81). For the artist, the production of a picture was already a physically intensive and comprehensible process at that early point.

As is the case with Gotthard Graubner, her decision to place her painting at the forefront of the history of modernity is based on the appreciation with which the artist treats painting, how she deals with the medium, how she creates an illusionistic, non-hierarchical space.
Everything seems to be subject and subordinate to a painting order, superimposed with new, strange tones, through which the artist characterizes her panel paintings. "I thought back then that his [Graubner's] quest for the balance of colors was very subtle and clever. He talked about how important his emotions and feelings were in this regard. What impressed me the most was how self-centered he was. What he said about painting actually was what he had found out through experience. There was no second hand knowledge, no theory he followed”, is how the artist described her teacher in an interview with curator Corinne Diserens (ibid., p. 77).

Katharina Grosse's specific application of paint becomes a method. The brush’s direction impulses clearly stand out, the strokes overlap horizontally and vertically. But the energetic brushstrokes adhere to the format of the canvas, restrained on the limited painting surface - and yet open up pictorial spaces with their expansive power. "Graubner paid very close attention to what unfolded during the act of painting and he made sure to make direct use of these observations. It was inspiring to see how this helped him to achieve his particular pictorial form " (ibid., p. 79). While spray painting dissolves the boundaries between both painterly elements and support structures, the brushstrokes in earlier works followed the horizontal and vertical boundaries of the image carrier, which also correspond to the elementary directions of space. In a logical breach of this rule, she also added diagonal and rounded color bands at a later point, which she eventually dissolved and organized in directions other than the main geometric directions. Katharina Grosse worked in large formats from the very start, always keeping an eye on the architectural situation. Thus, the decision to use the spray gun at the end of the 1990s seems only logical: a special conception of painting, image and location, which the present work from 1989 heralds. [MvL]
More Information
+
Sell
Get a free appraisal for a similar object!
+
Register for
Katharina Grosse
+
Buying from A-Z
+
Contact a specialist
+
Katharina Grosse Biography
Share