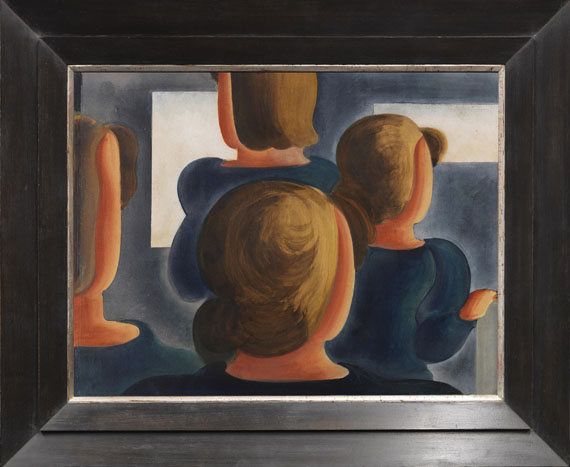 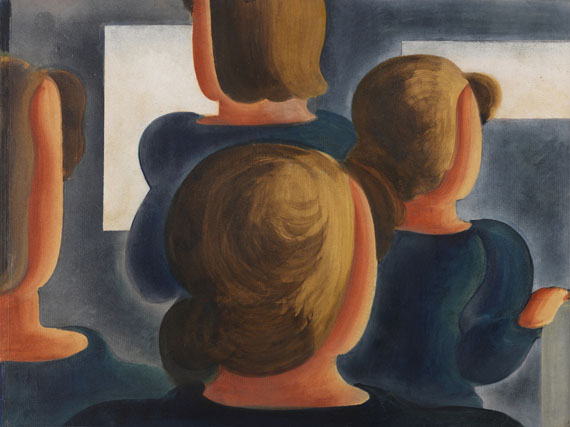 37
Oskar Schlemmer
Vierergruppe mit Grau, 1930.
Watercolor and gouache on primed fiberboard
Estimate:
€ 200,000 / $ 188,000
Sold:
€ 425,000 / $ 399,500
(incl. surcharge)
Vierergruppe mit Grau. 1930.
Watercolor and gouache on primed fiberboard.
Von Maur A 400. Signed, dated and titled on a label on the reverse. 42.4 x 54.7 cm (16.6 x 21.5 in).
"The present sheet was belatedly varnished and laid on fiberboard [by Oskar Schlemmer or] Schlemmer's brother Carl. Hence the increased pictorial character, which explains why the watercolor has since been regarded as a painting." – Karin v. Maur, in: Oskar Schlemmer. Oeuvrekatalog der Gemälde, Aquarelle, Pastelle und Plastiken, Munich 1979, p. 303.
• Particularly clear, hig-contrast visualization of Schlemmer's quest for the ideal symbiosis of figure and space.
• Works from Schlemmer's Breslau days between 1929–1932 are considered highlights of his creation.
• Watercolors with similar figure compositions of this quality are extremely rare on the international auction market.
• The year this work was made, Schlemmer showed his works at XVII Venice Biennale, and a year later in the grand exhibition "Modern German Painting and Sculpture" at the Museum of Modern Art in New York.
• Part of the renowned Fänn and Willy Schniewind Collection for almost 40 years.

Man at the Center of Artistic Creation
During his time at the Bauhaus in Weimar (1921–1925) and in Dessau (1925–1929), Oskar Schlemmer worked not only as a painter and graphic artist, but also as a sculptor, stage designer and choreographer. At first Schlemmer taught the mural painting class, followed by the metal workshop, as well as the class of wood and stone sculpting.
On his quest for a stronger coalescence of art and architecture in the 1920s, Schlemmer's artistic projects became increasingly three-dimensional after he was appointed to teach at the Bauhaus in Weimar. In addition to costume designs, choreographies and stage designs, he also created sculptures and wall reliefs, among them works for the Museum Folkwang in Essen, which were destroyed by the National Socialists in 1934. His experimental spirit of the 1920s culminated in the costume and stage designs for the "Triadisches Ballett” (Triadic Ballet, premiered in 1922), today considered a milestone in German dance theatre. In 1929 the artist followed a call to teach at the State Academy of Arts and Crafts in Breslau. During these years he produced some of the most important works in his œuvre, including the famous painting "Bauhaus Stairway" (1932, Museum of Modern Art, New York) (fig.). Schlemmer's extremely rich work revolves almost exclusively around the depiction of the human head and body. The location of the human figure in space remains at the core of his unmistakable works. In them, the artist embarked on a quest for his very own artistic ideal type of human physiognomy, a "universally valid type of figure", as Karin v. Maur, author of the catalogue raisonné, put it.

The Figure in Space: Geometry and Typification, Light and Shadow
In his search for a generally valid type of figure, Schlemmer refrained from depicting individual appearances and physiognomic peculiarities. Instead, he made use of a highly simplified, almost abstract-geometric repertoire of forms from which he assembled his figures. Figures in the present work consist – in stark contrast to the strictly rectangular architecture around them – exclusively of rounded forms; faces and limbs are reduced to simple, in part only suggested, soft features and shadowy silhouettes. Only their pinned up hairstyles identify them as female figures. "I want to create types of people and not portraits, and I want the essence of space and not interiors", the artist explained in reference to his aloof figures (quoted from: ex. cat. Oskar Schlemmer, Stuttgart 1977, p. 9). Hence "Vierergruppe mit Grau" cannot really be seen as a figure painting, as Schlemmer was more concerned with the figure’s location in the pictorial space. The artist shows the backs of the female figures’ heads in extreme close-up, letting figure and space merge to a certain extent. Almost playfully, Schlemmer lets a little light fall through the windows that bathes the figures in light. The chiaroscuro and the juxtaposition of warm and cold colors make for additional focus on the composition’s architectural elements, creating yet another tense relation between figures and space. The impression of spatiality and depth is also emphasized by the figures’ different viewing directions and their motion: each of them seems to be looking and moving away from the observer in a different direction. Schlemmer did not only line up the figures at different distances from one another, but also placed them at completely different horizontal levels, thus putting the observer at a slightly lowered position.

Schlemmer's Figures on Stairs
Accordingly, Oskar Schlemmer also seems to have positioned the figures in the present "Vierergruppe mit Grau" – like the figures in his most famous painting, "Bauhaustreppe" (Museum of Modern Art, New York), which was painted somewhat later – on a stairway. Unlike it is the case with the famous painting in New York, the stairs are not depicted but only suggested by the figures’ arrangement in the present work. Another difference is that the figures are shown in back view and not in profile or frontal view.
In this work Schlemmer skillfully uses the staircase as an invisible compositional tool to create deep spatial effects and an overall fascinating composition. Only the female figure in right, with her bent arm and her hand resting as if on a light gray handrail, seems to subtly point to the invisible architectural element beneath her feet.
The artist used the motif of the ascending staircase with a railing in works that were made before the famous "Bauhaustreppe" and the "Treppenszene" (1932, Hamburger Kunsthalle), for example in the painting "Szene am Geländer" (1931, Staatsgalerie Stuttgart) (fig.) or in the particularly early work from the Dessau Bauhaus period "Frauentreppe" (1925, Kunstmuseum Basel). A photograph that was co-arranged by Schlemmer also testifies to the early fascination with the motif: it was taken around 1927 in connection with a farewell gift to Walter Gropius on the occasion of him leaving his post as director of the Dessau Bauhaus ("Die Weberinnen auf der Bauhaus-Treppe", Bauhaus Archive, Berlin, photographer: T. Lux Feininger in cooperation with Oskar Schlemmer (fig.)). The photographer and Bauhaus student T. Lux Feininger wrote about the event at that time: "On the day the picture was taken, all those involved met, including Oskar Schlemmer who arranged the group's pose. He told us that he had been working on a 'staircase picture' for quite some time." (Letter to the Bauhaus Archive, July 14, 2009, quoted from: www.kunst-archive.net/).
Not only the railing and the staircase motif can be found in other works. Schlemmer also frequently used truncated heads and completely de-individualized, stylized back figures formed from geometric components that move away from the viewer, as well as window formations. Accordingly, with the present work from the significant Breslau period, Schlemmer composed a symbiotic whole of figure and space of a timeless, highly characteristic and yet universally valid formal language and modernity, a work that seems to continue beyond its pictorial boundaries and reach into the observers’ space.
Further works from this private collection are offered in our Modern Art Day Sale (Saturday, December 10, 2022, lots 455, 489, 527).
More Information
+
Sell
Get a free appraisal for a similar object!
+
Register for
Oskar Schlemmer
+
Buying from A-Z
+
Contact a specialist
+
Oskar Schlemmer Biography
Share