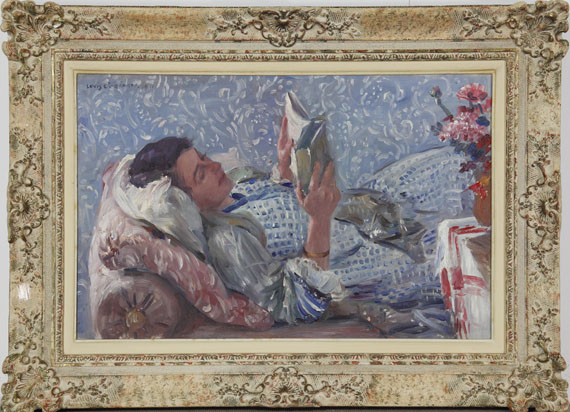 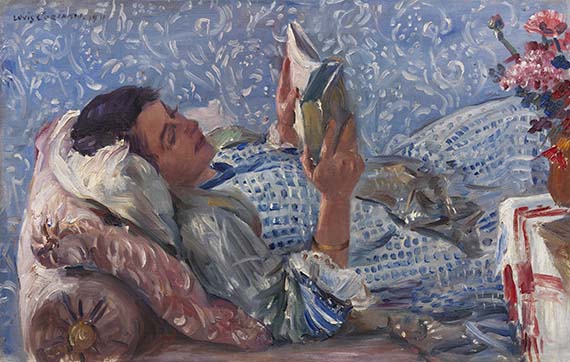 • Corinth's declaration of love to his wife Charlotte.
• Intimate motif, made during their last untroubled holidays in St. Ulrich/Val Gardena, before Corinth suffered his first stroke in December 1911.
• The painting has always been in important collections and was exhibited at the Nationalgalerie in Berlin during his lifetime.
• Privately-owned for more than sixty years.

PROVENANCE: Sold subject to an amicable agreement with the heirs after Emil and Sophie Kaim (2022). No pending restitution claims.

"When this picture was made, I didn't notice that Lovis was painting me. I was so absorbed in my book that I heard him set up the easel and sit down to paint, but I thought that he was going to paint the flowers on the table next to the sofa. Then I immersed myself in my book again.. The picture emanates a subtle intimacy. And it is kept in a light cheerful harmony."
Charlotte Berend-Corinth, in: Heise 1958, p. 28.

The intimacy of this painting, as described by the sitter herself, is also deeply felt by present day viewers. Such direct encounters between picture and viewer are inherent in Corinth's works in many aspects. Whether the most delicate human closeness, brute force or wild erotic desire, the artist's gestural brushwork captures the feelings of life on the canvas and captivates the viewer. In the numerous portraits of his wife Charlotte – his muse on the sofa at home – Corinth expresses both loving desire as well as the intimacy of a quiet Sunday afternoon. Delicate shades of blue, the ornamented wallpaper and the bouquet of flowers in the right of the picture emphasize domesticity and tranquility just as much as the head of his beloved Charlotte resting on the pillow does. Completely immersed in the moment of reading, Corinth takes the viewer on secret paths to the numerous depictions of reading women that art history has to offer, absorbed between the flowers of a Monet (fig.) or on the fluffy sofa cushions of a Fragonard. The fact that Corinth was oriented towards French modernism, particularly towards the pioneering post-impressionist "pattern painting" of Édouard Vuillard or Pierre Bonnard, also gives this picture a very special art-historical significance.

So it is no surprise that this impressive painting was part of the collection of Sophie and Emil Kaim from 1923 the latest. The exquisite collection also comprised works by Wilhelm Trübner or Anselm Feuerbach.
Dramatic years followed. During the Nazi dictatorship, the collectors Emil and Sophie Kaim were persecuted because of their Jewish origin. After the Kaims' wood trading company was aryanized in 1938, the couple was forced to leave the villa with the extensive library and the art collection that had been amassed with passion over decades. Instead they had to move into a so-called ‘Judenhaus‘. With a lot of luck, Emil and Sophie Kaim survived the Theresienstadt concentration camp, to which they were deported in 1943. The Kaims reached the safe haven Switzerland in 1945 on a special transport.

The library and the works of art in the Villa Kaim were confiscated by the National Socialists as early as 1940, and some of them ended up in the Breslau Museum of Fine Arts. "Die Lesende" was acquired by the museum in February 1942 and was finally auctioned by the German trustee for confiscated property in 1944. It remains unclear who acquired the painting. However, it reappeared on the German art market in the late 1950s, where the ancestors of the current owners bought it without any knowledge of its history.

Today the painting can be offered on the basis of an amicable agreement between the owning family and the heirs of Emil and Sophie Kaim: a happy ending and at the same time a new beginning for a delicate and soulful masterpiece. [SVDL]
More Information
+
Sell
Get a free appraisal for a similar object!
+
Register for
Lovis Corinth
+
Buying from A-Z
+
Contact a specialist
+
Lovis Corinth Biography
Share