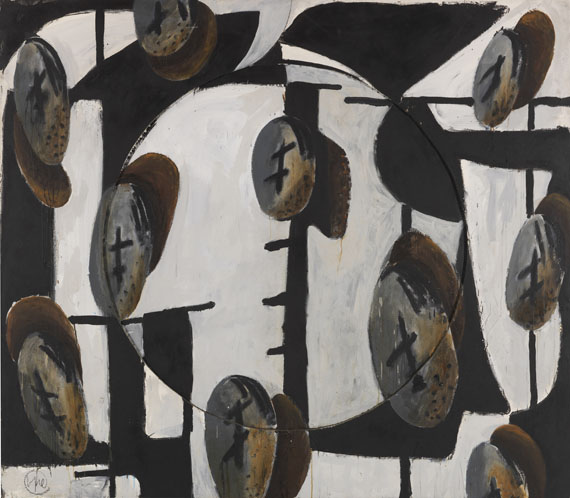 This work's authenticity was kindly confirmed orally by the Atelier Markus Lüpertz. We are grateful for the kind support in cataloging this lot.

"I wanted to create representational equivalents in the abstraction of my consciousness, so to speak an abstract representational concept."
Markus Lüpertz in an interview with Peter Schwerfel, 1989 Cologne.

From the second half of the 1970s until around 1984, Markus Lüpertz’s work was dominated by what he called “style painting“. Certain basic forms were repeated and combined in the picture. One principle of Lüpertz's painting becomes evident: The play between object and form, between object and abstraction. In an interview with Heinz Peter Schwerfel, Markus Lüpertz said: "I was so obsessed with abstraction that I didn't perceive the abstract as an opposite of the concrete, but just as natural as a table. I wanted to create physical correspondences in the abstraction of my consciousness, i. e. an abstract representational concept." (Cologne 1989, pp. 29f.). In the present work we see sculptural forms with traits that are reminiscent of still lifes owing to their monumentalization. Various associations are evoked, however, they remain in limbo for we cannot fathom the forms. It is the combination of the heterogeneous that creates disquietness here. The art of Markus Lüpertz, who is regarded a "painter prince", is characterized by an impulsive will to form with a tendency to obscure the content through an increased encryption. A motif that is recognizable to a certain degree and just a hint of possible configurations seem to recede into the background here. There is no significant clue to a story. The geometrical-abstract pieces alone add a certain solidity to the events in the black-white-brown composition. In his expressive works, Lüpertz is always concerned with a thoroughly painterly pictorial space that can exist independently of the representation of figurative motifs. He possesses an unerring sense of compositional balance and differentiation of form and color, as this painting clearly reveals. [MvL/AR]
More Information
+
Sell
Get a free appraisal for a similar object!
+
Register for
Markus Lüpertz
+
Buying from A-Z
+
Contact a specialist
+
Markus Lüpertz Biography
Share