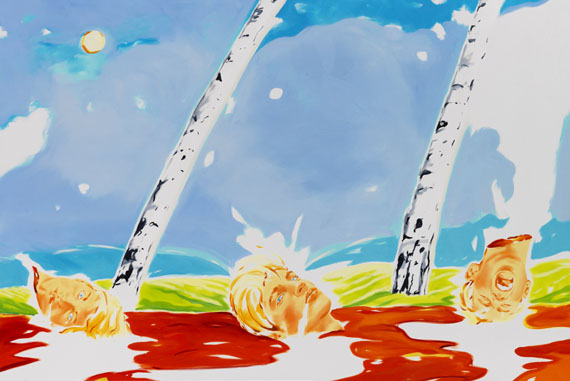 • This is an internationally sought-after large-size painting from the 2000s.
• Bisky takes motifs from art history and implements them into his very own contemporary pictorial language.
• Works by the artist can be found at, among others, the Museum of Modern Art, New York, the Berlinische Galerie Museum für moderne Kunst, Berlin, and the Museum Ludwig, Cologne.

PROVENANCE: Galerie Michael Schultz, Berlin.
Private collection Berlin (acquired from the above in 2005).

With his powerful, expressive works, the artist is now considered one of the most important painters of postmodern figuration (Handelsblatt Magazin 04/2019). As early as in 2014, the Kunsthalle Rostock honored him with a comprehensive exhibition covering his first fifteen years of work. Currently the artist's works can be seen in the large-scale solo exhibition "Norbert Bisky. Disinfotainment" at the G2 Kunsthalle in Leipzig until 2021/2022. His figurative works are part of renowned collections, including the Museum of Modern Art in New York, the Berlinische Galerie Museum for Modern Art, Berlin, the Israel Museum, Jerusalem, the Burger Collection, Hong Kong, and the Hall Art Foundation, Reading (Vermont) / Derneburg Palace Art Museum.
At the beginning of the 1990s, Bisky began to study German and art history before he changed to study painting at the University of the Arts in Berlin from 1994 to 1999 under Georg Baselitz. However, European art history also plays an important role in his own work. Bisky remembers standing in front of the works of the great Renaissance artists for the first time after the reunification, "like a starving schoolboy in a pastry shop" (Norbert Bisky, quoted from: Gabi Czöppan, Wenn ein junger auf alte Meister trifft, Focus Online, No. 10, 03/01/2019). At that time he traveled to Florence, Venice, Padua and Verona to see the paintings with his own eyes. As an art student, he copied the baroque masters in the Prado in Madrid and painted "the GDR from the soul".
After the turn of the millennium, Bisky's works are a bit bolder, crass, sexualized and often more brutal than the more subtle works of his earlier years, in which the only supposedly ideal world of pastel, athletic and shapely figure pictures shown becomes subliminal and slowly crumbles at second glance. Bisky is now showing a cosmos of images with apocalyptic scenarios, explosions, tornadoes, severed body parts, blood and other bodily fluids, which Bisky - like here - often depicts in blooming white. The works look like contemporary depictions of martyrs and the painting offered here with the decapitated, lifeless as well as fearfully and painfully distorted heads can also refer to the traditional, bloodthirsty and shocking depictions of the beheading of John the Baptist by Salome or of Holofernes beheaded by Judith.
Whether Renaissance master, Baroque painter or Norbert Bisky - the artist himself explains: "Some pictures work like a comic - every child understands them." (ibid.). [CH]
More Information
+
Sell
Get a free appraisal for a similar object!
+
Register for
Norbert Bisky
+
Buying from A-Z
+
Contact a specialist
+
Norbert Bisky Biography
Share