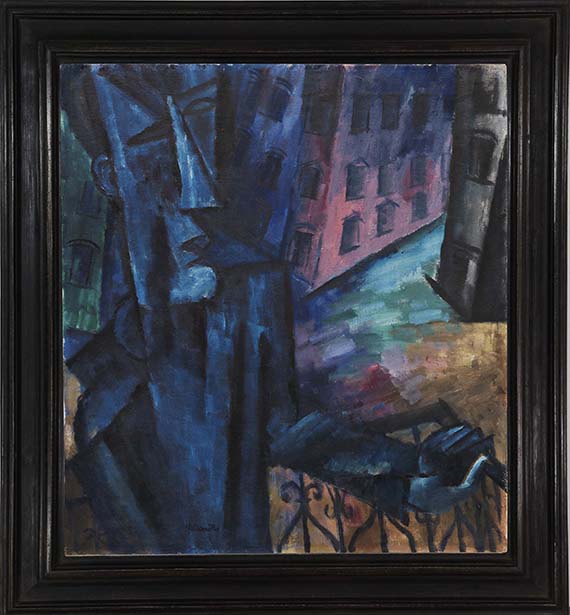 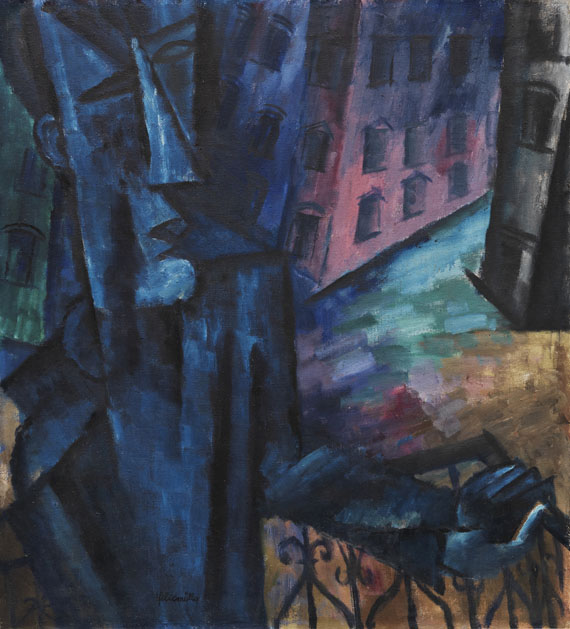 • Significant work from his expressive creative period.
• The rare early figure compositions are among the artist's most sought-after works on the international auction market.
• Shown at the acclaimed Kunstsalon Ludwig Schames the year it was made.
• Part of the same private collection for more than hundred years.
• From the renowned collection of the physician and art collector Dr. Hans Koch (1881-1952).

Felixmüller's flourishing years in Dresden
The career of Konrad Felix Müller, who was born in Dresden in 1897, got off to a breathtaking start. After studying at the Dresden Academy, he settled in Dresden as a freelance artist in the fall of 1915, received a contract with the renowned art dealer Emil Richter on Prager Strasse, in the summer he met the avant-garde gallerist Herwarth Walden and the well-known artists of the "Sturm" circle through Ludwig Meidner, became a staff member of the magazine "Der Sturm", met Franz Pfemfert, the editor of the magazine "Die Aktion", for whom he made illustrations until 1924. In his Dresden studio he regularly organized "Expressionist Soirées", reading and discussion evenings, where he also met his future wife Londa Freiin von Berg (1896-1979), who he married in June 1918. Together they moved to Wiesbaden where they were supported by the collector Heinrich Kirchhoff, Felixmüller worked for various Expressionist newspapers, made contact with the Düsseldorf doctor, art dealer and collector Dr. Hans Koch and the gallery owner Johanna (mother) Ey. In the autumn of 1918, Conrad Felixmüller (he had used this name since 1924) moved back to Klotzsche, a suburb of Dresden.
Felixmüller's rare early figure compositions
During the war, the artist changed his expression, especially in graphic art, to an energetic handwriting, which also influenced his painting. He reduced heads and figures, landscape fragments appear in ciphers, to angular, at times seemingly geometric elements, without committing himself to academic cubism. He rather looked for expansive forms of expression with which he, as he himself wrote, created "true space", "dynamics of pure forms: cubes, prisms. Crystal eternity". (Conrad Felixmüller, von ihm - über ihn. Edited by Gerhard Söhn, Düsseldorf 1977, p. 12) With the evening balcony scene, Felixmüller paints one of those restless, expansive, simultaneous situations. A figure cast in deep blue stands as if carved in stone on the balcony overlooking the street. It is night, the windows are not lit, pale light falls on the colored facades. The balcony scene looks dreamy, like an inner experience of the nocturnal city with kaleidoscopic refractions of the colors and ever-changing views. Up to the leveling of all object forms, Felixmüller tells the contradiction between man and the outside world, which appears here as the only object in the entire picture. "I always felt basic figures in the appearance, which made the nose appear triangular, eyes semicircular, faces sharply oval and modeling in clearly defined areas," says Felixmüller himself, in retrospect, as he explains his perception of the design of the new human being and thus symbolizes it the hoped-for social and "spiritual new beginning". (Quoted after Friedrich W. Heckmanns, in: Conrad Felixmüller, Schleswig 1990, p. 58) In this early, expressive painting, Felixmüller combines an emotional physiognomy of a figure that has turned into a sculpture and overlaps it with the colorful but also cold big city.
From the most important collection of the physician and collector Dr. Hans Koch (1881-1952)
Shortly after it was created, the renowned gallery owner Ludwig Schames showed the work in October 1918 in Frankfurt. The doctor and collector Dr. Hans Koch discovered the "Evening Balcony" scene at the Große Kunstausstellung in Düsseldorf in 1920 the latest and purchased the work. It can be assumed that Felixmüller made our picture part of the first exhibition at Hans Koch's "Graphisches Kabinett" in Düsseldorf as early as in November 1918 and that the gallery owner acquired the balcony scene there. Shortly before that, the urologist and his wife Martha – who would marry marry Otto Dix in 1923 – opened the "Graphisches Kabinett von Bergh und Co." at Blumenstraße 11 in Düsseldorf, and also showed works by, among others, Otto Dix, Lyonel Feininger, Emil Nolde, Erich Heckel. In June 1920, the art dealer and publisher Israel Ber Neumann took over the gallery. [MvL]
More Information
+
Sell
Get a free appraisal for a similar object!
+
Register for
Conrad Felixmüller
+
Buying from A-Z
+
Contact a specialist
+
Conrad Felixmüller Biography
Share