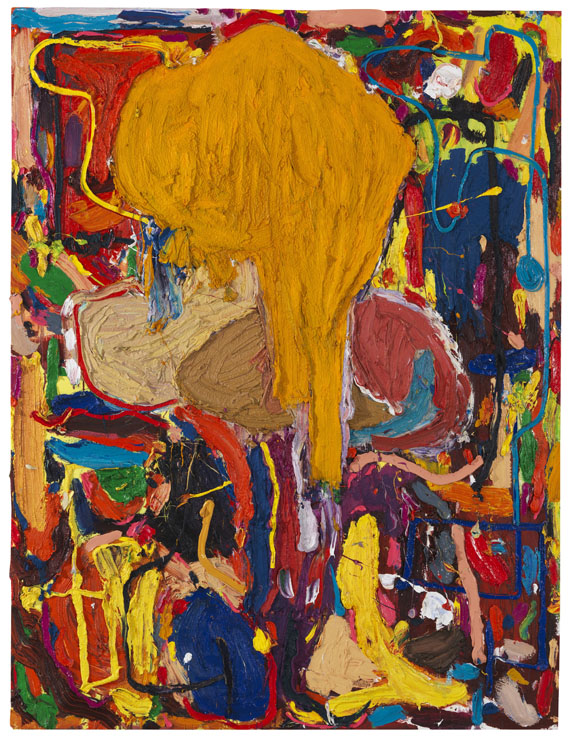 • Very typical impasto work.
• A work so tremenduously colorful that it calls reminiscence of A. Jorn.
• Works by Andrè Butzer are in, among others, the 'Hamburger Bahnhof Museum für Gegenwart', Berlin, the MOCA, Los Angeles and the Art Institute of Chicago .

PROVENANCE: Galerie Max Hetzler.
Private collection Southern Germany (acquired from the above in 2014).

"Oehlen was important to me. And he was the first who bought one of my paintings. I'll never forget that."
André Butzer, in an interview with Michael Stoeber, Kunstforum 2012, pp. 234ff

André Butzer describes his work as "abstract art" and titled his exhibition at the Kestnergesellschaft in Hanover in 2011 "Probably the best abstract painter in the world", although many of his works deal with basically figurative image content. At a young age, he was particularly enthusiastic about the works of Asger Jorn (1914-1973), through which he finally found his way to painting. Together with Jonathan Meese and other artists, Butzer founded the "Akademie Isotrop" in Hamburg in 1996, an artist group that also functions as an art teaching institute. In the years that followed, Butzer found his very own approach to art: he often created large-format works in which the artist dealt with the dissolution of the figure in pictorial space, with deformation and typification, and in doing so explored the astonishingly narrow boundary between figuration and abstraction.
Today, André Butzer's works are part of numerous renowned collections, including the collection of contemporary art of the Federal Republic of Germany in Bonn, the print room of the State Museums in Berlin, the Goetz Collection in Munich, but also international collections such as the London Saatchi Gallery, the MoCA , Museum of Contemporary Art in Los Angeles, the Art Institute of Chicago or the Rubell Family Collection in Miami. [EH]
More Information
+
Sell
Get a free appraisal for a similar object!
+
Register for
André Butzer
+
Buying from A-Z
+
Contact a specialist
+
André Butzer Biography
Share