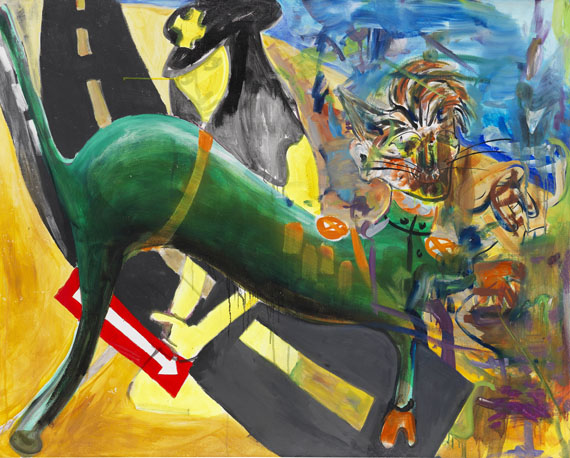 Schorsch Kamerun, Albert Oehlen and André Butzer were represented at the Steirischer Herbst several times. Their origins can be traced back to the epoch-making year 1968. This annual festival for contemporary art has been dedicated to connecting art disciplines with each other from the very beginning and was therefore groundbreaking. In 1999, the theme was "Re-Make/Re-Model: Secret Histories of Art, Pop, Life, and the Avant-garde". The theme of the time is still explained today on the festival's website: "The main question is which investments are involved when a cultural technique coded as "avant-garde" is used - and which aesthetic, institutional-critical or representational-political surpluses can be achieved in this way today." [https://archiv.steirischerherbst.at/de/series/22641/re-make-re-model].
The joint work by Albert Oehlen, André Butzer and Schorsch Kamerun can be seen at the Steirischer Herbst 1999 in the Bleich-Rossi gallery. A strong, green, sphinx-like creature jumps through the picture, her New Wave head with a wild mane. Epaulettes indicate the cool uniform jacket. Behind it, a road leads into the distance, a diva from the realm of the YMCA-singing police officers kneels down. It poses the question of being different. Christine Fisinghelli, the festival director at the time, names the difficult question of how to deal with the other and the appropriation and exclusion of minorities, the emergence of hybrid identities and the strengthening of the body" as one of the thematic reference points. [https://archiv.steirischerherbst. at/de/editions/1999. read 6.5.22]
Oehlen, Butzer and Kamerun all grew up in the time of punk and new wave, "The New Wild Ones" were the simultaneous renewal of figurative art in Germany. In this work the three artists reflect on a past they experienced themselves. While Butzer and Oehlen are primarily visual artists, Schorsch Kamerun became known as the singer of the punk band Die Goldenen Zitronen and is now also known as a director on major stages such as the Zurich Schauspielhaus and the Munich Kammerspiele.
Today, Albert Oehlen is not only regarded as the “main representative” of “post-non-representational painting”, but also as one of those European artists who painted pictures that today are regarded the blueprint for all that is apostrophized as "worth seeing". [EH]
More Information
+
Sell
Get a free appraisal for a similar object!
+
Register for
Albert Oehlen
+
Buying from A-Z
+
Contact a specialist
+
Albert Oehlen Biography
Share