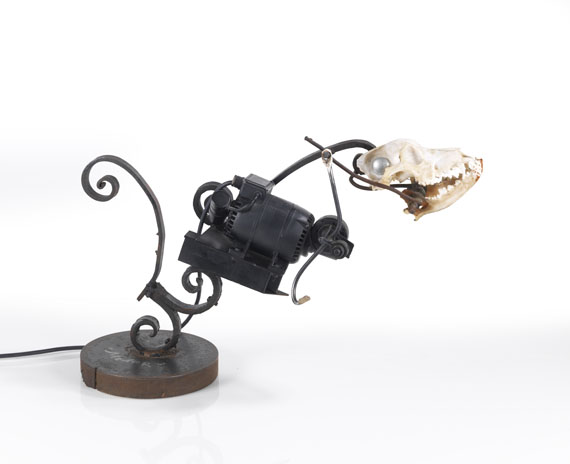 • Next to Yves Klein and Daniel Spoerri, Tinguely is a key member of the "Nouveau Réalistes".
• Acquired from the famous Galerie Schmela, Fifi" has been family-owned for almost 40 years.
• The same year the famous Strawinski Fountain at Centre Georges Pompidou in Paris was made.

With a photo expertise by the artist from July 1985.

PROVENANCE: Galerie Schmela, Düsseldorf.
Private collection Southern Germany (acquired from the above in 1985, ever since family-owned).

"Fifi" may seem strange at first glance, but this sculpture is a multi-layered work and is characteristic of Jean Tinguely's oeuvre. He is not only to be regarded as one of the most important Swiss artists to this day, but also an important representative of kinetic sculpture of the 20th century. He was occupied with sculptures between invention and construction, play and fantasy throughout his life, in "Fifi" these properties are masterfully combined.
The constructive and at the same time decorative aspect of his work accompanied him from early on when he made an apprenticeship as a decorator at the Swiss department store chain Globus. Despite his early dismissal without notice, his wire decorations continued to cause a stir and already indicated his typical artistic signature. From 1952 in Paris his art developed rapidly and in 1955 he had his first solo exhibition. Many more were to follow, including the 1959 exhibition at Galerie Schmela in Düsseldorf, where our work was acquired in 1985. Ever since it has been family-owned.

Object art is a particularly exciting field of art. It evolved from assemblage in the 1950s, but its origins can be found in the collages of Cubism and Dadaism or in the famous Readymades by Marcel Duchamp. The processing and alienation of found objects represents a central aspect of this art. Tinguely expands this field with movable sculptures that open up a multitude of levels of understanding. If they are playful, amusing and funny, they can also be touching, ironic, melancholic or critical. Our work "Fifi" is an extremely multifaceted example. From 1981 onwards, the Swiss artist used, in a thoroughly morbid manner, not only animal materials such as dog skulls, but also motorbike scrap from accidents, in connection with which people were injured. A clear reference to transience and death, but when the sculpture "Fifi" is awakened to its functioning life, its head spinning, with the help of electricity, then a smile can hardly be suppressed. It is not only the case with his famous drawing machines, the "Meta-Matics" created from 1959, that Tinguely questions the classic relationship between the creative artist, the created work and the viewer. With "Fifi", too, the boundaries between the application are blurred and the work, almost 40 years after its creation, questions both the conservative approach to art and our consumer world in a remarkably ironic way. [AW]
More Information
+
Sell
Get a free appraisal for a similar object!
+
Register for
Jean Tinguely
+
Buying from A-Z
+
Contact a specialist
+
Jean Tinguely Biography
Share