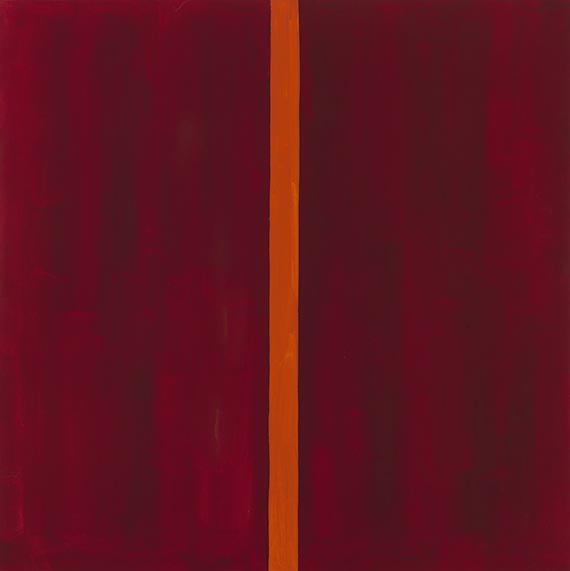 • Large-size homage to Barnett Newman in strong colors.
• Förg's paintings unite apparent contrasts: the pictorial composition's geometric strictness and the gestural spontaneity of the vibrant color application.
• Large-size color fields by Günther Förg are in possession of many renowned international collections, among them the Museum of Modern Art, New York, the Städel, Frankfurt a. M., the Stedelijk Museum, Amsterdam, and the San Francisco Museum of Art.

We are grateful to Mr Michael Neff of the Estate Günther Förg for his kind confirmation of this work's authenticity. The work is registered in the archive with the number WVF.01.B.0618.

"I love vermilion [..] That's because of the typography of the Russian Constructivists. There's somethig emblematic or lively about it."
Günther Förg, 1997.

The career of Günther Förg is closely linked to the city of Munich. Born in Füssen in 1952, he studied with Karl Fred Dahmen at the Academy of Fine Arts in Munich in the 1970s and reacted in his series of works to exhibitions such as those by Cy Twombly in the Lenbachhaus or by Blinky Palermo at the Heiner Friedrich Gallery. After his first solo exhibitions with Rüdiger Schöttle, his works were regularly on display in Munich and he left his mark as a professor for painting at the Academy until his death. Günther Förg's work impresses with its diversity. He moves with playful ease between the artistic media: painting, sculpture, mural painting, photography, drawing and graphics. Especially in painting he shows his diversity. Förg not only limited himself to the canvas, but also experimented with fabrics and paper, lead and wood as carrier materials. In addition to oil and acrylic, he also used plaster, gold leaf and chalk. He is not only interested in the diverse visual and haptic effects that can be achieved through brushwork and application of paint, but also in the resilience of the materials and their random properties, to which he had to react artistically. There is no narrative element in his works, they aim solely for visual conciseness. In doing so, he relies on a transparent application of paint so that the background can always contribute. Förg does not work in layers but achieves the desired surface effect in one application of paint, striving for a monochrome color tone. He doesn't look for depth in his paintings and that is exactly what gives his pictures their unique lightness. He gives his surfaces transparency and permeability with the obvious traces of brushwork. The movements of the brush are reminiscent of the approach and the formal repertoire of the Abstract Expressionists and the Informalists, but are not so intensely expressive that they could be understood as depictions of emotional excitement. Instead, the association with objects, such as rows of windows, is retained. The proximity to architecture characterizes his entire work. Since 1982 he has been taking large-format photographs of important cultural and historical buildings, which are characterized by their strict structure, simple lines, two-dimensional compositions and constructive symmetry. They stand for Förg's preference for strict aesthetics and calm, motionless compositions. The architecture is raised to an almost abstract level. This principle is also carried over into his painting. The window is a recurring theme in his photographic work. The window cross is schematized, becomes a form, so that it serves to divide the areas in the pictorial composition. The attention is focused solely on the essence of line and color surface and takes up the entire room with its energetic red glowing color. [SM]
More Information
+
Sell
Get a free appraisal for a similar object!
+
Register for
Günther Förg
+
Bidding Options
+
Written bid
+
Buying from A-Z
+
Contact a specialist
+
Günther Förg Biography
Share 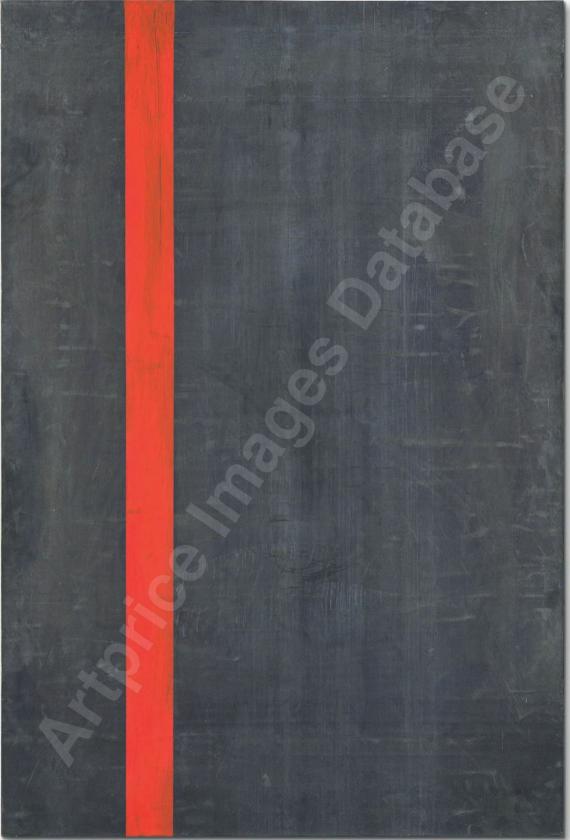