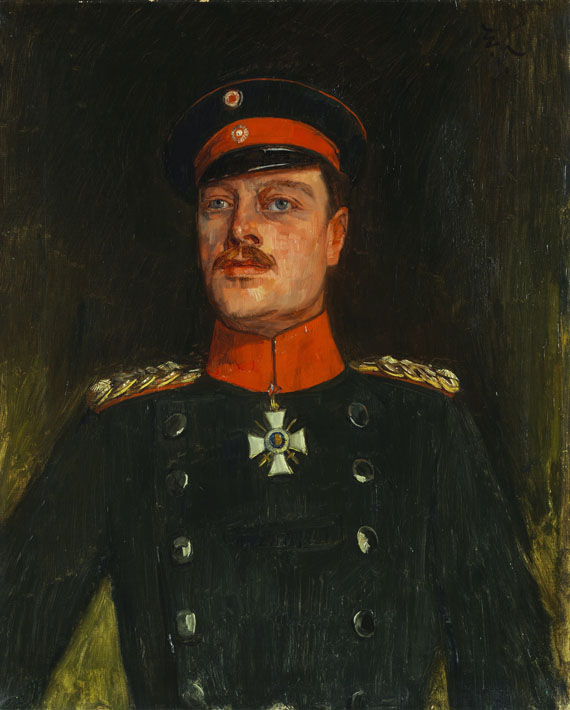 We are grateful to Dr. Klaus Rohrandt, Kiel, for the kind expert advice. The work will be included into the catalog raisonné.

At the time this portrait was painted, Wilhelm Trübner had reached the height of his success. Following his studies in Karlsruhe, Munich and Stuttgart, his contact with fellow artists such as Corinth, Slevogt and Liebermann helped Trübner develop his own broad, colorful impasto style which lends his landscapes their striking power. In 1904 he was appointed Director of the Karlsruhe Art Academy, where he also taught as a professor from 1903 to 1917. Around the year 1904, he painted bust portraits and a large-scale equestrian portrait of Ernest Louis Grand Duke of Hesse and by Rhine (1868–1937). With military careers common among the nobility at the time, the Grand Duke is depicted in his uniform. Clearly visible on his chest is the Grand Ducal Hessian Order of Philip the Magnanimous bearing the Knight’s Cross of Swords. With his reign ending in 1918, Ernest Louis was the last Grand Duke of Hesse and a key patron of the arts, above all in Darmstadt where he promoted the expansion of the artists’ colony and transformed the city into a center of Art Nouveau. Although applying his typical broad strokes in this portrait, Trübner nevertheless achieves a strikingly accurate and finely modeled portrayal of the Grand Duke’s distinctive physiognomy. [KT]
More Information
+
Sell
Get a free appraisal for a similar object!
+
Register for
Wilhelm Trübner
+
Buying from A-Z
+
Contact a specialist
+
Wilhelm Trübner Biography
Share