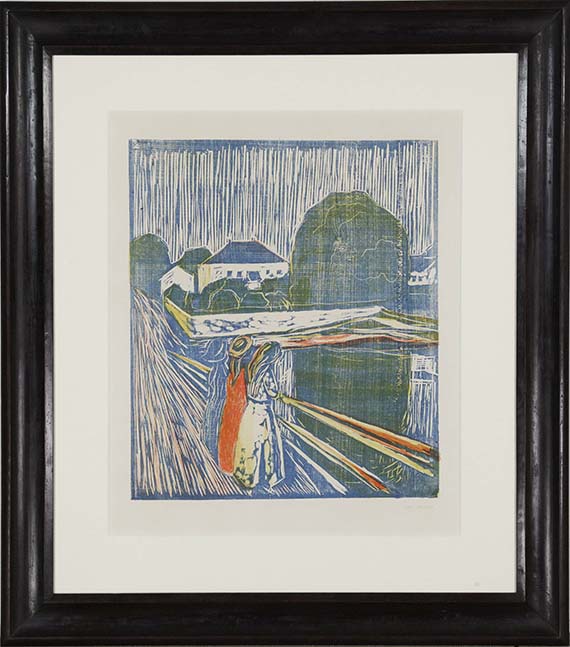 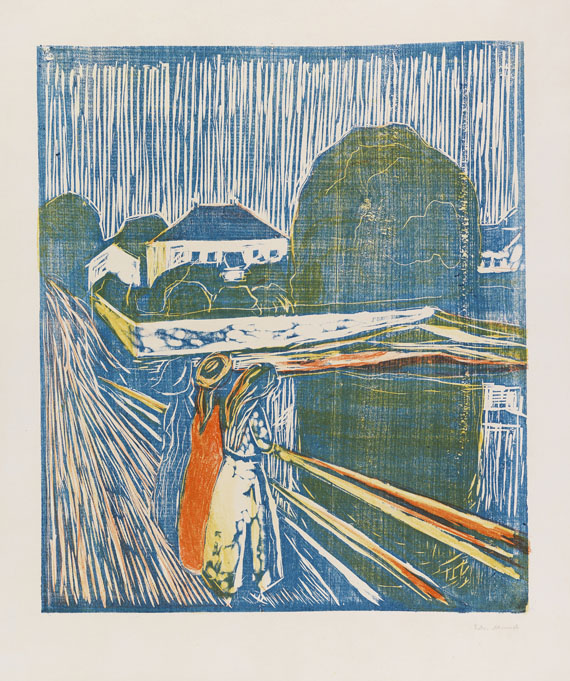 • Copies from this final state of 'Mädchen auf der Brücke' in this brilliant color variant have only been offered three times in the past 35 years (artprice.com).
• In 2016 the painting "Mädchen auf der Brücke" (Girls On A Bridge, 1902) was sold for 54 million Dollar, it was the artist's most expensive work ever on the international auction market.
• Our woodcut marks the peak of this famous motif series.
• Other copies of this woodcut are part of the collections of the Museum of Modern Art, New York, the Munch-Museet, Oslo, and the Museum of Fine Arts, Boston.

The importance of the medium of prints in the artistic oeuvre of Edvard Munch can hardly be overestimated. This plays a central role in the content and formal examination of his pictorial motifs. He skillfully uses the properties of the printmaking process to experiment with different parameters of expression in the most differentiated way. In this regard, he not only plays out the facets of printing techniques, but also opens up completely new design paths.

Once a motif has been found, Munch picks it up again and again. In his search for the perfect pictorial solution, he changes forms, style and coloring through to the technology used, in order to increase the expressiveness of his depictions. The variation in color design in his sheets is an outstanding feature of some special works. In this context, the painter Paul Herrmann reports in an impressive anecdote of a meeting with Munch in a printing shop: "Munch comes, stands in front of the line, closes his eyes tightly and blindly directs his finger through the air: >Print . gray, green, blue, brown.' [..] The printer printed like this until Munch came back and blindly ordered again: 'Yellow, pink, red..' And he did so a couple of times." (Quoted after Erich Büttner, Der leibhaftige Munch, in: Jens Thiis, Edvard Munch, Berlin 1934, p. 92.).
In the case of the woodcut offered here, the creative process could have taken place in a similar way. Several color variants of the print are known, which Munch printed in black or blue from the wood printing plate, as well as in various combinations of shades of yellow, orange, green and dark blue from one to four lithographic zinc plates. The combination of several printmaking processes, which underlines Munch's experimental handling of these forms of expression, is very rare in his oeuvre.

In the various color versions, the artist presents us a motif that he has continuously developed over more than thirty years in paintings and graphic works. In 1901 he created the first of a series of twelve paintings, ten of which are in the collections of international museums. It is a view of the town of Åsgårdstrand near Oslo, where Munch spent several summers. From 1899 on he rented a house there, which he later bought. He positions the three female figures in our woodcut on the railing of the bridge that leads to the place's jetty for steamboats. All three face the water, they fulfill the traditional function of figures from the back and draw our attention to the houses, trees and bushes in the background, which Munch effectively reflects on the surface of the water.
Through the virtuoso processing of the wooden stick with the gouge, Munch succeeds in achieving a captivating pull- and depth effect. In particular, the expressive and yet sensitively set lines in the area of \u8203\u8203 the bridge are reminiscent of Munch's probably best-known painting "The Scream". In the structures created with masterly conciseness, he incorporates the characteristics of the wooden block and thus develops an atmospherically effective and powerful pictorial statement that sets this woodcut apart from the other depictions of the famous series of motifs.

The third and final state of the depiction, to which our sheet can be assigned, has a special feature in this regard: in this final reworking of the wooden block, Munch left out the areas that were printed in the dress of the figure in the middle and brought the effect with the resulting color accents of his composition to perfection. Not only in the context of this fascinating series, but also in Munch's prints as a whole, the depiction can be considered one of the expressive highlights for its unique execution. [AM]
More Information
+
Sell
Get a free appraisal for a similar object!
+
Register for
Edvard Munch
+
Buying from A-Z
+
Contact a specialist
+
Edvard Munch Biography
Share