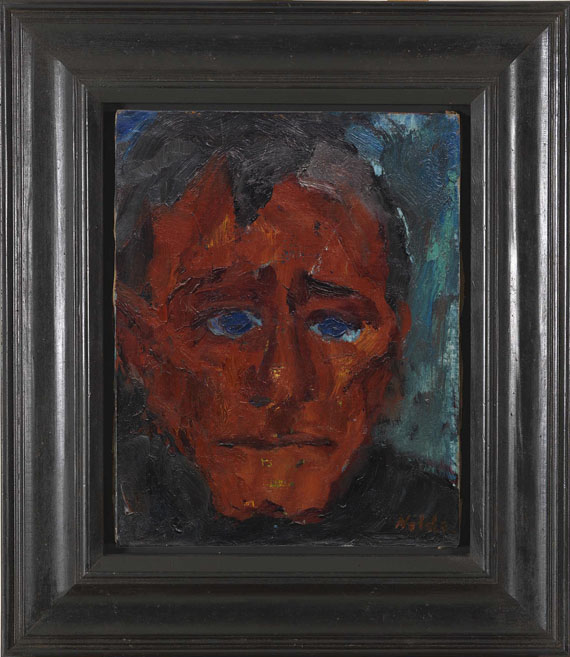 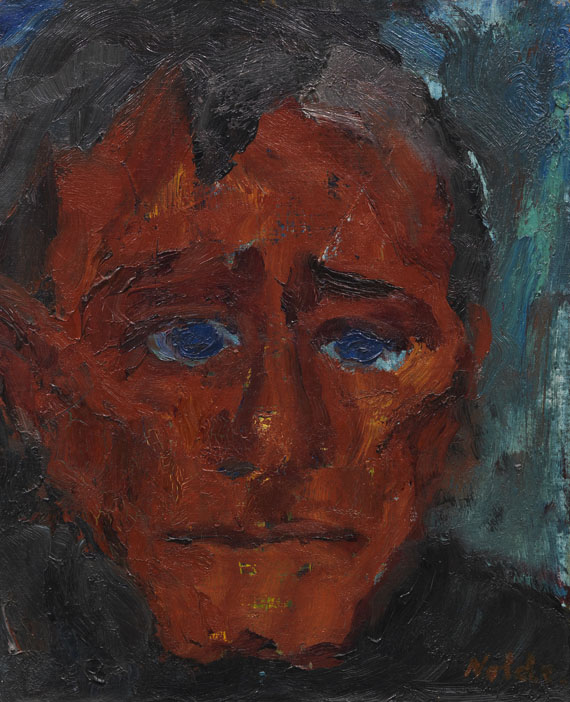 In the portrait painting of "Peter P", Emil Nolde does not so much trace the pictorial closeness of his counterpart, but rather seeks to capture his overall appearance in the effect on himself. Nolde gives the painting a remarkable and unique presence. In addition to oil painting, watercolors occupy a special rank in the painter's oeuvre, and he also held the portrait genre in high esteem throughout his life. The son of a Northern German farmer, Emil Hansen was born in the German-Danish borderland in 1867. After an apprenticeship as a furniture draftsman and woodcarver in Flensburg from 1884 to 1888, and a subsequent apprenticeship in commercial drawing in St. Gallen, he was drawn back to the countryside after stints in Berlin. He became preoccupied with the rural population and produced drawings of the local mountain farmers as early as in Switzerland in the 1890s. Meanwhile settled on the North Sea coast, Nolde again took up the theme of rural life and created the striking portrait of a young. Details about the sitter remain unknown, but it is probably a farmer from the surrounding countryside. A certain shyness and skepticism in the facial expression of Peter P is not to be overlooked, which may be due to a certain distance, which the sitter brought to the painter. Even if they shared the same roots, the painter Emil Nolde appeared somewhat exotic in the eyes of the peasants. His expressive-empathic painting style probably contributed to the distance between them and the eccentric painter. Thus, the sitter is less to be classified as an individual, but stands, in an extended understanding, for a simple life in the country, of which Nolde was also quite fond. With his wife Ada, for example, he planted a farm garden in Seebüll, and his home became a recurring subject in his painting, especially in the course of the late 1910s and 1920s. Nolde's rejection of a professorship at the Academy of Fine Arts in Karlsruhe in 1918, the year the present work was made, also underscores the importance of this subject area for Nolde. The expressive and fresh colors of the painting are also particularly noteworthy. The reddish brown of the face is dominated by a almost unreal blue eyes, which are echoed by the amorphous blue of the background. A triad of expression, color, and form becomes an eventful overall concept in the small portrait, which in its effect draws entirely on the canon of Noldean interpretations. [KD/AW]
More Information
+
Sell
Get a free appraisal for a similar object!
+
Register for
Emil Nolde
+
Buying from A-Z
+
Contact a specialist
+
Emil Nolde Biography
Share