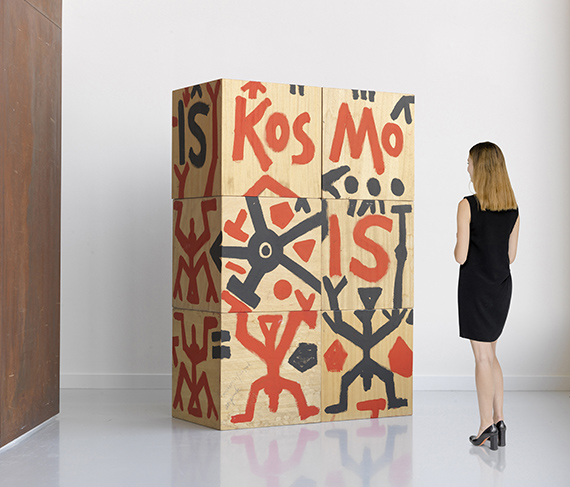 We are grateful to Mrs Brigitte Schenk, Cologne, for her kind support in cataloging this lot.

This work shows another side of Penck that is seldomly recognized. It is known that Penck dealt intensively with scientific theories and that some of his art can also be read on the basis of these theories. AR Penck was an intellectual mastermind, a lyricist and free jazz musician. The free play without specifications and the interaction with the people made A.R.Penck a lot of fun. So it could happen that he spoke in spontaneous rhyming forms and always took the liberty of alienating words from their conventional meaning or incorporating new neologisms. His speech was free and poetic, with which he consciously evaded a clear definition. By playing with language, he opens up spaces of thought, but without wanting to do without a necessary contradiction. Seen in this way, Kosmopolis can be interpreted as a challenge to us as "Homo Ludens". There is no combination that unlocks the potential of the picture cubes in a single view, the cubes want to be moved to explore the possible combinations. It is also the playful approach to overcoming the encrusted rationality of the work of art and the viewer, the activation of the passive recipient, who does not see the work statically in front of him, but instead becomes actively creative through the variation of the cubes. [EH/SN]
More Information
+
Sell
Get a free appraisal for a similar object!
+
Register for
A. R. Penck (d.i. Ralf Winkler)
+
Buying from A-Z
+
Contact a specialist
+
A. R. Penck (d.i. Ralf Winkler) Biography
Share