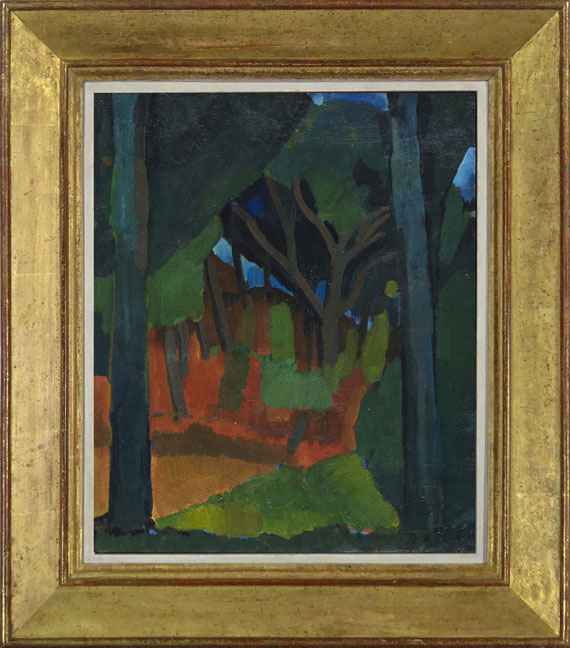 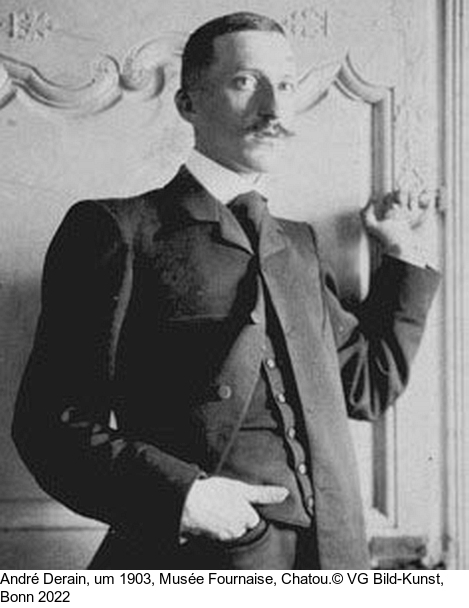 • Along with Matisse, Picasso and Braque, Derain is considered a protagonist of the French avant-gard.
• In 1905, three years before this work was made, he was a founding member, along with Vlaminck and Matisse, of the 'Fauves' at the Salon d’Automne.
• Historically highly relevant provenance, from Galerie Daniel Kahnweiler, who went down in art history first and foremost for his role as Picasso's gallerist: In 1908 he signed an exclusive contract with Derain and made this work sure for himself upon its making.
• Similar landscapes by Derain are in the most important international collections like the Centre Pompidou, the Musée d'art moderne and the Musée de l'Orangerie, Paris, the Metropolitan Museum of Art, New York, the National Gallery of Art, Washington, and Tate Gallery, London.
• From the collection of the well-known writers, sociologist and later gallerist Eric Estorick (1913-1993), who was honored with an own museum in London in 1998.


"I am down south. I am happier here than I ever have been, everything is calm in this wonderful landscape. [..] I am gonna do some serious work here and will be a true painter again. It is diffficult to paint in Paris [..] as it doesn't have enough to offer that really touches me deeply. And I believe that I have found the perfect surrounding that allows me to feel a purely painterly sensation."
André Derain an Maurice de Vlaminck, Martigues 1908, quoted from: André Derain, Lettres à Vlaminck, Paris 1994, p. 197.

Wild beginnings – the "Fauves" at the Salon d'Automne 1905
The appearance of a group of young artists in the Paris Salon d'Automne in 1905 caused a stir. The bright, colorful and vividly painted works of André Derain, Henri Matisse and Maurice de Vlaminck were exhibited together in one of the halls. In view of the wild painting of the young artists, all between twenty and thirty years old, art critics gave them the name "Fauves", not realizing that this loose association would go down in art history as one of the most important tendencies of the French avant-garde. Like other movements before them, such as the Impressionists, the young painters knew how to profitably reinterpret the actual vilification: A first comprehensive exhibition would take place at Galerie Berthe Weill, including works by Matisse, Derain, Vlaminck, Émile Othon Friesz, Albert Marquet and Raoul Dufy.

Artistic symbiosis: Matisse, Van Gogh, Cézanne and the Midi
Paris at the beginning of the 20th century was characterized by a highly dynamic atmosphere between critics, artists and gallery owners, shaped by the idea of \u8203\u8203 progress and a radical break with tradition, which produced new forms of painterly expression at ever shorter intervals. This applies above all to central artistic personalities of the avant-garde such as Derain, Matisse, Picasso and Braque, who - as soon as they began to affirm a direction - were already breaking new ground again. The young Derain first painted the Seine landscapes with Vlaminck in Chatou, a town west of Paris. The proximity to Paris quickly gave his work momentum: he met Matisse while copying in the Louvre, visited exhibitions with works by Vincent van Gogh, Paul Cézanne and Paul Gauguin. Formative for the birth of the "Fauves" was the stay with Matisse in Collioure in the very south of the French Mediterranean coast, during which powerful landscapes in broad brushstrokes emerged during the final days of Neo-Impressionism. In search of intensive color and light impressions away from the big city of Paris, the French Midi became the new preferred place of a primal, natural creativity for the artists. This arose from the close connection between landscape and artist, who rendered the individual effect in his own expressive visual language.

Networks: the young Kahnweiler as gallerist of the avant-gard
The gallery owners, who were always on the lookout for new talents, played an important role in this emerging avant-garde. Derain was quickly represented by Ambroise Vollard, the gallerist of Renoir, Cézanne, Picasso and Matisse. A young German, just 23 years old, would be more important to him: Daniel-Henry Kahnweiler, who came to Paris for a job at the stock exchange which soon bored him. Fascinated by the Parisian art world, Kahnweiler decided to found a gallery and in 1907 rented the small room of a Polish tailor in his residential building. In the Paris Salon des Indépendants he was enthusiastic about the works of Vlaminck and Derain and bought his first paintings, as well as those by Braque and Picasso, in whose studio he witnessed the creation of the world-famous "Demoiselles d'Avignon" and the birth of Cubism in 1907. His business model was to sign exclusive contracts with the artists he represented, which secured him the entire production, as was the case with Derain in 1908. The gallery program quickly aroused the interest of courageous and equally well-funded international collectors such as Roger Dutilleul, Gertrude Stein or Sergej Shchukin. In addition, Kahnweiler was an excellent networker with connections in Germany e. g. to Alfred Flechtheim.

Despite Derain's close acquaintance with the pioneers of Cubism, Picasso and Braque, he did not follow them on their path. His gallerist Kahnweiler saw him, along with Cézanne, as a painter of transition, whose paintings best visualize the tension of an “in-between”. After the end of late Neo-Impressionism and the "Fauves", Derain's forms began to consolidate again around 1908, without following the subsequent fragmentation of Cubism. During his stays in the Midi with Matisse, Picasso or Braque, he remained loyal to Marseille and the Côte d'Azur with the small towns of Cassis, Cagnes-sur-mer and L'Estaque, for which he began to search for new principles of representation. From May to the end of November 1908 he stayed in Martigues on the coast west of Marseille and immersed himself in the warm southern landscape. He rendered the pine groves on the steep coast in cool deep green and indigo blue tones, while the intense blue of the Mediterranean sky shines behind the treetops; the ground, covered with dry needles, glows in red ochre. Simplified and reduced to the essentials, the contrasts between cool and warm, dark and light tones increase to an almost physical sensation. It is also fascinating how Derain arranges colors and forms on the picture‘s surface and at the same time leads us into the depths of the warm forest. In this landscape painting "Arbres aux environs de Martigues" the importance and inspiration of the south of France for Derain is concentrated, which helped him to his artistic breakthrough and provided him with motifs that were the basis of his artistic development. It is a document of the confrontation with important predecessors such as Cézanne and contemporaries such as Picasso. Last but not least, the provenance from Daniel-Henry Kahnweiler's gallery makes the work, in addition to its wonderful motif, a unique, art-historically multifaceted testimony to French modernism. [KT]
More Information
+
Sell
Get a free appraisal for a similar object!
+
Register for
André Derain
+
Buying from A-Z
+
Contact a specialist
+
André Derain Biography
Share