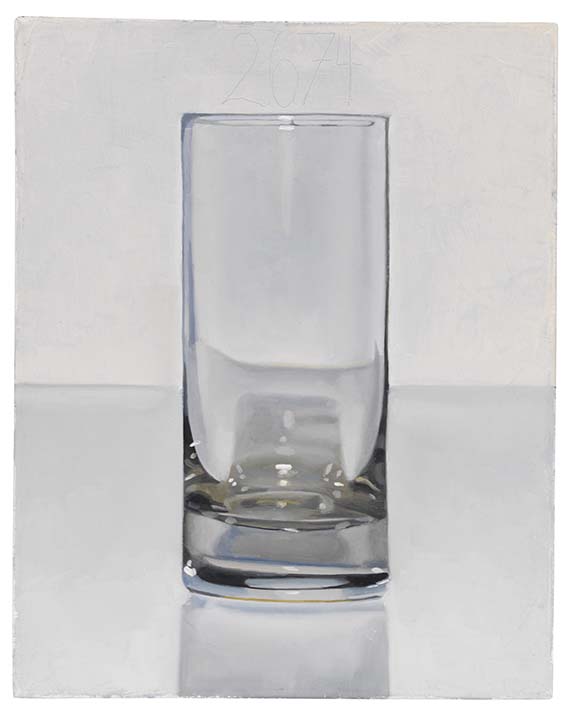 221
Peter Dreher
Tag um Tag guter Tag (Nr. 2672-2675), 2012.
Oil on canvas
Estimate:
€ 30,000 / $ 30,000
Sold:
€ 43,750 / $ 43.750
(incl. surcharge)
Tag um Tag guter Tag (Nr. 2672-2675). 2012.
Oil on canvas.
Each with the number scratched into the wet paint in top center. Each signed and dated on the reverse. Each 25 x 20 cm (9.8 x 7.8 in).
Four paintings from the night series for which Dreher illuminated the glasses with a spotlight. [AM].
• Four consecutively numbered works from "Tag um Tag guter Tag", which presumably is Peter Dreher's most famous series.
• Since 1974 the artist makes more than 50 paintings a year in which Dreher depicts a glass of water in photo-realistic manner in front of a light background.
• In "Tag um Tag guter Tag" a singular perspective in contemporary painting that combines simplicity, repetition and prosaicness become manifest.
• Other paintings from this important series are in possession of, among others, the Museum für Moderne Kunst, Frankfurt, and the Staatliche Kunsthalle, Karlsruhe.

In 1972, Peter Dreher painted the first of his well-known glass paintings. In the years that followed, numerous more were created, in which he characterized the empty glass of water on a table in front of a white wall.
Rather than still lifes, the small format works appear to be portraits. They appear to be small-format individual portraits, in which not only the nature of the glasses, their surface and the incident light, but also their character and individual expression should be apparent. The aspect of time plays an important role within this central series of works. Distinguishable in a day and night series, the artist captures the tiniest changes in light at different times of the day and seasons, from various reflections, shading and reflections on the glass surface, thereby elevating this ordinary-looking everyday object into an expressive and fascinating motif. [AM]
More Information
+
Sell
Get a free appraisal for a similar object!
+
Register for
Peter Dreher
+
Buying from A-Z
+
Contact a specialist
Share