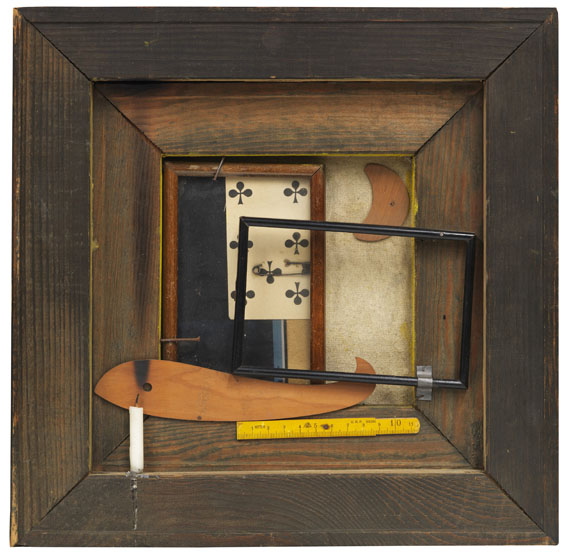 • Top work of Dadaism.
• In 1919, the artist founded the group "Stupid" with her husband Anton Räderscheidt, Angelika and Heinrich Hoerle and others.
• From the period of parallel existence of Dada Cologne and the group 'Stupid' that lasted only a few months.
• Absolute rarity: due to the turmoil of the war and her private fate, Hegemann's early work is basically lost.
• A lively artistic presence and unwavering urge to create characterize the Cologne avant-garde around 1920.
• Evidence of the artistic closeness to the works of Max Ernst and Kurt Schwitters, but Hegemann creates her own canon of forms and her personal symbolism.
• As part of the so-called 'lost generation', Hegemann-Räderscheidt's work, defamed as 'degenerate' by the National Socialists, falls into oblivion and is only rediscovered in the course of the gradual re-evaluation of female artists.

We are grateful to Prof. Dorothy Price, Courtauld Institute of Art, London, for her kind assistance in cataloging this lot.

"The same felicitous properties (like the same play of forms as in Max Ernst's art) in Marta Hegemann is absolutely obvious. One can almost fall in love with her pictures, with her funny enumeration of things."
Art historian Alfred Salmony, 1926, Richmond Gallery Cologne, in: Cicerone, XVII year, issue 24, 1926, p. 810.
"It turns out that art history was ultimately the greatest enemy of painting and sculpting women."
From: Kia Wahland, Die vergessenen Werke der Frauen, Süddeutsche Zeitung, October 13, 2019.

Marta Hegemann was a Cologne-based artist who began her working career during the 1920s and who remained active until just before her death in 1970. Like so many women artists of her generation, she has been overlooked within the masculinist histories of art that have favoured celebrations of the careers of male artists over that of women. She was actively involved in the avant-garde art scene in Cologne and moved between the networks of artists and promoters involved in both Cologne Dada (Max Ernst, Johannes Baargeld, Hans Arp, Angelika Hoerle, Otto Freundlich and others), and her own radical avant-garde group, Gruppe Stupid, founded with fellow artists, her husband Anton Räderscheidt at their home, Hildeboldplatz 9, together with Heinrich and Angelika Hoerle, Franz Seiwert and Willy Fick.

From 1919 onwards Hegemann’s public exhibiting career was remarkable. In between having two children, she also exhibited almost every year in individual and group exhibitions until 1933. Although like many of the avant-garde modernists of her generation, she was declared a ‘Degenerate Artist’ under National Socialism and banned from publicly exhibiting, she subsequently found a means to sell her work privately before returning to public exhibition in 1954. She then continued to exhibit her work regularly in Germany until 1969, a year before her death. Such tenacity, often in the face of extremely difficult circumstances, is characteristic of her single-minded approach to artmaking that sustained her through the turbulent times in which she lived.

Gruppe Stupid was likely founded at the start of her career, during the summer of 1919 and ran alongside Cologne Dada for a short time. Whilst Gruppe Stupid was only active for a few months, the group nevertheless held exhibitions and produced a catalogue and three print portfolios, amongst other works, including the untitled assemblage offered here. What is especially important about this early work is that it categorically situates Hegemann at the heart of the radical avant-garde experimentation with form, materials and meaning being worked through by the Dadaists and it was likely produced in collaboration with similar experimentations at the time being undertaken with Max Ernst and Kurt Schwitters. This work is full of many of Hegemann’s characteristic symbols, ones that also feature in her paintings of the same era including the snuffed-out candle (perhaps alluding to traditional memento mori) the fish (and allusion to her best friend and Dadaist Angelika Hoerle) and a moon (indicative of the cycles of night and day). The inclusion of the tape measure, the safety pin, the nail and the metal frame seemingly randomly attached to the outer wooden edge of the assemblage bear close comparison with Max Ernst’s The Fruit of Long Experience, an assemblage of the same date suggesting that quite possibly, as in many other examples of their practice at this date, the two of them worked in tandem as part of a collaborative network of art-making practices.


Traditional art historical focus on the primacy of the individual male artist has done a great disservice to the messier aspects of collaborative modernism and the role of women artists within it. The long neglect of Marta Hegemann’s incredibly rich body of avant-garde practice and her key role within the networks of the Cologne avant-garde deserve to be more widely known and recognized. After Gruppe Stupid formally disbanded, she continued to be extremely active in the Cologne art scene, producing numerous works and regularly appearing as a model for August Sander’s photographic project People of the Twentieth Century. Her active artistic avant-garde presence is visible in all aspects of the Cologne avant-garde, we just need to have open our eyes a little wider to see it.

Marta Hegemann and "Cologne Progressive"
In 1918, Marta Hegemann married her fellow student Anton Räderscheidt, who, just like her, was deeply involved with the Cologne art scene. In their apartment at Cologne's Hildeboldplatz 9 they organized exhibitions and artists' meetings. "Gathering point Hildeboldplatz. Loud songs and chants permeated the rooms, which, richly adorned in various colors [..] provided the perfect backdrop for pictures and sculptures. Debates until daylight broke." (Marta Hegemann, in: Erinnerungen (transcr. by Johann P. Räderscheidt), quoted from: ex. cat. Marta Hegemann. Art – ein Gleichnis des Lebens, Berlin 1998, p. 15) At around this time Max Ernst moved to Cologne, where he established close contact with the artists Hans Arp, Otto Freundlich, Angelika and Heinrich Hoerle, Franz Seiwert and Paul Klee, who were also based there. Back then Max Ernst and Marta Hegemann kept company with people from the same circles, for in summer 1919, Hegemann and her husband Anton Räderscheidt, Angelika Fick-Hoerle, her brother Willy Fick, Heinrich Hoerle and Franz Seiwert decided to work together in an artist group they named "Stupid". They regarded themselves as a secession of the Cologne Dadaists, in cloak-and-dagger operations they put artistic manifestos on advertising pillars and construction site fences. Max Ernst and his wife, the art critic Luise Straus-Ernst, belonged to the circle of acquaintances of the group, which presumably found inspiration for its name in a term from Max Ernst's six-part satirical magazine "The Ventilator", published in spring 1919, in which Max Ernst referred to the editors and the staff, among them Otto Freundlich, Angelika and Heinrich Hoerle, as well as to himself as the "Stupidians". Although Hegemann and Räderscheidt had to provide for two sons and only had meager financial means, both gave up their teaching activities in favor of pure artistic creation. Hegemann wrote about that time: "During that time, we were freezing, we were starving, we were partying, but above all, we were on a quest. And this quest was incredibly invigorating." (from: Marta Hegemann, memories, quoted from: ibid., p. 14).

The "Lost Generation"
While Anton Räderscheidt's career is extensively documented, there is only scant information about Marta Hegemann's life and work, although she had a remarkable number of exhibitions during her creative years in Cologne from 1919 onward. In the 1920s and early 1930s, Hegemann's progressive works, which she dedicated to the image of the "new woman" in particular, was shown all over Germany, among them at the Kunstpalast and the Kunsthalle in Düsseldorf, the Suermondt Museum in Aachen, in the exhibition of the Deutscher Künstlerbund in Essen, in the Kölnischer Kunstverein, in the Berlin Secession and the Berlin Kronprinzenpalais, the Kunsthütte Chemnitz, the Hamburger Kunstverein, the Kasseler Kunstverein, Städtisches Museum in Wuppertal and the Staatliche Museum in Saarbrücken. Under the National Socialists, both Marta's and Anton Räderscheidt's artworks were defamed as "degenerate", both were banned from exhibiting and their works were removed from museums. At the same time, she broke up with Anton Räderscheidt, which led to a permanent change of location: during these years, Hegemann moved from Berlin to Geneva, on to Paris, Heidelberg, Munich, Strasbourg and Iserlohn, before eventually returning to Cologne after the end of the war. Her busy, restless life and the turmoil of the war with air raids and lootings led to the tragic loss of many her works - a fate she shared with numerous artists of her generation, which today are generally referred to as the "lost generation". The term was coined by the art historian Rainer Zimmermann (1920-2009) in 1980 analogous to the term "Lost Generation" chosen by Hannah Arendt and Getrude Stein for the American generation of writers of the 1920s.

"Why have there been no great women artists?" Hence the works from Marta Hegemann are only known to a small circle of expert art lovers today. Single works can be found in the collection of the Museum Ludwig in Cologne and the Böhme Collection / Das Museum Kunst der Verlorenen Generation (The Museum of Art of the Lost Generation) in Salzburg. From time to time her works appear on the European auction market. Only a few exhibition catalogs and monographs examine her life and her impressive artistic work, but her name is mentioned in particular in connection with the oeuvre of Anton Räderscheidt, whom she was married to until 1934. As early as in 1971, the American art historian Linda Nochlin (1931-2017) asked the question "Why Have There Been No Great Women Artists?" in her famous essay. In the course of the comprehensive reassessment of the art-historical contributions made by female artists that has been pushed forward since then, numerous female positions, biographies and works that had previously remained unnoticed, have moved into the focus of museums, institutions and the art trade in recent years, among them the painter and illustrator Dörte Clara Wolff, called Dodo (1907-1998), to whom the State Museums in Berlin and the Jewish Museum of Art in London dedicated a comprehensive retrospective in 2012. In 2017, the oeuvre of her contemporary Jeanne Mammen (1890-1976) was highlighted in a retrospective at the Berlinische Galerie in Berlin. In 2017/18, the Kunsthalle Hamburg hosted the first comprehensive exhibition on the fascinating painter Anita Rée (1885-1933), and in 2019 the Frankfurt Städel Museum examined the work of the Jewish artist Lotte Laserstein (1898-1993), who eventually emigrated to Sweden, in a highly acclaimed exhibition. In the 2020 exhibition "Umbruch", the Kunsthalle Mannheim examined, among others, the forgotten female side of New Objectivity, especially the long-overlooked and underestimated art of Anita Rée, Jeanne Mammen and Hanna Nagel (1907-1975). And until the beginning of this year, numerous works by the surrealist artist Marie Cermínová (1902-1980, pseudonym TOYEN), who had fallen into oblivion during her lifetime, was on display at the Kunsthalle Hamburg.

Time and again, Marta Hegemann's works also find their way into current museum exhibitions. But in view of her diverse and impressive oeuvre, she should receive the attention she deserves in the years to come. [CH]
More Information
+
Sell
Get a free appraisal for a similar object!
+
Register for
Marta Hegemann-Räderscheidt
+
Buying from A-Z
+
Contact a specialist
Share