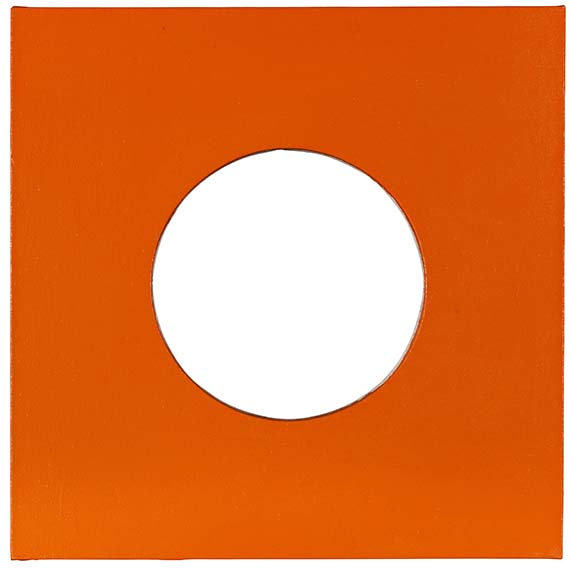 174
Steven Parrino
Fink Heavy, 1997.
Mixed media on canvas, clamped on panel
Estimate:
€ 70,000 / $ 81,200
Sold:
€ 81,250 / $ 94.250
(incl. surcharge)
Fink Heavy. 1997.
Mixed media on canvas, clamped on panel.
Signed, dated, titled and inscribed with direction arrows on the reverse. Right edge with the stamped artist's name and the date. 61 x 61 x 4 cm (24 x 24 x 1.5 in).
[AR].
• Gashed or folded canvasses in mochrome colors are characteristic of Steven Parrino's artistic concept.
• Fink Heavy is the name of a type conceived by Ed "Big Daddy" Roth, who, alongside Russ Meyer, had a major impact on the artist's creation.
• The early deceased artist was represented by Gagosian Gallery in New York, which helped him to great posthumous recognition.
• Shortly after his death, Steven Parrino was honored with two comprehensive museum retrospectives: In 2006 at the Musée d'art moderne et contemporain in Geneva and in 2007 at the Palais de Tokyo in Paris.

"When I started making paintings, the word on painting was PAINTING IS DEAD. I saw this as an interesting place for painting..death can be refreshing.."
Steven Parrino, The No Texts, 2003, p. 43.

In 2007, Jerry Saltz, one of the most important contemporary American art critics, visited an exhibition by the artist Steven Parrino, who had died two years earlier, at the Gagosian Gallery in New York. A selection of works from different creative periods was shown. Drawings from the early years, as well as his so-called "misshaped canvases" - canvases cut, folded or torn from the frame, painted in the same colors of blue, silver, black, red or orange. Jerry Saltz then published an article in New York Magazine entitled "The Wild One" in which he says: "He vividly demonstrates that no matter what you do to a canvas - slash, gouge, twist or mutilate it - you can't actually kill it. Painting lives, and so, for the moment, does Parrino's work." (Jerry Saltz, The Wild One, New York Magazine, 2007). In doing so, he sums up what is so fundamental to understanding Steven Parrino's work, because his art is first and foremost anchored in painting. Comparisons to the incised canvases by Lucio Fontana or the folded paintings by Piero Manzoni are just as obvious as influences from the work of Donald Judd or Frank Stella. His works are part of a tendency in 20th century art that examines the question of the limits of the image carrier in painting, searches for a new meaning of this traditional medium and in one way or another strives for more three-dimensionality.

One aspect that distinguishes Steven Parrino's work from other artistic positions are his role models that he found in American punk, pop and subculture, which the titles of his works suggest. For example, "Fink Heavy" is a typeface developed by Ed "Big Daddy" Roth. He is credited with inventing Rat Fink, an anti-hero to Mickey Mouse, and is best known as a co-founder of Kustom Kulture. Alongside Russ Meyer, he is one of Steven Parrino's great role models, who is repeatedly described as an enthusiastic motorcyclist in the obligatory leather jacket. Music, especially punk and rock, also had a major influence on the artist. The list of models could be continued, although they are rarely directly recognizable in the artist's reduced works. He succeeds in translating the influences, which he himself repeatedly names in interviews, into his own artistic language and his unconventional view of painting. Or as a publication by the Skarstedt Gallery put it so aptly: "With an uncompromisingly nihilist attitude, Parrino mirrored the rebellions of the American punk music scene and subcultures in many ways, translating that chaotic spirit in his work." (cf. Steven Parrino. Paintings and Drawings 1986-2003, online: https://www.skarstedt.com/publications/steven-parrino). [AR]
More Information
+
Sell
Get a free appraisal for a similar object!
+
Register for
Steven Parrino
+
Buying from A-Z
+
Contact a specialist
Share