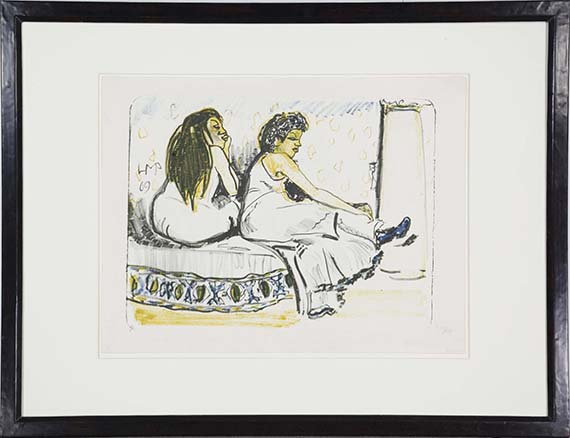 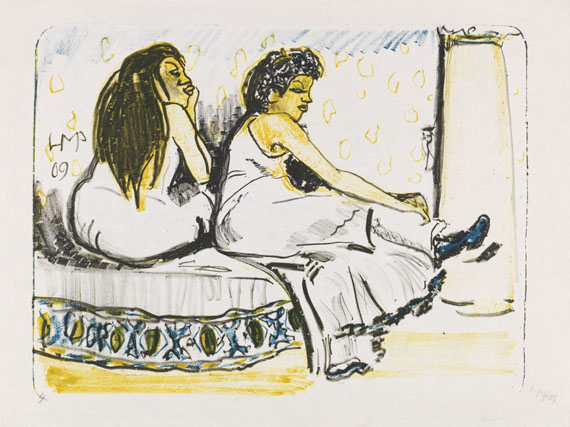 • Impressive, large-sized print from the "Brücke" era.
• Of utmost rarity, to date only two copies from this state are known.
• Hand-made proof that is particularly captivating for its striking colors.

The large-format lithograph "Im Harem" was created at a time when Hermann Max Pechstein was intensively involved with graphics. It is true that he made his first woodcuts as early as in 1906, but it was only after a longer stay in Paris that he increasingly began to work on etchings and lithographs. In Berlin, where he moved in 1908, his lithographic work in particular reached its first peak by 1909. Several colorful and large-format works were made, including our copy of "Im Harem". The vital spontaneity and immediacy of the expression that characterizes the early works of the "Brücke" artists, is clearly evident in the depiction of the figures. Pechstein himself was particularly fond of the technical execution, which he described in retrospect as follows: "I immediately threw the chalk onto the stone, in order to attain, through lamination and etching, a lithography that doesn't just rest on the surface. There, without a press , the prints were made by hand." (Hermann Max Pechstein 1921, quoted from: Günter Krüger, Das Druckgraphische Werk Max Pechsteins, Hamburg 1988, p. 13) Of the early hand prints described here, usually no more than five to ten copies were made. Only a few prints of "Im Harem" are known. What is so unusual is that Pechstein designed three different color variations and revised the depiction in the final state. Pechstein usually only started with the graphic execution after he had already developed a precise idea of \u8203\u8203 the pictorial concept. In terms of motif, the work shows one of his central themes, as Paul Fechter described as early as in 1921: "Pechstein's graphic works seem […] like a song to a woman that begins over and over again. [..] He comes closest to the life he loves in the woman: his vision of existence gains the purest expression in and with her." (Paul Fechter, Das Graphisches Werk Max Pechsteins, Berlin 1921, p. X) Motif, colorfulness, technique and last but not least the expressive style of the "Brücke" artists characteristic of this time make the sheet a particularly impressive example of Hermann Max Pechstein's expressionist print art. [AR]
More Information
+
Sell
Get a free appraisal for a similar object!
+
Register for
Hermann Max Pechstein
+
Buying from A-Z
+
Contact a specialist
+
Hermann Max Pechstein Biography
Share