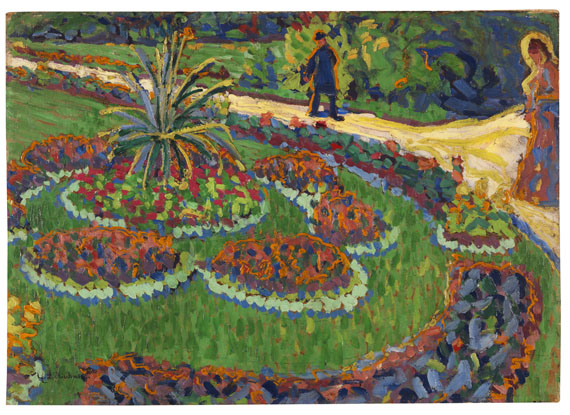 • Significant, particularly early document of Kirchner's expressionist color palette.
• On public display the year it was made.
• In 1906, the year the work was made, Emil Nolde became a member of the "Brücke" and inspired the young artists.
• In this work, the architect E. L. Kirchner examined the park of the 'Großer Garten' in Dresden, which was laid out after French models.

Accompanied by a written confirmation from Prof. Dr. Donald E. Gordon, Pittsburgh, from December 18, 1976 (in copy).
The work is documented in the Ernst Ludwig Kirchner Archive, Wichtrach/Bern.

"I met a handsome upright young man with a great passion and an admirable happy-go-lucky nature, as well as with a rousing laugh. He was obsessed with artistic things and thoughts and had an almost furious urge to draw and paint."
Fritz Bleyl about Ernst Ludwig Kirchner, in: Hanz Wenzel, Bildnisse der Brücke-Künstler voneinander, Stuttgart 1961, p. 23.

"We were proud members of a mission, artistically akin to the Dutchman van Gogh and the Norwegian Edvard Munch."
Max Pechstein on the early art of the "Brücke", in: Max Pechstein. Erinnerungen, Stuttgart 1991 (reissue), p. 23.

The Founding Period of the Artist Group "Brücke"
Before Fritz Bleyl, Erich Heckel, Karl Schmidt-Rottluff and E. L. Kirchner devoted themselves entirely to painting, even before they founded the artist group "Brücke" in 1905 and would go down in art history as one of the most important representatives of Expressionism, they met as young students of architecture at the Royal Saxon Technical College in Dresden. In retrospect, Bleyl wrote about Kirchner: "I met a handsome, upright young man with the utmost self-confidence, the strongest passion, who had a wonderful carefree nature and a rousing laugh. He was positively possessed by a fury to draw, to paint, to occupy himself with artistic things and thoughts and to get to their bottom. His 'shack' was that of an outright bohemian, full of colorful pictures, drawings, books, with painting and drawing utensils strewn all over the place, far more the kind of romantic dwelling you’d except of a painter than the home of a neat student of architecture." (Fritz Bleyl, Erinnerungen, in: Hanz Wenzel, Bildnisse der Brücke-Künstler voneinander, Stuttgart 1961, p. 23).
Even then, E. L. Kirchner and his fellow students were more concerned with the fine arts, with painting, than with architecture. Kirchner particularly liked the reformatory efforts of his teacher Fritz Schumacher (1869-1947). In 1903 he then spent a semester at the "Lehr- und Versuchs-Ateliers für angewandte und freie Kunst" (Teaching and Experimental Studios for Applied and Liberal Arts) in Munich, founded by Hermann Obrist (1862-1927). Obrist is known for his arts and crafts designs, drawings and sculptures inspired by the Arts and Crafts movement. With him, Kirchner learned progressive, artistic thinking drawn from life and with a focus on intuition, spontaneity and the own creative power. The idea was to integrate sensual perception into art as a subjective process of experience, to elevate it to a guiding system for one's own creative work. This idea would later become formative for the expressionist art of the "Brücke". In these years Kirchner was surrounded by artists and artistic tendencies that shared the aim to overcome formalism and conservative academy teachings, and who also brought him closer to the connection of art and everyday life. This approach should accompany him throughout his entire life.


Emil Nolde, "Van Goghiana" and French Idols
In June 1905, E. L. Kirchner and his fellow students, who at that point considered themselves painters and visual artists, founded the artist group "Brücke" in Erich Heckel's studio. During this period he followed the artistic innovations from France, the "Nabis" and the Post-Impressionists with great interest, and examined the painting of Edvard Munch, Gustav Klimt and, in particular, Vincent van Gogh, who had died a few years earlier. In November 1905, Galerie Arnold in Dresden showed more than 50 works by the Dutch artist in a highly acclaimed retrospective organized by the Berlin gallery owner Paul Cassirer. Up to this point, most people in Germany, and Kirchner as well, had presumably seen van Gogh's colorful works merely in form of black-and-white reproductions; in the Dresden exhibition, the full force and expressiveness of his works would show – a revelation and a key experience, also for the young "Brücke" artists. Fritz Schumacher, Kirchner's professor at the academy, explained in retrospect that his students were "out of control" at the time. To my horror, they began "to draw in a most disorderly manner. I blamed it on the influence of a van Gogh exhibition that was causing a stir in Dresden at the time. But in truth, the future broke through here, and an invisible change of profession took place" (Fritz Schumacher, Stufen des Lebens. Erinnerungen eines Baumeisters, Stuttgart 1935, p. 283).

The works of the self-taught artist van Gogh inspired through the wild originality of their painting style, through the freedom of form and their strong colors. Accordingly, owing to this new idol, things got a lot more boisterous in the "Brücke" studio, too: dynamic drawings were born directly out of the moment, and in painting the young artists began to apply the paint onto the canvas straight from the tube without prior mixing. E. L. Kirchner attained entirely new ways of artistic expression and recognized elements in van Gogh's art that helped him to pursue his own path of a radical renewal of art. Painting style, colorfulness and structure changed fundamentally. Emil Nolde joined the artist group in March 1906 – albeit only for a few months – at a point when the general enthusiasm for van Gogh was particularly great, and mockingly suggested that his much younger fellow artist should call themselves "Van-Goghiana" instead of "Brücke" (cf. ex. cat. Max Pechstein. Werke aus dem Brücke Museum, Berlin 2001, p. 37). The present work from 1906 also shows a multitude of contrasting, bright colors in confidently and impasto juxtaposed dots and short, vigorous brushstrokes, which inevitably recall the painterly structure and flow of van Gogh's paintings. At the same time, the influence of the 13 years older Emil Nolde are also revealed: the subject matter, the bold coloring and the impasto application of paint clearly refer to the works of Nolde, a lover of nature and gardens, with which Kirchner certainly dealt very intensively in this year of Nolde's membership in the "Brücke".

Kirchner's preoccupation with contemporary artistic trends and his quest for innovation and reform, however, led him to discover other sources of inspiration. In particular his park landscapes, such as "Parksee, Dresden" (Galerie Neue Meister, Staatliche Kunstsammlungen Dresden) and also the painting "Im Park" offered here, in which Kirchner depicts two strollers next to a colorful flowerbed laid out in ornamental patterns with a splendid agave in the ‘Großer Garten’ in Dresden, which was created at the end of the 17th century, testify to his examination of the color theory of the French Impressionists and Post-Impressionists. Here, for example, Kirchner integrated the decompositions of Paul Signac and, owing to the unusual picture detail and the slightly oblique perspective, possibly refers to the scenes in Félix Vallotton's paintings, such as "Le Ballon" (1899, Musée d'Orsay, Paris), which often go beyond the edges of the picture.


"Immediate and Unadulterated"
Although Kirchner's great reverence for the progressive European artists of the time initially seemed to stand in the way of his own artistic position, the intensive examination of contemporary influences and models also boosted the development of Kirchner's own expressionist pictorial language. He eventually succeeded in expressing his artistic goals, the direct and unadulterated, brilliant and powerful rendition of his own perception, of the subjective experience. The early creative period of the "Brücke" gave Kirchner the self-confidence to work on his own brushstroke and expressionist style, to eventually attain an expressiveness that was more extreme than that of his fellow European artists. Together with the other artists, he finally developed the more mature "Brücke" style, which remains unmistakable to this day and which would bring about the very radical innovation in German art they had so deeply longed for - as the artist noted in 1906, the year the present work was created: "With the belief in development, in a new generation of creators as well as art lovers, we summon the youth, and as a youth that is the future, we ask the well-established older forces to let us live and work in freedom. Everyone is part of us who reflects his creative urge directly and unadulterated." (E. L. Kirchner, 1906, quoted from: ex. cat. E. L. Kirchner. Retrospektive, Städel Museum, Frankfurt am Main 2010, p. 56).

Hence the work offered here is not the work of a mature, settled artist or of a genius tormented by his own psyche yet. At that point Kirchner was not the successful expressionist who would leave a mark on German art history with his radical innovations, not the painter who fled the big city to find inspiration in nature. On the contrary, this work illustrates the youthful creative urge and progressive attitude of a passionate E. L. Kirchner in the midst of a stimulating, revolutionary creative phase just a few months after the artist group had been founded. [CH]
More Information
+
Sell
Get a free appraisal for a similar object!
+
Register for
Ernst Ludwig Kirchner
+
Buying from A-Z
+
Contact a specialist
+
Ernst Ludwig Kirchner Biography
Share