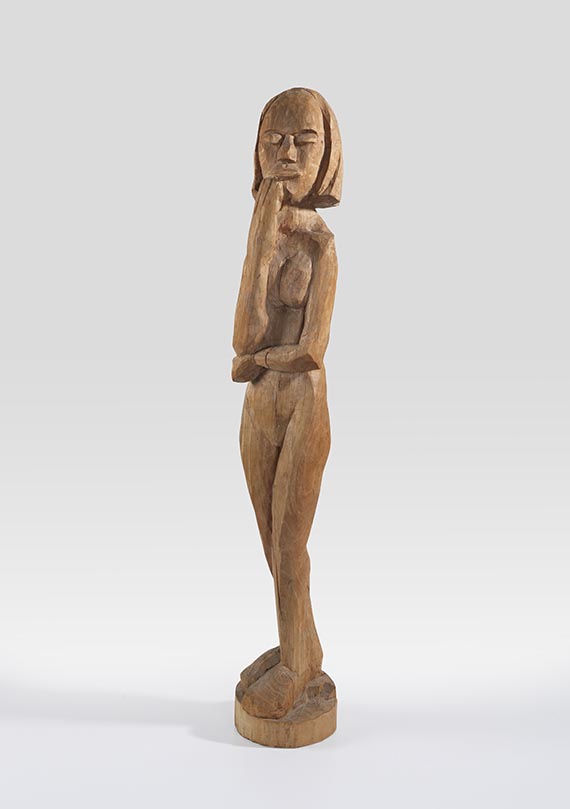 enlarge image
+
11
Erich Heckel
Stehende, 1920.
Poplar Sculpture
Estimate:
€ 600,000 / $ 552,000
Sold:
€ 745,000 / $ 685,400
(incl. surcharge)
Stehende. 1920.
Poplar Sculpture.
Vogt Plastik 12. Hüneke 1920/7. With the artist's name on the stand. Height: 79 cm (31.1 in).
[SM].
• Of utmost rarity – this is the first time ever that a wooden sculpture by Heckel is offered on the international auction market.
• The accomplishments that Heckel and Kirchner made in early 20th century sculpting are outstanding – in this genre they challenged traditions even more radically than in painting.
• 5 of the 7 preserved sculptures are in the estate or museum-owned.
• This presumably is Heckel's last available wooden sculpture.
• A museum-quality masterpiece that looks back on an international exhibition history.

"Kirchner brought the woodcut from Southern Germany [..]. Heckel carved wooden figures again; in his figures, Kirchner enriched this technique with painting".
Ernst Ludwig Kirchner in the Brücke Chronicle from 1913.

"What struck my friend (Mrs. Stoub) most in the apartment were the larger-than-life wooden sculptures Heckel had created. My friend was so enthusiastic about these sculptures that she was able to persuade Heckel to sell them to her. We took them immediately, these 'Wild Indians', at least that's what they looked like, or what else they were supposed to represent. Their heads stuck out of the car."
Walter Kaesbach's memories of Erich Heckel's early years in Berlin, in a conversation with Roman Norbert Ketterer, quoted from: R. N. Ketterer, Dialoge, Stuttgart 1988, p. 19.

The 1910 "Brücke" exhibition at Galerie Arnold in Dresden was the first to include a few small sculptures by Erich Heckel and Ernst Ludwig Kirchner. Not mentioned in the catalog, a photograph by Kirchner shows them placed on a mantelpiece. (Fig.)

The photo shows seven small sculptures on the mantelpiece, presumably the first evidence of expressionist sculpture in an exhibition. Although they cannot be clearly identified from the photo, Wenzel Nachbaur, long-time assistant of Roman Norbert Ketterer, fortunately was able to determine them according to information provided by Heckel. Accordingly, we see from left to right: a female half-nude in pewter from Kirchner, made before 1910; a much smaller squatting wooden figure by Heckel; Kirchner's "Hockende" (squatting woman), a lost pewter figure, 1909; a clay relief with lovers, also by Kirchner. These are followed by two other carved wooden figures on tall bases by Heckel: a "Liebespaar" (lovers) and a figure presumably dressed in a long skirt. One can conclude from preserved photographs and sketches of Heckel's sculptural work, that Heckel preferred to carve his 1909/10 figures on small pedestals, while Kirchner only suggested pedestals or did entirely without them. On the very right we see another small pewter figure by Kirchner. According to Wolfgang Henze, Kirchner's sculptural work commenced in 1909 with works in clay, tiles with erotic motifs, and it was not until 1910 that the first wooden sculptures were created. Heckel is thus the first of the group to engage in sculptural works. It was not until 1912 that wooden sculptures were mentioned in the catalog and included in the joint "Brücke" exhibition at Fritz Gurlitt's in Berlin; Heckel had five sculptures in wood, Kirchner six. Historical illustrations have not been preserved.

According to Andreas Hüneke, Heckel confirmed that he made first wooden sculptures at the end of 1906. "After announcing a photograph made by Kirchner in a letter to Ada Nolde on November 23, he sent it to her on January 27, 1907, writing: '4 wooden figures by E. Heckel. The first and third in birch wood, second and fourth in basswood, perhaps you will save the sheet in memory of my first sculpture.'" (Quoted from: Andreas Hüneke, Die Skulpturen aus Holz, in: Erich Heckel, Werkverzeichnis der Gemälde, Wandbilder und Skulpturen, Munich 2018, p. 370) "Both this documentary impetus and the positioning of the sculptures on pedestals, indicate a special appreciation. As far as this photograph, as well as a second one with the same figures in a different arrangement in possession of the Kirchner Museum in Davos, show, in these first works Heckel ‘peeled’ the figures out of the trunk with the arms close to the body and with very little excess material," Hüneke continues ibidem.

Even after Heckel's return from World War I, he continued to make wooden sculptures in Osterholz. However, from an unknown amount of works, only this "Stehende" has survived; which makes it so special and precious. With a slightly elongated body, the artist peeled this elegant appearance out of the trunk in a pensive and at the same time confident posture. Her face, the chin supported by her right hand, is framed by a short hairstyle typical of the 1920s, her eyes are closed, her nose strong and the lips bulged. In earlier sculptures, Heckel used little paint, for instance only to emphasize the hairdo in black – cf. “Hockende“ from 1912 (fig.) or Ernst Ludwig Kirchner usage of black to heighten the intensity of the "Hockende" from 1910, the artist does entirely without any shading that he cannot achieve by sculptural means: this explains the expressive face, the arms’ position, and not least the pose of the legs, with which Heckel adds this self-assured posture to the approximately 80-centimeter-long body.

Some of the sculptural works, such as the "Stehende" from 1920, are depicted in Heckel's paintings and drawings, for example in the watercolor "Stilleben mit Holzplastik" from 1946 (fig.). In some cases this reference is the only proof that these works used to exist at all, as many fell prey to World War II. After the fire in his Berlin studio, Heckel recorded a loss of eight sculptures, which had been in his possession in addition to the works he was able to save. (Andreas Hüneke, p. 379) Andreas Hüneke suspects that the total number of wooden sculptures created by Heckel was considerably larger than anything that could be proven with the help of his paintings, watercolors and drawings. "In addition to the sculptures, we have to consider all the objects of daily use: carved, partly figurative stools, as they appear in, among others, various paintings, where they are shown next to the sculptures or serve as their pedestals." (Andreas Hüneke, p. 379) [MvL]
More Information
+
Sell
Get a free appraisal for a similar object!
+
Register for
Erich Heckel
+
Buying from A-Z
+
Contact a specialist
+
Erich Heckel Biography
Share