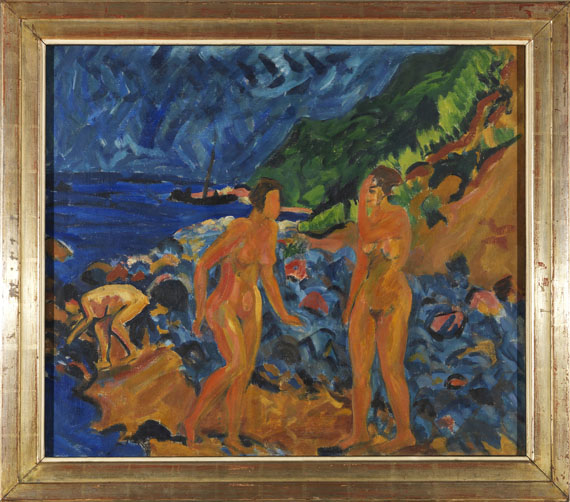 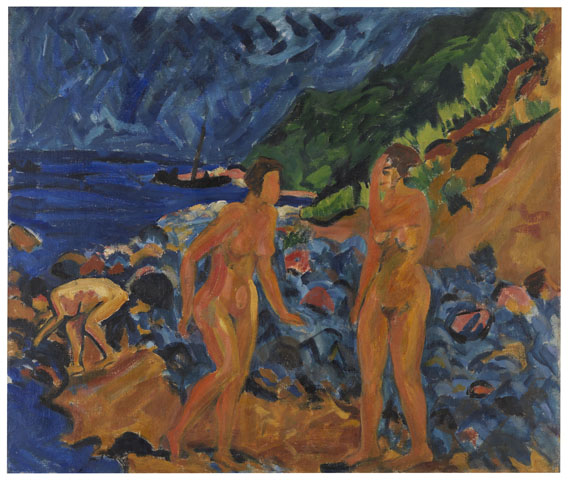 • Erich Heckel rendered one of the group's key themes in the strong characteristic Brücke colors: the unity of man and nature.
• Heckel spent June 1912 on the island of Hiddensee, where he made only a few paintings.
• Paintings of bathers from the creative period before WW I are extremely rare on the international auction market.
• A year after this work was made. it was presented at the renowned Galerie Goltz in Munich.
• A scene with bathers (Badende am Waldteich, 1910) fetched Erich Heckel's to date highest price on the international art market (Quelle: artprice.com).

The first half of 1912 was marked by many changes in the life of Erich Heckel. In April the gallery Fritz Gurlitt showed the first exhibition of the artist group in Berlin, in May he went to Cologne with Ernst Ludwig Kirchner to paint the chapel at the "Internationale Kunstausstellung des Sonderbundes westdeutscher Kunstfreunde und Künstler". Opening on May 25, it showed motifs from the Old and New Testament. This exhibition is considered the first one that basically summed up Modern European Art since 1880. According to the catalog raisonné of the paintings (Andreas Hüneke, Munich 2016, pp. 178ff.), Heckel and his partner Sidi Riha spent the month of June on the island of Hiddensee before they accepted Kirchner's invitation and visited him on the island of Fehmarn in July. There Heckel met the siblings Erna and Gerda Schilling, as well as the two MUIM students Hans Gewecke and Werner Gothein.

The Heckels visited the long, narrow island west of Rügen for the first time and stayed at "Hiddensoe's Restaurant und Logierhaus" in Grieben. The artist found his motifs in the highlands and cliffs characteristic of the northern part of the island. After his stays with Karl Schmidt-Rottluff in the flat Oldenburg land around Dangast during the summer months of the years 1907 to 1910, and the summer of 1911 at the Moritzburg Ponds with Kirchner, Pechstein and Mueller, this steep cliff is a rather rough background for the three bathing women. With this painting, Heckel made the multifacetedness of a coastal landscape characterized by coarse, boulder-like stones with isolated patches of sand and a steep coast covered with trees and shrubs a magnificent backdrop. At the very front of the 'stage', one nude, probably just coming out of the water, moves towards a standing figure, while a third nude bends forward as if she had discovered something in the shallow water. In the back we see the a sailboat at anchor in the Baltic Sea under a sky of swirling clouds. Heckel's palette is determined by strong colors that this coastal landscape shows in certain lights conditions, a mixed bright and muted blue applied with a broad brush in contrast to the hues of green of the dishevelled pine trees and the ocher sand, its nuances taking on those of the women that have been reddened by the sun. Who are the women that Heckel watches bathing? The artist only suggests a face on the nude in right, and could thus refer to Siddi, his partner, while leaving the other two women anonymous; are they fellow travelers from Berlin or acquaintances they met on the island?

With the relocation to the metropolis Berlin in the fall of 1911, Heckel's painting style, like that of his fellow painters, changed drastically under the impact of the new surroundings. The confrontation with contemporary art forms such as Cubism and Futurism, whose representatives were shown at Herwarth Walden's gallery "Sturm" in Berlin in April 1912 and a little later at the International Sonderbund Exhibition in Cologne, may also have had its share in the development of Heckel's paintings and drawings. Nature and the image of man underwent a fundamental change in 1912, not least through his acquaintance with Lyonel Feininger and Franz Marc. Marc, who wanted to win Heckel and the other members of the "Brücke" for the second exhibition of the "Blauer Reiter", reported to Kandinsky about Heckel from Berlin on January 10, 1912: "to me it seems as if meaning is to be found somewhere in the very back of his pictures [..]". And on January 18, Marc wrote to Kandinsky again: "Heckel's art is very oblique, with a pious, deep sense that is more like a subtle echo, or rather the counter-sound to what one initially feels; he scares you off, and catches you later." (Wassily Kandinsky Franz Marc. Briefwechsel, ed. by Klaus Lankheit, Munich 1983, pp. 110, 122) Unlike Kirchner, whose famous street scenes were inspired by the hustle and bustle of the big city, the new environment found its way into Heckel's works to a much lesser extent. There may be depictions of everyday life in the city, but he basically concentrated on what had always fascinated him and which he also emphasized in the present painting "Figuren am Strand": man and landscape, the direct impression of a carefree coexistence in harmony with nature, an expression of his longing for originality and unity with nature. Heckel put emphasis on peoples’ emotions and desires: the isolation of the individual. [MvL]
More Information
+
Sell
Get a free appraisal for a similar object!
+
Register for
Erich Heckel
+
Buying from A-Z
+
Contact a specialist
+
Erich Heckel Biography
Share