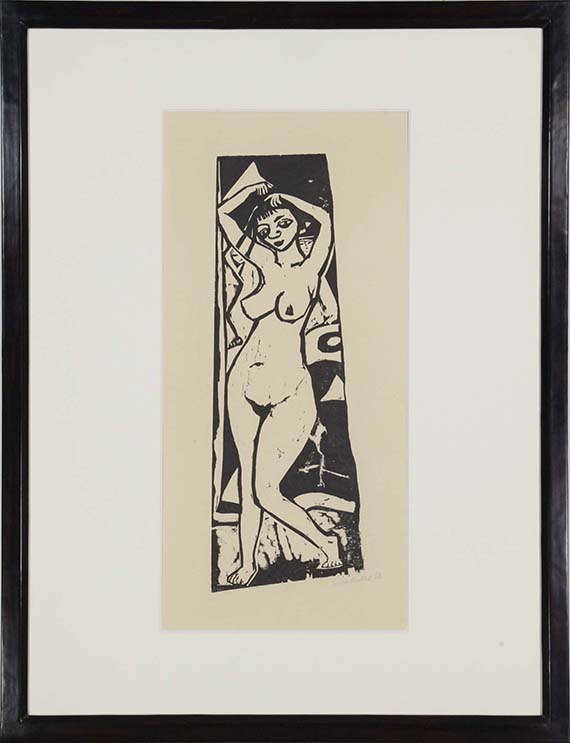 We are grateful to Mrs Renate Ebner and Mr Hans Geissler, Erich Heckel Estate, Hemmenhofen on Lake Constance, for the kind support in cataloging this lot.

PROVENANCE: Artist's estate (1970-1989).
Collection Hermann Gerlinger, Würzburg (with the collector stamp, acquired from the above in 1989).

The theme of the female nude in the studio and outdoors was the focus of the artist group "Brücke". In the work of Erich Heckel, the woodcut "Stehende" from 1912 is one of the highlights of this subject and one of the most important prints from this period. In contrast to other depictions of nudes, in which figures are casually captured in rapid movement and unconventional poses, Heckel shows the full-length nude in an elegant, almost graceful pose and in the classic contrapposto position. Heckel's view of the figure incorporates the influences of the old German masters: he and his "Brücke" colleagues have particular admiration for Dürer, Grünewald and Cranach. Heckel was very impressed by the latter, as a comparison with his "Venus" shows - a painting that was highly valued by the "Brücke" artists at the time. Even years later, Heckel confessed: "These old masters sort of gave their approval and provided evidence of the own way of working [..]." (Quoted from: Letter dated May 18, 1953 to Emmy Mueller, Otto Mueller's widow. Copy in the Erich Heckel estate, Hemmenhofen.)

The dance posture suggests Heckel's partner Siddi, a dancer whom he met in 1910 and who would be his preferred model from then on. In the background on the right, the face of a male observer can be seen above the shoulders. Thus the allurement of the figure unfolds between two viewing levels. The motif is fitted into the irregular, slender woodblock tapering towards the top, increasing the gracefulness and sensual magic of the young woman.