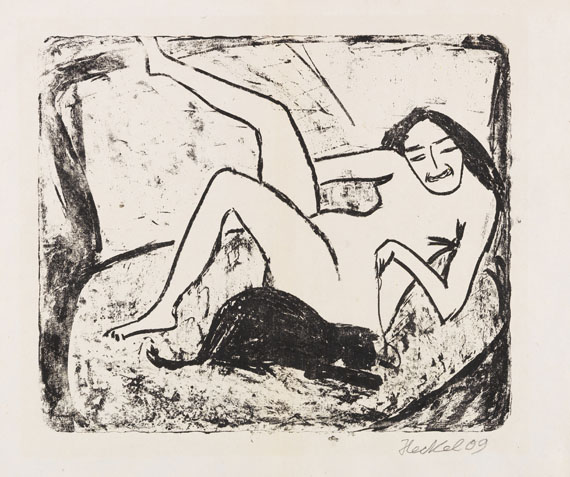 • This is the only copy not in museum ownership. The other two known copies of the lithograph are in the Folkwang Museum, Essen, and the Staatliche Kunsthalle, Karlsruhe.
• An extraordinarily fine example of the immediate and spontaneous manner of the "Brücke" artists.
• Consistent provenance.

We are grateful to Mrs Renate Ebner and Mr Hans Geissler, Erich Heckel Estate, Hemmenhofen on Lake Constance, for the kind support in cataloging this lot.

PROVENANCE: Artist's estate (1970-1997).
Collection Hermann Gerlinger, Würzburg (with the collector stamp, acquired from the above in 1997).

There can hardly be any doubt that the medium of prints is one of the central means of artistic expression the members of the "Brücke" made use of in a special way. First and foremost in this context is the woodcut technique, in which the artists developed completely new design principles based on the centuries-old and changing tradition of the printmaking process. Significantly more so than artists before them, they made use of the respective material and its properties when experimenting with the various printing blocks and plates and made the process visible in the final prints. This also applies to the lithography technique, which Heckel used for the first time in 1907 and subsequently took advantage of its outstanding versatility. Together with Ernst Ludwig Kirchner, he developed "turpentine etching" as an extension of the process, which made it possible to make hand prints from the finished lithographic stones. Pulling off the printing plates by hand is of particular importance for the artists of the "Brücke" - they only regard these graphic works as "original graphics". The sheet offered here gives us an impression of Heckel's remarkable handling of the medium of lithography. Through the almost pure use of the rough outline for the design of the female figure, he skillfully sets it apart from the black cat. The hard contrast between black and white elements becomes one of the main means of expression. The person portrayed, whom Heckel shows here in a subtle yet highly expressive way, probably is Lina Franziska Fehrmann, known as “Fränzi”. In the period around 1910, she was also often used as a model by the other members of the “Brücke”, but it was Heckel and Kirchner in particular who made her the subject of numerous works in various artistic media and gave her an iconic status. Heckel created the extraordinarily spontaneous effect of this lithograph with particular skill. Supported by the close relationship between this printmaking technique and drawing, the artist allows lines and graphic structures to come to light, particularly in the two-dimensional areas such as “Fränzi's” hair or the cat's fur. With a clear intention, the artists of the "Brücke" usually implemented their motifs directly on the print medium without using a preliminary drawing. The aim was to achieve the most direct and spontaneous expression of the presentation. [AM]
More Information
+
Sell
Get a free appraisal for a similar object!
+
Register for
Erich Heckel
+
Buying from A-Z
+
Contact a specialist
+
Erich Heckel Biography
Share