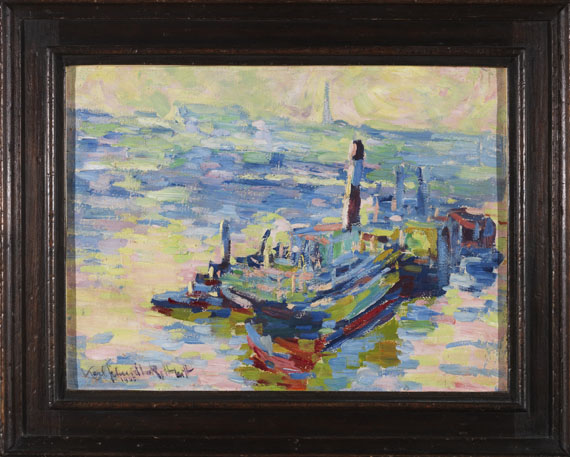 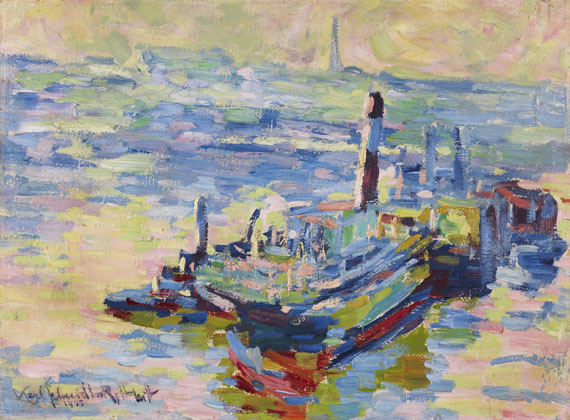 The work is documented in the archive of the Karl and Emy Schmidt-Rottluff Foundation, Berlin.

What an impressive work that marks Schmidt-Rottluff’s profound reorientation in 1905. In many respects, this resembles a break with the previous landscape watercolors he had created before taking up his brief architecture studies at the Technical University in Dresden, which lasted only one semester, and allowed him to become a protagonist of radical modernism in the circle of friends who formed the artist group "Brücke".

From the beginning, Karl Schmidt-Rottluff was devoted to the landscape. Landscapes are one of the central pictorial themes in his work. They document his travels, from his beginnings as a student in the rural Saxon region around his hometown Rottluff to the last works created in Berlin. The first works, still signed "Karl Schmidt", were created around 1901/1902 and show the surroundings of his birthplace Rottluff: meadows, forests, fields, rivers, farmsteads, single houses and small villages on the fringes of the Ore Mountains. Typical of the artist's landscape watercolors is a tendency to less spectacular subjects, unusual perspectives and extreme close-ups. (fig.)

In Chemnitz, Schmidt-Rottluff attended the ‘Königliches Gymnasium’ from 1897 to 1905, a school with an emphasis on arts and humanities. Schmidt-Rottluff met the around one and a half year older Erich Heckel in the "Vulcan" debating club where senior students read and discussed contemporary literature. Common interests would soon lead to a lifelong friendship. They repeatedly visited the "Kunsthütte", a local art association, which organized lectures and exhibitions, for example of Eugen Bracht, Paul Baum or Gotthard Kuehl, German representatives of Naturalism, Impressionism and Pointillism. Early works of his friend Erich Heckel have a certain similarity, as, for example, the painting "Brandstätten" from 1904 (fig.) shows. Heckel's 1905 painting "Elbe bei Dresden" (fig.) also anticipates a painting technique that may have inspired Schmidt-Rottluff to "Morgen an der Elbe" (Morning on the river Elbe).

In Dresden the young student found himself confronted with an art scene that would also influence his style: an expressive color palette, applied with broad and brushstrokes. The color effects attained by placing light reflections and by suggesting seasons and times of the day through the use of pure, bright colors characterizes the painting "Mogen an der Elbe". In the painting "Erzgebirgsdorf" (fig.), also painted in 1905, Schmidt-Rottluff began to stage color in the foreground to bring mood and emotionality into the picture. Schmidt-Rottluff detached himself from the objective representation of the natural model and allowed his landscapes to emerge from colors and forms, as he had seen in works by van Gogh, and, confirmed by the exhibition at Galerie Arnold in Dresden in November 1905, made direct use of them for his painting. "Morgen an der Elbe" appears like a colorful mixture of both short and longer strokes that merge to form the radiant motif of ships floating on the Elbe. Color and brushstroke gain a value of their own, through the open pictorial structure, they indirectly refer to the depicted reality. External reality meets internal sensation, "immediate and unadulterated". Schmidt-Rottluff's handling of form and color appears free and loose; his painting is strong and impulsive. Without black contours, the colors contrast with each other and attain their intense presence, thus the view is concentrated on the ships in the morning sun. [MvL]
More Information
+
Sell
Get a free appraisal for a similar object!
+
Register for
Karl Schmidt-Rottluff
+
Buying from A-Z
+
Contact a specialist
+
Karl Schmidt-Rottluff Biography
Share