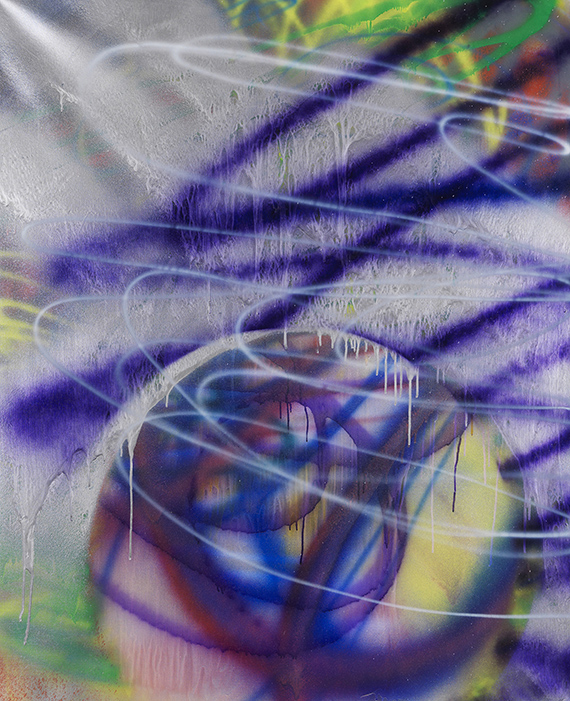 • The year this work was made the artist was represented in, among others, the exhibition "Wunderkammer. A Century of Curiosities" at the Museum of Modern Art in New York.
• Similar works from the 2000s are in possession of, among others, the Centre Pompidou, Paris, the Museum Kunstpalast, Düsseldorf, and the Städtische Galerie im Lenbachhaus, Munich.
• In the last two years the artist raised attention with large-scale solo shows at, among others, the HAM Helsinki Art Museum and the Hamburger Bahnhof Museum für Gegenwartskunst in Berlin.

We are grateful to the Studio Katharina Grosse, Berlin, for the kind support in cataloging this lot.

In her often monumental art, the applcation of the paint with a spray gun has been Katharina Grosse's preferred artistic technique since the late 1990s. In contrast to manual work with brush and spatula, the special utensil of the spray gun allows the artist to keep a certain distance from the image carrier, to move more freely and quickly during the creative process and to explore completely new ways of painterly expression. The result are compositions of soft color transitions and gradients, thin superimposed layers of color and drops and streaks of colors, as in the work offered here.

Grosse's paintings are not only created on paper, on canvas and other traditional image carriers, but also on meter-long fabric constructions, objects, floors, heaps of earth, lawns, walls and facades. In this way, she occupies entire rooms and locations, which are transformed into oversized installations through her artistic intervention. With these exuberant areas of color that spread out in all directions and become part of the surrounding architecture, the unusual paint carriers, but especially with her unconventional way of applying the paint, the artist has been questioning the conventional definition of the traditional medium of painting for years. Grosse provides clear shifts of the boundaries within her profession and has thus made an important, progressive contribution to contemporary art since the 1990s. In September 2021, the artist published her first NFT edition with a digital sculpture "Number One" floating freely in space, proving once again that she is still striving to expand the boundaries of the concept of painting.

In the canvas work offered here, too, Katharina Grosse's painting is - quite characteristically - aimed at expansion. The edges of the picture interrupt the course of the fine, elliptical spray forms created in circular movements and varying colors, which - with their clear demarcation - create a contrast to the soft color gradients within the picture. Nevertheless, the composition of overlapping, sprayed color swirls, mists and surfaces seems to spread across the entire canvas, to grow beyond the limits of the image carrier, trying to stimulate viewers to complete the effusive gradients in their mind. [CH]
More Information
+
Sell
Get a free appraisal for a similar object!
+
Register for
Katharina Grosse
+
Buying from A-Z
+
Contact a specialist
+
Katharina Grosse Biography
Share