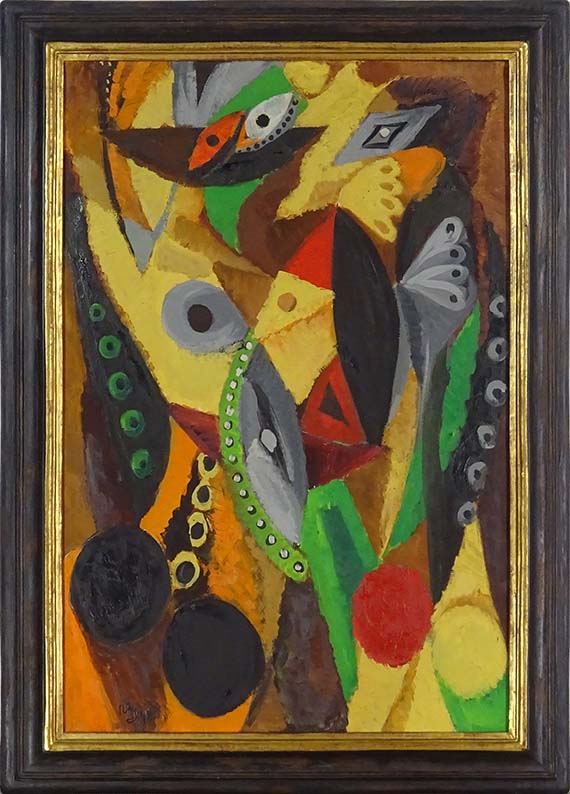 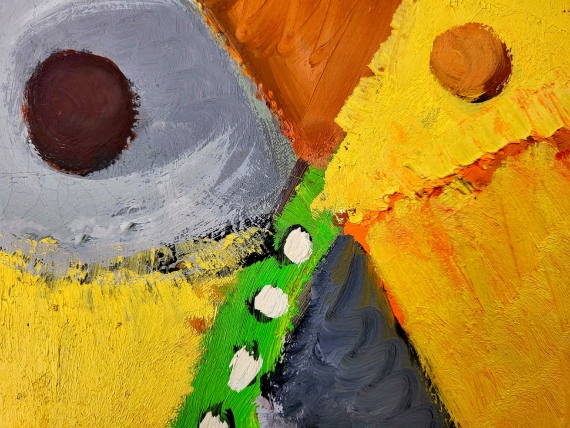 • Splendid work from the peak of the "Hekate" Pictures (1945-1948), which marked Nay's transition from figuration to abstract painting.
• Das Gemälde "Maurische Mädchen" ist erfüllt von den heftigen, brennenden Farben - einer ganz von der Farbe getragenen Bildsprache.
• Nay shows a particularly comprehensive repertoire of forms, that already comprises circles and spindles, which would become characteristic of the later Disc and Eye Pictures.
• A work with an impressive international exhibition history, among them the grand exhibition "German Art of the 20th Century" at the Royal Academy in London.
• Nay showed the similar "Hekate" picture "Gelbe Sitzende" from the same year at the 24th Venice Biennial.
• Comparable "Hekate" paintings are at, among others, the Pinakothek der Moderne, Munich, the Nationalgalerie Berlin, the Sprengel Museum, Hanover, and the Museum Ludwig, Cologne.

"The attempt to analyze the Hekate pictures (1945-48) through their titles would probably be an intervention in his work that the artist would hardly want, since Nay himself veiled the meaning and content of his Hekate pictures with a strange title."
Elisabeth Nay-Scheibler, in: E.W. Nay. Die Hofheim Jahre 1945 bis 1951, Frankfurt a. M. 1994, p. 69.

"His powerful, colorful pictures are considered a bridge between art before and after the Second World War, between expressionism, abstraction and free gestural painting after 1945, between German and international modernism."
Press release from the Hamburger Kunsthalle on the occasion of its current retrospective, quoted from: www.hamburger-kunsthalle.de/ausstellungen/ernst-wilhelm-nay.

After the end of the war, which Ernst Wilhelm Nay spent as cartographer in France, he did not return to Berlin but to the idyllic town of Hofheim am Taunus. Through the mediation of the artist and gallery owner Hanna Bekker vom Rath, he moved into the abandoned studio of Ottilie Roederstein, a German-Swiss painter who died in Hofheim in 1937. Nay's paintings, which he created during the six years he stayed there, are filled with intense, burning colors. A pictorial language based entirely on color, which initially remained committed to figuration, culminated in 1945-1948 in the so-called Hekate pictures. In 1948, Ernst Gosebruch, the director of the Museum Folkwang in Essen, who was dismissed in 1937, spontaneously named this work phase after the painting "Tochter der Hekate I". The starting point of the Hekate phase are images dominated by a figure or a pair of figures, whereby Nay was definitely inspired by Picasso's cubist-influenced human type of the 1930s and early 1940s. In a letter to his friend and collector Erich Meyer from December 28, 1945 , he describes the aim of his artistic work as activating the pictorial space through color: "My pictures are strongly colored and multicolored and painted in a very free manner. I am just about to take a leap forward again. Colorful dynamics, surface rhythm, ornament and relief, these have been my means up to now to design the space of painting. So far I have been extremely cautious about refraining from them - as is also the spirit of my art, which magical, enchanting now more emphasized than before, - to represent spatial depths with these means. That must happen now." (quoted from: E. W. Nay 1902-1968. Pictures and Documents, Munich 1980, p. 90)

It is done with a sophisticated expansion of the palette. Color mixtures that have never been used before appear. The surface and depth of the coloring open up a rich, highly differentiated spectrum for the pictures. The application of paint, here and there slightly impasto, reinforces a peculiarly valuable relief effect, as if it were a question of extremely strange structures. "If we review the main works of this year 1948, it is not difficult to identify preliminary stages, parallels, which are grouped around the 'tableau manifesto' and even surpass it in terms of painting. The Moorish girls in a brilliance of brown, gold ocher and yellow and the costliness of their decor still maintain the connection to the radiant series of pictures of the late Hekate period. But the pictorial mechanism has become clearer, the spatial figure is more planar and precise, the form is larger and calmer. The sharpness of the 'shepherd' quietly begins in the formal ' to announce", says Werner Haftmann about his friend's work (quoted from: E. W. Nay, Cologne 1960, p. 134).

The painting "Moorish Girls" is a picture painted entirely out of the color. A fan-shaped hand, open eyes pointing to a face, and two rounded shapes in the mid center, which evoke the back view of a figure, are revealed to the viewer who is familiar with Nay’s formal vocabulary. A vocabulary that already includes the circular and spindle forms that are so characteristic of Nay's later disc and eye images. [MvL]
More Information
+
Sell
Get a free appraisal for a similar object!
+
Register for
Ernst Wilhelm Nay
+
Buying from A-Z
+
Contact a specialist
+
Ernst Wilhelm Nay Biography
Share