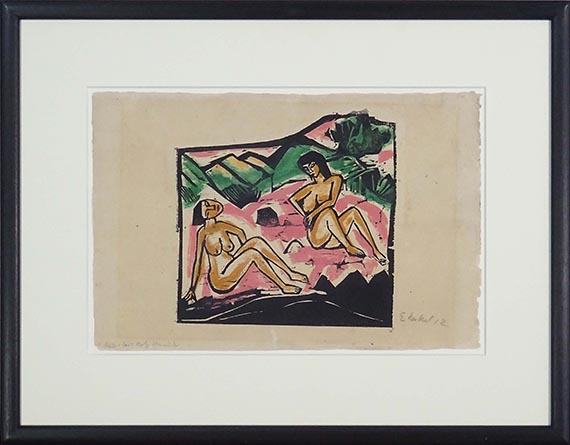 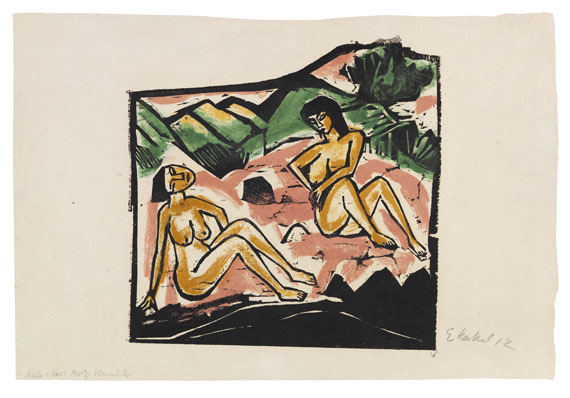 477
Erich Heckel
Zwei sitzende Frauen, 1912.
Woodcut in colors
Estimate:
€ 60,000 / $ 55,200
Sold:
€ 150,000 / $ 138,000
(incl. surcharge)
Zwei sitzende Frauen. 1912.
Woodcut in colors.
Ebner/Gabelmann 527 H. Dube H 240. Signed, dated and inscribed "2 Akte farb Holz Handdr" by hand. On laid paper. 29.5 x 29.6 cm (11.6 x 11.6 in). Sheet: 34,7 x 52 cm (13,6 x 20,4 in).
According to Renate Ebner and Hans Geissler, this is a beach scene on the Baltic island of Fehmarn, where Erich and Sidi Heckel visited Ernst Ludwig Kirchner and his girlfriend Erna in July 1912. [AR].
• Extremely rare hand-made print from the "Brücke" days in very fine colors.
• The vital pictorial language shows Heckel at the peak of his woodcut art.
• Owing to the individual coloring, each work is of unique character.
• Of the six known copies four are in possession of public collections: Museum Folkwang, Essen, Brücke Museum Berlin, Staatsgalerie Stuttgart and Chicago Art Institute.
• To date only one other copy was offered on the international acution market (source: artprice.com).

We are grateful to Ms Renate Ebner and Mr Hans Geissler, Erich Heckel Estate, Hemmenhofen on Lake Constance, for the kind support in cataloging this lot.

In addition to painting, printmaking - especially the woodcut - became a key medium for Erich Heckel's expression. The motif of the female nude in the studio or in the open air was at the heart of the artist group "Brücke". Heckel and his fellow artists saw their idea of a connection of man and nature in the subject of the bathers in an untouched landscape by the water. In Heckel's oeuvre, the color woodcut "Zwei sitzende Frauen" ("Two Seated Women") from 1912 is a highlight of this theme and one of the most important prints from this period.
The artist captured an idyllic bathing scene on the beach. Two seated women are lolling in the sun. The motif presumably shows the beach on the Baltic island of Fehmarn, where Erich Heckel and his partner Siddi (Milda Frieda Georgi) visited Ernst Ludwig Kirchner and his girlfriend Erna Schilling in July 1912, following their stay on the island of Hiddensee. The localization is also supported by the beach with the boulders and the slight cliff in the background, as it is particularly typical of the rough coast near the Staberhuk beacon on Fehmarn, where Kirchner was staying (fig. 1). Through his powerful pictorial language, Heckel proves to be at the height of his woodcut art. The print medium, predestined for a radical simplification of form with reduced surfaces, animated the high-contrast stylization of the depiction to generous surface zones and angular, broken contour ridges. The two sensually rounded female bodies stand out charmingly against the rugged landscape. Above all, in addition to the exciting form, the sheet gains its vital expressiveness and atmosphere from the intense color contrasts.
With this beach scene on the Baltic Sea, imbued with a summery joie de vivre, Heckel succeeded in creating a magnificent color woodcut. In terms of printing technique, he used a black drawing block and colored ink plates in bright yellow, green, and pink, with the intensity and density of the colors varying from print to print between red and pink, light and dark green, and yellow and ocher. At this time Heckel produced his woodcuts exclusively as hand prints, each of which differed in the printed image. Thus, each print is a unique piece. Only six copies of this very rare print are known to date, including four in German and American museums. Typical for Heckel's woodcuts of the years 1912/13 is the use of irregularly shaped printing blocks, their oblique, tapering or widening outline contours play a role in the composition and make for the the works’ special, almost primal character (fig. 2). With a sure sense for the effectiveness of the uneven edges, Heckel inserted the sensual subject into the unusual outline, thus adding a rhythmic and archaic quality to the picture's expression.
Andreas Gabelmann
More Information
+
Sell
Get a free appraisal for a similar object!
+
Register for
Erich Heckel
+
Buying from A-Z
+
Contact a specialist
+
Erich Heckel Biography
Share