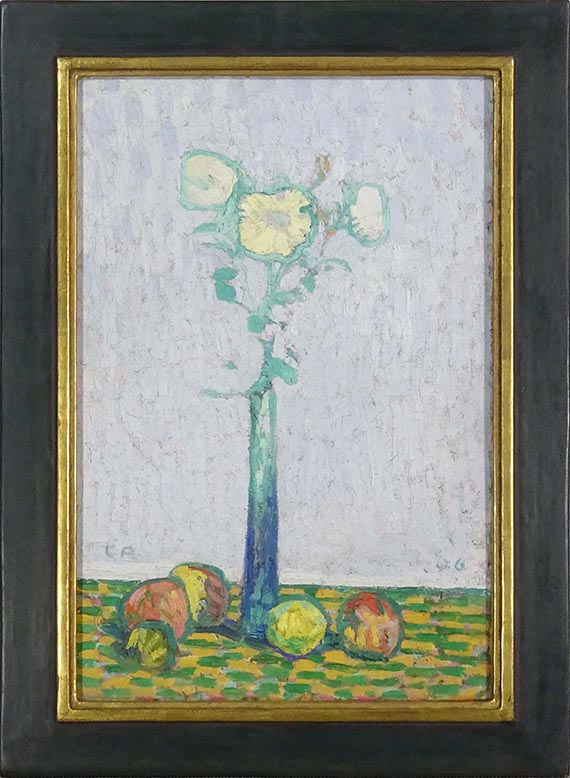 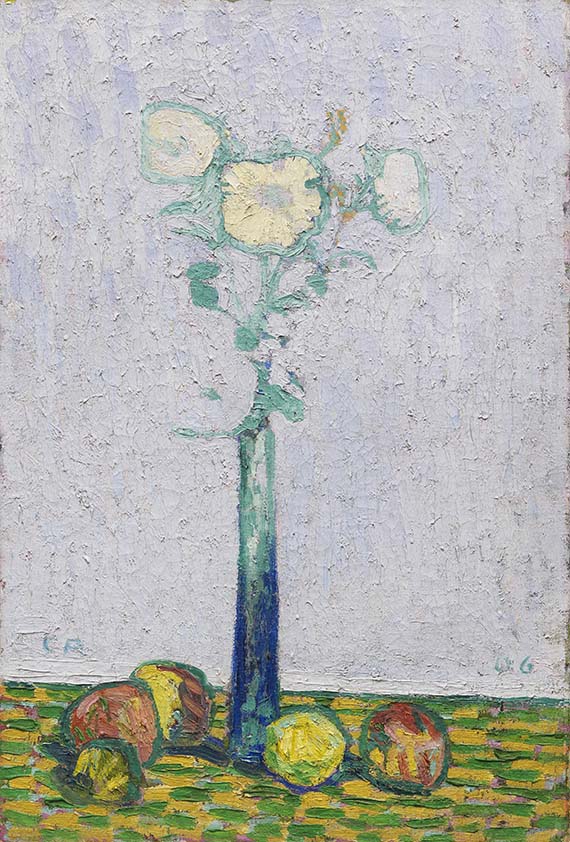 • In 1906, the year the present work was made, Cuno Amiet became an active "Brücke" member.
• Strong still life characterized by an airy fleetingness and grounded weight.
• From the acclaimed collection of Oscar Miller, an important collector of Swiss art.
• Cuno Amiet is one of the most important Swiss modern artists.
• This present work is one of the few paintings from this period that have been preserved – a fire in the Munich 'Glaspalast' in 1931 destroyed a better part of his oeuvre.

PROVENANCE: Collection Oscar Miller and Else Miller-Sieber, Biberist (March 1917- September 1919).
Gustav and Corry Sieber, Küsnacht (obtained as farewell gift on September 10, 1919 from the above, with hand-written dedication on the reverse, presumably family-owned until 1981).
Private collection Basel (since 1981: Galerie Kornfeld, Bern).
Galerie Schloss Greifenstein, Staad near Rorschach.
Collection Hermann Gerlinger, Würzburg (with the collector's stamp Lugt 6032, acquired from the above in 1988).

"With his large color fields Amiet was far ahead of us."
Schmidt-Rottluff, 1957

"O. Miller is one of the most passionate collectors of Swiss art, and an intellectual aesthetician on top. […] Accordingly, his collection is particularly impressive because of the fervent splendor of all of his works by Amiet […]. That's why the collection is not only a prime example for Switzerland but also far beyond it.“
Quoted after: Der Kunstwanderer: Zeitschrift für alte und neue Kunst, für Kunstmarkt und Sammelwesen 2.1920/21, p. 366.

Cuno Amiet was already 38 years old when he received a letter from a young artist named Erich Heckel. Amiet had already attained a certain fame as an artist, has international exhibitions and is considered a renowned artist of the avant-garde. He is half a generation older than the members of the "Brücke" and more the type an upper middle-class gentleman living a dignified life in the countryside near Bern. Young Heckel, on the other hand, belonged to the progressive group that wanted to change modern art for good. The young painters from Germany felt that the message in Amiet's works was somehow related to their own work. In September 1906, Erich Heckel invited him to join the group: "We have seen your works with admiration and enthusiasm, and we take the liberty of asking you if you would like to join our group 'Brücke'. Unanimously we have recognized you as one of us and we hope that you will support our cause as an aspiration for the same artistic goals". They became aware of him through an exhibition at Galerie Richter in Dresden in 1905. Cuno Amiet spontaneously accepted the invitation and joined the young artists group. Seeking artistic exchange, he remained a member until the group broke up in 1913. In 1892/93 Amiet had spent a year in the artists' colony Pont-Aven and found decisive impulses in the painting of Gauguin, van Gogh and Seurat. It may have been this experience that also made the "Brücke" so interesting.

In 1906 Cuno Amiet took part in the first first exhibition at Dresden lamp factory Seifert, showing three paintings and woodcuts. In addition to his artistic contributions, Amiet also became active in marketing the artist group. He recruited numerous passive members in Switzerland, including Oscar Miller, the first owner of "Stilleben mit Äpfeln". Oscar Miller was an important promoter of Swiss art, but also advocated the art of the "Brücke" in press releases as early as in 1907. Amiet also tried to help the "Brücke" to international renown by organizing a successful exhibition in Switzerland, while efforts to do the same in Paris failed.

"Stillleben mit Äpfeln" from 1906 impressively illustrates why the German expressionists were so fascinated by Amiet: In 1905 the Swiss artist introduced expressive lines, to which he was inspired by his time in Pont-Aven. These strong lines are concentrated in the lower part of the picture and form an exciting contrast to the light and airy upper part. This contrast is intensified by the play of delicate pastel colors and strong luminous hues. Amiet was one of the first painters in the German-speaking region to separate the color from the depicted objects so that they can unfold their own beauty. Thus he boldly placed turquoise contours around the delicate lemon-yellow blossoms, in order to model the flowers in the vase. Along with Ferdinand Hodler and Alberto Giacometti, Cuno Amiet was one of the most important Swiss artists of the modern era. [SM]
More Information
+
Sell
Get a free appraisal for a similar object!
+
Register for
Cuno Amiet
+
Buying from A-Z
+
Contact a specialist
Share