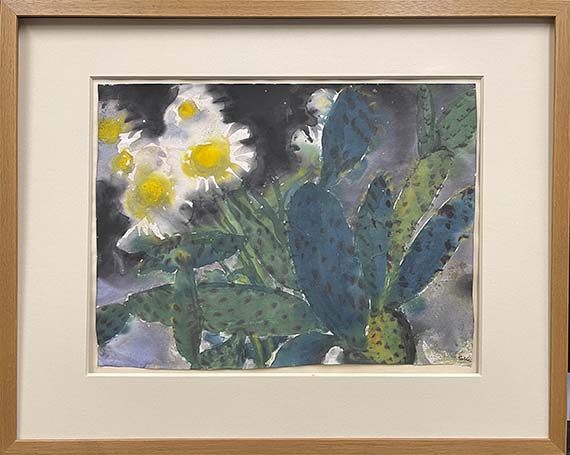 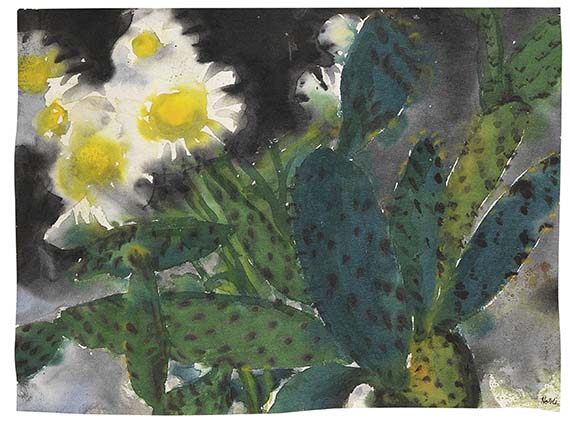 • One of the rare depcitions of cacti in Nolde's vast oeuvre of flower pictures.
• The composition unites Nolde's passion for the exotic and the world of flowers.
• Nolde translates the cacti's surface quality into his own language of color and form.

With a photo expertise from Prof. Dr. Manfred Reuther, former director of the Foundation Seebüll Ada and Emil Nolde, dated October 8, 2007 (in copy).

In Emil Nolde's oeuvre works with intensely luminous floral motifs form a group that is as extensive as it is significant. So far, the related topic of cacti and orchids has remained rather unknown. Nolde's preference for cacti and unusual, non-European plants formed at an early point. He found first impulses on his South Sea voyage to New Guinea with his wife Ada. Back in Germany, the exotic plants kept fascinating Nolde. In the 1920s he created a series of cacti pictures influenced by the fashion of the time. Later he also had cacti in his home and studio in Seebüll. Through the artistic examination of tropical plants and cacti and their up-to-dateness at the beginning of the 20th century, cacti also moved into Nolde's residences in Seebüll and Berlin. Between the living room and dining room in Seebüll was a flower niche in which Ada tended plants. This included various cacti. They added a touch of the exotic to the rather barren Nordic environment and inspired Nolde's art. During the winter months, the artist couple mostly stayed in Berlin. Nolde regularly visited the city's zoological garden, aquarium and botanical garden, which led to large watercolors of exotic animals and plants, in which the painter had completely fallen to the charm of the foreign and exotic. These excursions were a substitute for the long journeys that Nolde had planned but was not able to realize. Later Nolde turned to tropical flowers and plants. Paintings, watercolors and drawings present botanical rarities such as Proteaceae or Heliconia. Nolde removed the plants from their landscape context and combined the cacti, which were quite new in Germany at that time, with chrysanthemum that originally came from Asia, but had made it to Europe since the 17th century. Due to the motif of the cacti, our sheet occupies a special position within the group of flower watercolors. It impresses with the special radiance of the chrysanthemum, whose white petals literally shine against the dark background and form an attractive contrast to the dark green of the cacti. For this effect, Nolde does not simply use an opaque white, but lets the paper itself shine brightly between the different colored areas. The composition lives on the contrast between the cactus flowers and leaves - light, filigree forms stand against dark, block-like areas. The pure colors, the irregularities and flowing transitions, spots and gradients, in general the inclusion of controlled chance in the watercolor correspond to the peculiarity of the plant motifs. In the visual translation they correspond to the nature and appearance of the flowers, blossoms and leaves. In this composition, Nolde's passion for the exotic and the enthusiasm for the world of flowers, which offered him so diverse possibilities of expression, are combined. [SM]
More Information
+
Sell
Get a free appraisal for a similar object!
+
Register for
Emil Nolde
+
Buying from A-Z
+
Contact a specialist
+
Emil Nolde Biography
Share