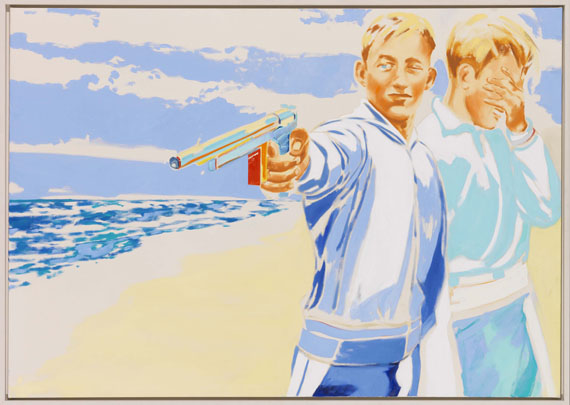 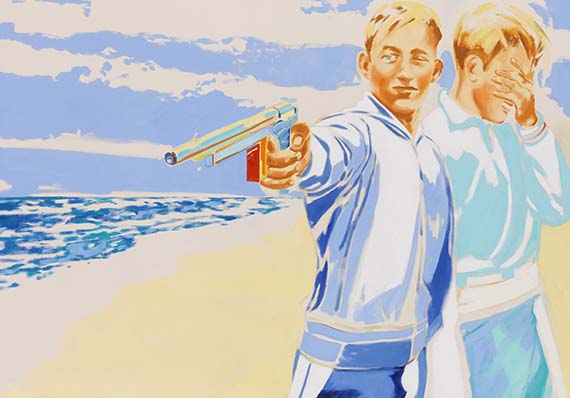 PROVENANCE: Galerie Terminus, Munich.
Private collection Bavaria (acuired from the above in 2002).

"I have the feeling that I grew up in a cult that's suddenly befallen by the outside world, where reality and a big mess happens and it becomes obvious that most of what is preached here is bullshit.“
Norbert Bisky in an interview with BILD on November 6, 2019

The pictorial worlds of Norbert Bisky‘s early works are primarily determined by the tension between an harmonious, calm painting and the sinister, often violent subjects. Pastel tones convey an alleged sense of well-being even in extremely brutal scenes. The images are played by idealized, athletic, agile young people left alone in a vast, wild and beautiful nature. The idealized landscapes are disturbed by the paintings‘ protagonists. The two blond teenagers may stand close together, but they are still alone. They aim at the observer who is an intruder into their world, just as they invaded nature.
Bisky creates a scene of a compelling climax. As the painting manner is reminiscent of film posters, the artist implies even more. We start to picture the events that led up to this scene, and what will happen next. Inevitably, the continuation of the story of the two blond boys in tracksuits is set in motion, thus the images develop their own narrative of a lost innocence, which we can‘t get out of our mind.
Norbert Bisky's beautiful worlds are reminiscent of a mixture of David Hockney, Edward Hopper or Georgia O'Keeffe. The distant calm is reversed and creates a smooth surface underneath which it simmers. [EH]
More Information
+
Sell
Get a free appraisal for a similar object!
+
Register for
Norbert Bisky
+
Buying from A-Z
+
Contact a specialist
+
Norbert Bisky Biography
Share