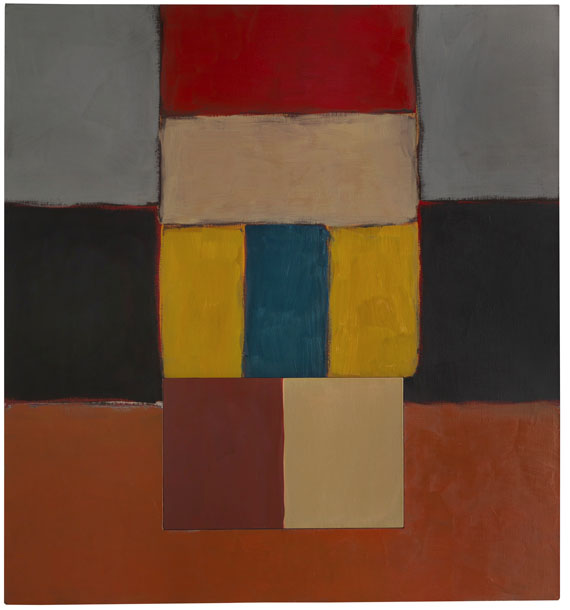 • The artist has used "Insets", small canvas windows inserted into the canvas, since the 1970s, they are considered a special stylistic device within his oeuvre.
• The surface's matte-glossy materiality, the painterly brushwork, the warm colors and the color fields' liveliness make this painting a work with a sensual, almost sculptural effect.
• Other 'Inset' paintigs by Scully are in internationally renowned collections like the Museum of Modern Art, the London Tate Gallery, the Museo Reina Sofía in Madrid and the Albertina in Vienna.

Accompanied by a written confirmation from the Studio Sean Scully. The work is registered with the archive number "SSp04 137".

Since his early days as a painter, Scully's works consist of multi-color stripe compositions, running vertically and horizontally, in different widths and lengths, as well as rectangular color fields with which Scully fills the surface and divides it into rectangles. The artist describes the strong visual impressions on a trip to Morocco in 1969 as a key moment. "Then I saw the striped fabrics that the Moroccans dye and make them into galabeyas - their robes. I saw those stripes everywhere in Morocco and when I got back to work I was making grids from stripes of color. " (Sean Scully, quoted from: www.seanscullystudio.com) The garments typical of the Maghreb states and also the intense, rich colors predominant there, sparked a great fascination in Scully, which has shaped his art to this day and which the artist ultimately transferred into a very own, unmistakable aesthetic. Although Scully was certainly inspired by the works of his artistic precursors like Mark Rothko or Barnett Newman, and the geometrical structures of Piet Mondrian during his studies in London and later in New York where he had moved to in 1975, he developed a very individual visual language in his early creative years. While the earlier works are still kept in a certain minimalism, a regularity and evenness with more clearly delimited color areas and much narrower color stripes, Scully found a more emotional form of abstract painting in the following years, one where light, the colors‘ materiality and the haptics of the surface texture would play a bigger role. Geometry and forms became softer, spaces between the color bars and stripes more imperfect.
Crosswise, lengthwise, broad, narrow. Scully's obsession for the structured pictorial surface

In a first work step he structures the picture, making an exact division of the surface, because the essential principle of his works lies in the order and arrangement of the color fields. Scully chooses from an almost infinite wealth of compositional possibilities and first divides the rectangular shape of the pictorial surface into several smaller rectangular elements or stripes. The individual areas are then filled with several layers of paint by means of a broad brush. The rigidity of the initially strictly orthogonal or parallel structure is broken up by several, subsequently applied layers of paint. The colors spilling over the lines, the color layers that shine through here and there, create a strangely vibrant liveliness owing to their own imperfection. This multitude of rich, strong and at the same time finely nuanced layers of color in interaction with their special materiality of the subtly shiny surface and the particularly painterly, almost impasto brushstroke, which makes the artist‘s handicraft visible, also gives our painting opulent, almost intimate sensuality.

In an almost obsessive preoccupation with geometric structures and arrangements of rectangular shapes, the artist still finds new ideas and inspiring visual impressions in his everyday environment, which he then processes in his works: for example the orthogonal streets of Manhattan, the horizon line between sky, sea and Earth, the millennia-old layered stone walls on the Irish Aran Islands or the nested door and window constructions on wooden houses and facades, which the artist immortalized in impressive photographic works such as his travel photographs from Santo Domingo. The façades of the houses, composed of numerous elongated wooden beams and stripes, must have fascinated Scully not only as a tourist, but especially as an artist, because in a more architectural sense they exactly embody what is omnipresent in his art: the structure of a flat surface, the composition of individual geometric shapes creating a harmonious whole.
But parallels to the artist's oeuvre can not only be found on a visual level, but also in the actual, handcrafted structure of his often large-format works - as it is the case with the painting offered here. Since the 1970s, his oeuvre included works composed of individual image carriers, which also include the so-called insets: smaller, painted canvases that the artist inserts into the canvas, thus creating a delightful interruption, a bemusement and a loss of the previously unexcited visual balance. For this purpose Scully cuts a part of the canvas and fills the resulting 'window' with a canvas that diverges in color and structure, an "inset". "With such manipulations [.] he [the artist] shows us we not grasp the images visually, but also with our tactile sensation. It is the entire body that functions as the subject of perception [..]." (Armin Zweite, 1993).
The "Insets" are probably the most important accomplishments in his oeuvre, which already covers half a century. They can be found in works from the 1970s or in late works with the first black “insets“ like the five-part series "Dark Windows " from 2020.
With this "Inset" painting with its warm colors inspired by nature – a glowing red, firey orange, stone gray, jet-black, and the title colors mustard yellow and midnight blue in the center - Scully created a monumental work characterized by sensual opulence, lively expressiveness, spatial presence and tremendous emotional quality. It can also be described as a particularly successful work in the artist's oeuvre, owing to the highly characteristic painterly qualities mentioned here.
Today the artist is considered one of the world's most important abstract painters. His work includes paintings, pastels, watercolors and drawings, as well as prints, photographs and sculptures. They can be found in the most renowned international collections like the Museum of Modern Art, the Metropolitan Museum of Art and the Solomon R. Guggenheim Museum in New York, the National Gallery of Art, Washington, DC, London Tate Gallery, the Albertina in Vienna and the Guangdong Museum of Art , Guangzhou. His late success in particular shows that Scully's work has already found its place in European art history of the late 20th and early 21st century, and that it still has lasting influence on the development of contemporary abstraction. In 2013 he became a member of the Royal Academy of Arts, and in 2014/15 Scully was the first Western artist ever honored with a comprehensive, retrospective exhibition in China that was shown in both Shanghai and Beijing. In 2020 and 2021 alone, Scully's work featured in numerous solo exhibitions in a total of nine different countries. The five-part series "Dark Windows" from his latest creative phase was shown at Art Basel Unlimited in September this year. For 2022 the Philadelphia Museum of Art is planning to host the grand exhibition "Sean Scully. The Shape of Ideas" intended to provide an overview of the artist's past 50 creative years. [CH]
More Information
+
Sell
Get a free appraisal for a similar object!
+
Register for
Sean Scully
+
Buying from A-Z
+
Contact a specialist
+
Sean Scully Biography
Share