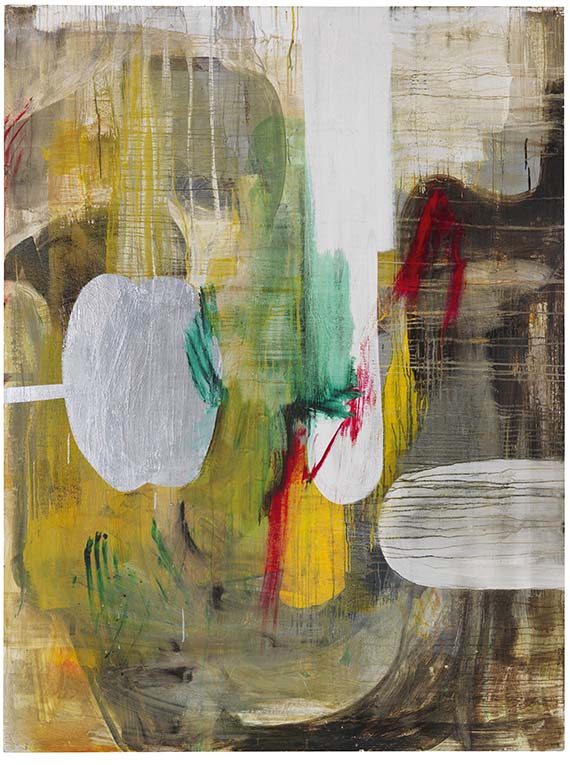 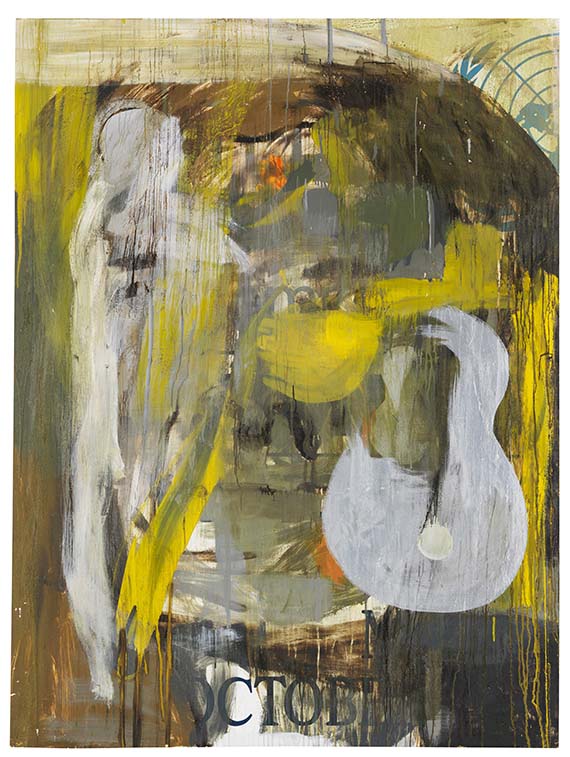 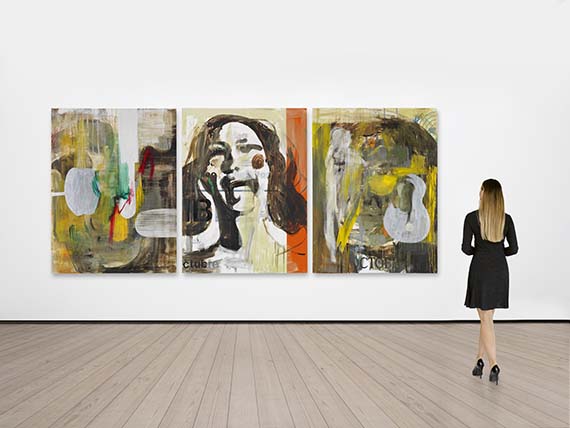 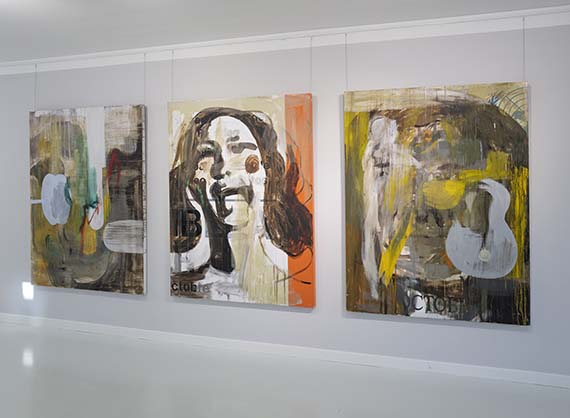 • First monumental tryptich by the artist on the international auction market.
• Important programmatic picture documenting the transition from an enigmatic figuration to a metamorphic abstraction.
• Oehlen uses the "pathos formula" of the triptych as a direct quote from art history to address the relationship between the three motifs through the pictures' arrangement.
• Characteristic Oehlen work from the late 1980s, an idiosyncratic style with a "mucky and washed-out" glaze and a harmonious golden color composition, which would become the artist's signature style.
• On display at the grand European Albert Oehlen retrospective in Lausanne (2004), Salamanca (2005) and Nuremberg (2005).

"For years I tried to gradually approach Pop - in the sense that I was striving for properties such as colorfulness, immediacy and cheerfulness which are commonly attributed to Pop. In context of these approaches, I blew a whole bunch of pictures, which I then destroyed. But eventually I found access. The key was a memory from my youth, that is the time when one was still inexperienced in criticizing the terror of consumerism. "
Albert Oehlen, 2008.

"I wanted emotions! [..] But at some point I was fascinated by these nude pictures by Francis Picabia: someone told me that he simply enjoyed painting these women. I thought: 'What a shame. I never worked like that. Just to depict something that I seriously think is great. 'At the same time, I always wanted to do pop art, big, colorful things that speak to you directly. "
Albert Oehlen, quoted from: Interview with Albert Oehlen by Max Dax, in: Galerie Max Hetzler (ed.), Albert Oehlen 1991-2008, Berlin 2008, p. 77.

Albert Oehlen uses the "pathos formula" of the triptych. He tells us a sacred story and paints it on panel. A large head with long hair, open eyes and open mouth, slightly crooked and no less theatrical, occupying the whole panel, a picture of the Savior, as we know it from iconography, is framed by two panels of the same size that look like landscapes; Landscapes structured by shapes, lines, fields and, last but not least, powerful gestures. As a whole intended as an altarpiece? Albert Oehlen is not necessarily unfamiliar with medieval church painting. He makes use of this here, in order to combine legible figuration with metamorphic abstraction in painting.

As a student in Sigmar Polke's class at the University of Fine Arts in Hamburg (1978–1981), Albert Oehlen took an active part in artistic and political debates of the late 1970s and early 1980s. At that time the end of painting was propagated. Apart from the historical relevance, there was still a lot going on, the generation of the "New Wild Artists" in Berlin or Cologne entered the stage and took over. Everything was possible, the big "Culture-Word-Time-Photo-Collage" began. At the beginning of the 1980s, with punk and new wave in music, art and painting in particular became a media event: the term "Neue Deutsche Kunst“ (New German Art)", which is celebrated in museums today, was on everyone's lips soon. The exhibition "Wahrheit ist Arbeit" (Truth is Work), curated by Zdenek Felix at the Museum Folkwang, Essen, in 1984, comprised works by Werner Büttner, Albert Oehlen and Martin Kippenberger, and was accompanied by a catalog, rather a kind of artist book showing the artists‘ as critical painters and poets with a tendency to self-degradation. The new wild painters are performers of a boisterous atmosphere of change, and with likewise boisterous content they provide a lot of keywords for enthusiasm here and rejection there. After years of joint development and rebellion against the art establishment together with Büttner and Kippenberger, Oehlen seemed to free himself from the weight of the demonstrative gesture. The painting became the real subject beyond the content.
Truth of painting

Albert Oehlen's painting shows, if one absolutely needs any ‘isms‘ for description, a proximity to Neo-Expressionism or perhaps better American Abstract Expressionism. Oehlen himself sometimes emphasized that he used their language without trying to achieve their visual impact. His encounter with the painting of the 'others' is not without critical distance and tends to be accompanied by hidden polemics. In the search for the truth in painting, Oehlen's pictures convey a lot of contradictory, narrative, technical or mechanically reproduced information. "Selected exaggerations", to speak with Peter Sloterdijk, with which Oehlen's pictures attack the viewer head-on. Far from parody or imitation, it is more a level of self-doubt that resonates, and yet remains expressive and wild. The artist is always concerned with the organization of everything that takes place in the picture, taking into account the narrative or perhaps less narrative. And at times there seems to be a certain randomness in terms of color, in terms of the gesture with which the composition is painstakingly organized. The seemingly coincidental or the relationship between the concrete - here, for example, a photograph, large letters on a poster - and the overpainting gesture stands as a structure, two portraits occupying the entire format on the left and right as a true basic structure, over which he lays an informalist veil. It is a painting in search of a gesture, an updated gesture that "could eliminate abstraction as potential", according to Oehlen.

His discourse on painting, the materiality of painting thus dominates, not least in repetition. With the monumental size of the canvases and the superimposed structures, the artist has been looking for a new way of dealing with abstraction since the mid-1980s and is on a quest for an interesting expansion of his possibilities: His path has led him via Pollock, via Helen Frankenthaler‘s color veils, over Franz Kline‘s powerful gestures, and not least over Willem de Kooning, whose imagery, a constant mediation between abstraction and figuration, made him one of his preferred 'house gods' and would always play an important role in Oehlen‘s creation. "I like the Abstract Expressionists. Most of all, I like the people who have also thought about the approach and the methodology and who conceived new aspects and parameters in painting."

In doing so, Oehlen is not concerned with staging an artist's statement, but with dissolving the boundaries of painting, as well as to probe these boundaries. In works were created before 1990, the surface of the picture was completely covered and condensed with over-painted collages, posters from advertising, which, as here, form a kind of substructure in formats of a width of three to four meters, or, rather seldom, in the form of a triptych. Maybe this is where the secret of Oehlen's painting lies: in the complexity, in covering up and obscuring, perhaps even taking back oneself in order to finally solve problems that arise, self-imposed. We also see a painting that, despite all its abstraction, eventually fancies Naturalism again and, as it is the case here, surprises with an over-sized portrait placed in the center of the triptych, amounting to an inversion of figuration and abstraction. "I wanted emotions! [.] But at some point I was fascinated by these nudes by Francis Picabia: someone told me that he just took great pleasure in painting these women. I thought: 'What a shame. I've never worked like that. To depict something that I seriously think is great. ' At the same time, I always wanted to do pop art, big, colorful things that speak to you directly." (Albert Oehlen, quoted from: Interview mit Albert Oehlen von Max Dax, p. 77, in: Albert Oehlen 1991 2008, Galerie Max Hetzler, Berlin 2008)
Despite all the seriousness with which Albert Oehlen makes an approach to render homage to the beautiful picture, the ironic has remained alongside the critic, chronicler, flaneur and observer. Albert Oehlen expressed his wish to Daniel Richter, his artistic friend: "Paint a really nice picture into which an incredible amount of truth has been squeezed into, but which looks like kitsch".

American Pop Art has been a difficult point of reference for Oehlen for years. The directness of the imagery and, above all, the relationship between figuration and abstraction, was rephrased for American art not least by Andy Warhol in the late 1960s, was groundbreaking. The striking motifs have an enormous radiance, but at the same time they lose their subversive power in the European context. The artist destroyed some of the pictures created in the late 1980s. Luckily that wasn‘t the case with our triptych from 1988, which can be considered one of the key works from this creative period. The center panel shows the portrait of a woman, while the two outer panels also reveal the outlines of two heads under abstract over- and in-painting. Approximization and distance determine Oehlen's relationship to Pop Art, and he expresses this ambivalence with painterly alienation and superimposition. Using the example of Sigmar Polke's work, he already got to know comparable strategies during his studies. Oehlen was aware that in the late 1980s he had to question painterly solutions rooted in the spirit of the 1960s. Not only is the painting of the 1960s seen in a completely different light, but the way we deal with the icons of the past has also changed. At the time when Andy Warhol chose her as a motif, Jackie Kennedy was a style icon, first wife and a symbol of the American soul. After the death of her husband and the marriage with Aristotle Onassis, admiration turned into spite. A press photo shows how the media reinterpreted her and how she went from Jackie Kennedy to Jackie O. Doesn't Oehlen also refer to print media with the usage of the letters? Don't the portrait‘s facial features, the broad chin, the hair, the eyebrows and the almost palpable disruption remind you of the omnipresent newspaper images of the fallen icon? [MvL / SN]
More Information
+
Bidding Options
+
Bid by telephon / written
+
Contact a specialist
+
Buying from A-Z
+
Preview & Auction Procedure
+
Catalogue Order
+
Register for
Albert Oehlen
+
Albert Oehlen Biography
+
Sell
Get a free appraisal for a similar object!
Share 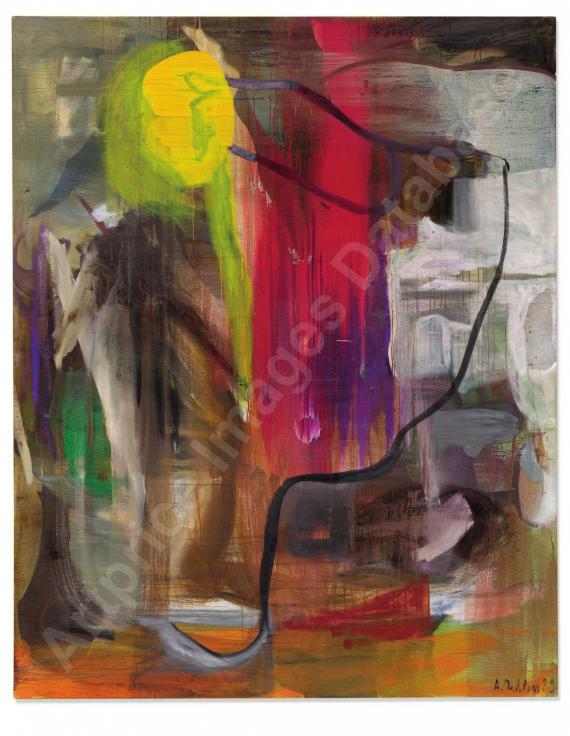 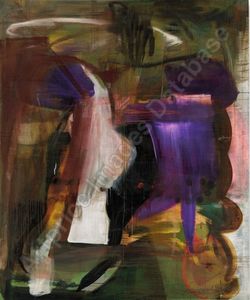 ALBERT OEHLEN
Untitled (1989)
Sold: € 3,538,196
You might also be interested in
+
and all other offers
Buyer's premium, taxation and resale right apportionment for Albert Oehlen "Ohne Titel (Triptychon)"
This lot can be purchased subject to differential or regular taxation.

Resale right apportionment:
In accordance with §26 of German Copyright Act, a droit de suite charge of 2.4% including VAT is levied for original artworks and photographs for the compensation of the statutory right of resale.
Albert Oehlen - lots sold by Ketterer Kunst
+
all