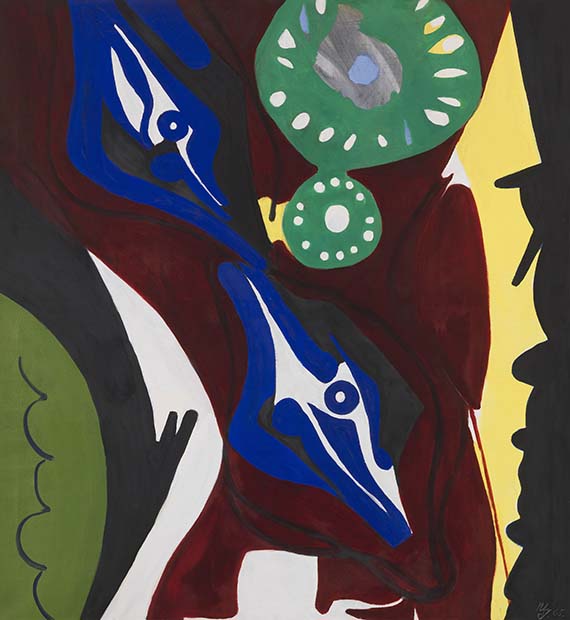 • A variety of intensive colors in an impressive format.
• First exhibited in 1966/67.
• From the important transitional period between the 'Eye Pictures' to the later "Spindle Pictures".
• Convergence of form and color in timeless perfection.
• Marvelous document of Nay's excellent artistic changeableness and progressiveness.
• Nay renders a playful acccount of his oeuvre's repertoire of forms.
• Similar works from this year are in, among others, the Nationalgalerie, State Museums Berlin, the Kunsthalle Hamburg, the Museum Ludwig, Cologne and the Collection Würth.

In the 1950s, E. W. Nay was one of the most controversially discussed artists of post-war modernism in the young Federal Republic of Germany, while his works had already been part of the most important museum collections of contemporary art for a long time, including the Museum Folkwang in Essen (since 1951) and the Kunsthalle Hamburg (since 1948). A few years later Nay reached the peak of his success. In 1960 the first monograph about him and his artistic work was published, in 1956 he took part in the 28th Venice Biennial and in both 1959 and 1964 his works were exhibited at documenta II and III in Kassel.
In the mid-1960s his painting underwent another major change - as it was the case so often in the course of his long artistic activity. After the gradual transition from the 'Disc' to the 'Eye Pictures' in 1963, art history witnessed the impressive transition to the spindle shapes in later pictures from around 1965, of which the work offered is a prime example. With the blue, diagonally, almost vertically arranged almond-shaped structures, this work is still rooted in the aforementioned series of the 'Eye Pictures' with which Nay had caused a stir a year earlier at documenta III. However, the narrow black, white and yellow stripes in the margins and the color field in a strong red swirling in the middle, already hint at the turning point that would soon follow. Nay suddenly turned away from geometrical forms and carried out an increasingly radical simplification and clarification of the pictorial plane. The area was divided into vertical lines that add rhythm and a dynamic flow to the composition. In lie with this progressive reduction of the formal language, E. W. Nay‘s color palette also changed. The artist allowed the color to unfold its intense, rich and clear luminosity on the canvas. It is all about the color spreading out as surfaces arranged side by side.

The artist attained the final non-representational character of his pictures as early as in 1952, even if the titles, as it is the case with the work offered here, repeatedly evoke figurative associations. The paintings "Phiole" (1967), "Dunkelblaue Perlen" (1966) or "Pfeilspitzen Schwarz - Rot" (1967) also suggest figurative representations, although they are entirely abstract compositions. With a wink, Nay titled the circular formations in strong, fresh green and with the small white dots we also find in other works from this period, "Die Uhr" (The Clock), although he only cared for the creation of a perfect unity of simple shapes and strong, clear colors: "It is worth a lifetime to go as far as it takes for the true color image to emerge, and that the color sounds - without any particular intention on the artist's side – that the humane becomes visible, the humane and the creatural in a new, unknown formulation." (E. W. Nay, contribution to the ex. cat. Ernst Wilhelm Nay, Galerie im Erker, St. Gallen 1968, quoted from: Lesebuch, p. 297/298.).
In the work offered here, Nay repeated a certain repertoire of forms from his earlier creative period, puts slightly modified, round 'Discs' next to the known 'Eye' formations, and yet heralds the later ‘Spindles' in form of the slender color paths, the strong, clear colors and the flowing, vertical arrangement of the picture. [CH]
More Information
+
Sell
Get a free appraisal for a similar object!
+
Register for
Ernst Wilhelm Nay
+
Buying from A-Z
+
Contact a specialist
+
Ernst Wilhelm Nay Biography
Share