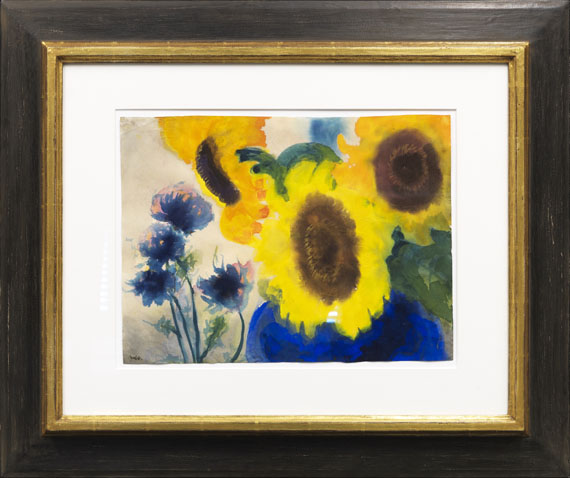 • This large-size sheet is of a particularly high-quality.
• For Nolde flowers have "souls", especially the sunflowers, with their human physiognomy, are bearers of a strong expression.
• Virtuoso interplay of tenderness and radiance.

Accompanied by a photo expertise issued by Prof. Dr. Manfred Reuther from March 14, 2022. The watercolor is registered under the number "Nolde A - 232/2022" at the Archive Reuther.

"The sunflowers rise so tall and I, with my neck bent backwards, gratefully marvel at this beauty. It was a couple of fine days, incredibly glowing colors, the mignonette scent wafted all the way into the house."
Emil Nolde in a letter to Hans Fehr from 1928

Needless to say that Emil Nolde's watercolors are particularly captivating due to the selection and quality of their pure and unadulterated colors. The radiance of this sheet can also to take up an entire room. Emil Nolde loved plants and recognized their nature. No matter where he settled with his wife Ada, every home was surrounded by a lush flower garden. Each of them a little Garden Eden interspersed with lovely flowerbeds. All the luminous plants that can be found in Nolde's pictures thrived there under the careful care of Ada and her helpers. Especially dahlias, known as georgines in Nolde's time, sunflowers and poppies can be found in the Nolde garden. In his works, he takes us to this beautiful gardenin summer. At first, the sunflowers hardly found their way into Nolde's pictorial world. The first oil paintings with sunflowers only appeared in the late 1920s, inspired by the garden in Seebüll. A large variety of watercolors with this motif followed. The large flower heads are mostly shown in close-up view against the dark blue of the sky, sometimes with their heads tilted, sometimes with the petals ruffled by the wind. The flowers are staged large, mostly in a narrow frame, so that they can hardly be brought into the spatial context of the garden. But from his numerous statements we know about the inexhaustible source of inspiration of his home environment. In the 1930s, the artist had a small thatched garden house built in his garden, which he called "Klein-Seebüllchen" (Little Seebüll) and served as a shelter in which he made watercolors of flowers on Japanese paper in quick succession even at an old age. The technique of watercolor painting accommodated Nolde's desire for spontaneity and direct expression. In his work he strives to switch off the inhibiting mind and to work purely intuitively from the emotion: "The painter does not need to know much, it is nice when, under instinctive guidance, he can paint as unerringly as he breathes as he walks ." (Emil Nolde, Jahre der Kämpfe, p. 201). Without any preliminary drawing in pencil or chalk, the artist worked directly with the watercolor brush. He captured the color chord of his blossoms in the wet Japanese paper and thus allows the purity of the watercolor paint to enter into an intimate connection with the paper. It is a deeply sensual interpretation in which the brilliance of the colors. [SM]
More Information
+
Sell
Get a free appraisal for a similar object!
+
Register for
Emil Nolde
+
Buying from A-Z
+
Contact a specialist
+
Emil Nolde Biography
Share