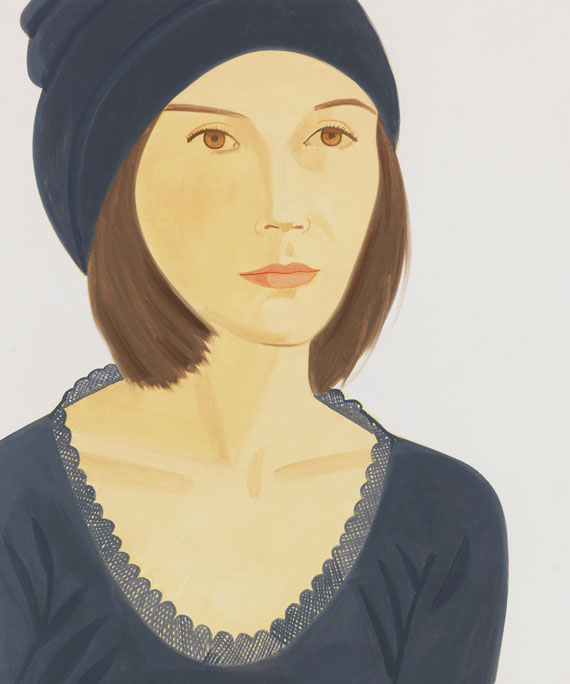 • Large-size work in the artist's characteristic cool matter-of-fact style.
• Katz’ paintings are extremely rare on the German auction market.
• The human face serves Katz as an artistic surface. Fashion details are used as stylistic elements to create an immediate presence.

Alex Katz - an outstanding figure of contemporary painting
Alex Katz undoubtedly is one of the most important and influential American artists of the past 60 years. Born in Brooklyn, New York, in 1927, Alex Katz grew up in St. Albans, where his family, who came from Russia, had moved in 1928. As Alex Katz's parents shared their enthusiasm for art with him, they also supported his career decisions and enabled him to begin his training at the Cooper Union Art School in Manhattan in 1946. He learned about European cultures in his studies at the art school and through the Young Artists Guild, as well as during the summer months of 1949 and 1950 when he attended the Skowhegan School of Painting and Sculpture in Maine. Newly acquired knowledge of Bauhaus, Cubism and plein-air painting would have a lasting impact on him. In 1954, five years after graduating, Alex Katz showed his works for the first time in a solo exhibition at the Roko Gallery, New York. Alex Katz's years of training paralleled the heyday of Abstract Expressionism, which also did not leve the young artist and his early works unaffected. In the 1950s, Alex Katz became a key figure of early Pop Art. He remained true to this style: At the beginning of the 1960s, his works referenced mass media and the visual worlds of advertising. Painting was increasingly accompanied by printmaking, the favorite medium of Pop Art, which Katz mastered with virtuosity. The 1980s bear witness to the artist's turn to the "parallel world" of fashion design. After all, he devoted himself to large-format landscapes. Flower pictures, as well as the depictions of dancers and nudes Alex Katz made in the millennium deliver the proof that Pop Art is still a style of outstanding importance today. For 70 years now, His unique style has been formative for modern figurative painting for 70 years. Celebrated for his iconic portraits of style-conscious women and for his impressionistic landscapes, the today 94-year-old Katz has inspired generations of painters.

The face as an artistic surface
The traditional genre of the portrait, like the landscape, characterizes Alex Katz's oeuvre. His large-format portraits are strikingly staged as close-ups. The physiognomy is reduced to the essentials, but the individual characteristics of the person portrayed are captured in razor-sharp manner. Katz's interest in his models, most of which come from his immediate surroundings, has little to do with the person himself. Appearance and demeanor may play a role, but his approach is systematic-analytical. He is committed to the precise color gradations and the texture of skin and hair, the proportions and surfaces of the face, but above all their relationship to the incident light. The portraits are the result of a precise observation of nature and remain free of any emotionality. His wife Ada always was his number one model. Due to her strong presence in a great number of works, she definitely plays a special role, however, in terms of expression her portraits do not differ at all from those of other models. She, too, stands for a certain type, a role that Katz creates from her face. To him it is not about anything emotional, even in portraits of family members, he is only interested in distilling the essence of the subject. "The object depicted is absolutely unimportant. It's about painting, about the power and energy of painting" (quoted from: Kristy Bell, Es kann ein hübsches Mädchen sein oder auch was ganz anderes, in: Jacob Proctor (editor), Alex Katz. Painting the now, 2018, S. 12) His artist eye only cares for formal aspects, and in doing so he developed his typical visual language, which is often described as cool and clean. It is determined by radiant color contrasts, figures and landscapes with sharply cropped contours, as well as perspectives reduced to surfaces. It is a visual language characterized by deliberate omission. Katz himself put it this way: "You show this and that, but leave something out, and then your mind fills this gap. If the picture contains everything, you don‘t create any effect" (quoted from: Toni Stooss, Alex Katz, 2013, interview with Sharon Corwin, July 22, 2011, p. 200). Katz's flat painting style, synthesized from monochrome color surfaces, creates an alienation of the three-dimensional reality, and guides the eye of the beholder beyond the content of the picture and to the essence of art. By reducing and focusing, he repeatedly explores the transitions between figuration and abstraction.

Fashion in art
In his art, Katz is looking for the immediate present and nothing is as present as the latest trends in fashion. The fashion motif, largely scorned by the art world, is an important aspect of Alex Katz's work. He says: "Style was the content of my painting and style belongs to fashion and fashion is an immediate present" (Interview TateShots 2018). Especially in New York, where the artist lives, fashion is omnipresent; it is a cosmopolitan city and home of fashion, a place where elegance and beauty are enormously important. This influence has been visible in his work from very early on, since the 1950s, and Katz has also been using haute couture as a compositional element since the 1980s. His intuition for capturing the essentials of what is fashionable and chic - especially in New York City - is what distinguishes his work. Iconic images such as "The Black Dress", "Pas De Deux" and the shop windows of Barneys, New York, have presumably made him the most important fashion painter of recent times. In his unmistakable style, he captures the American look and at the same time shapes it. With the fringed bob and the cool beanie hat, "Tara" stands for a casual big city street style. For Katz, fashion is a legitimate and equal art form: “art moves just like fashion … people think fine art is above fashion, and I think that‘s ridiculous! … The fashion world is moving into the art world, and not the other way around. "(Quoted from: Vincent Katz (editor), Invented Symbols: An Art Biography, 2012, p. 114) Making fashion the theme of his painting gives his art a strong immediacy and pays homage to the moment. [SM]
More Information
+
Sell
Get a free appraisal for a similar object!
+
Register for
Alex Katz
+
Buying from A-Z
+
Contact a specialist
Share