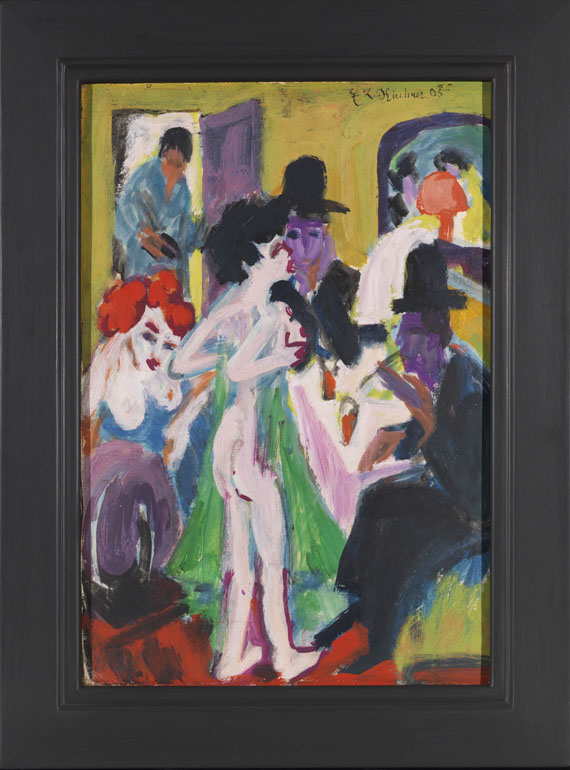 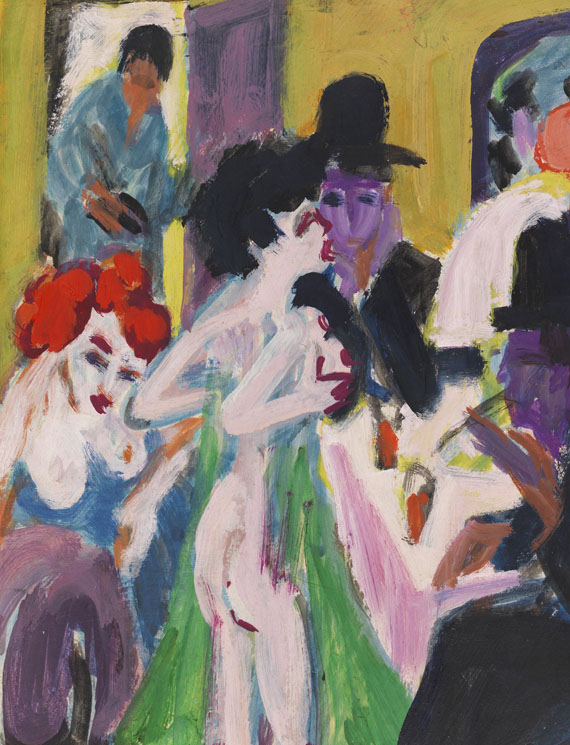 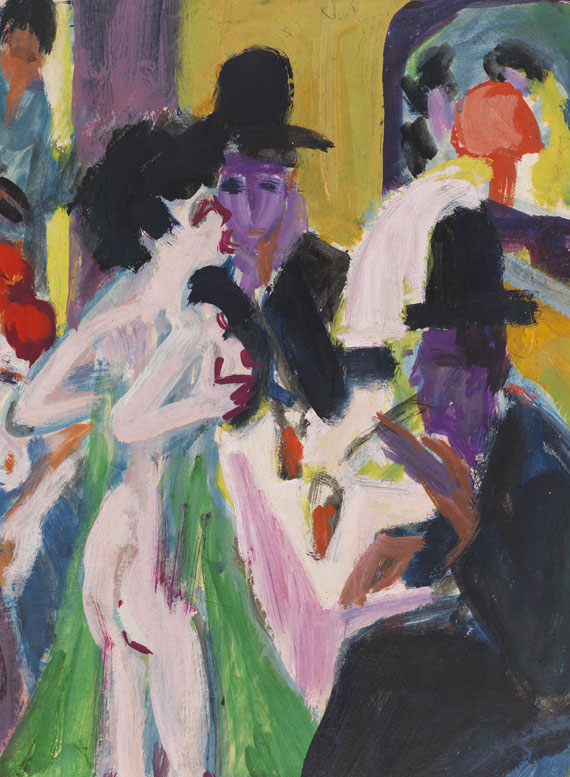 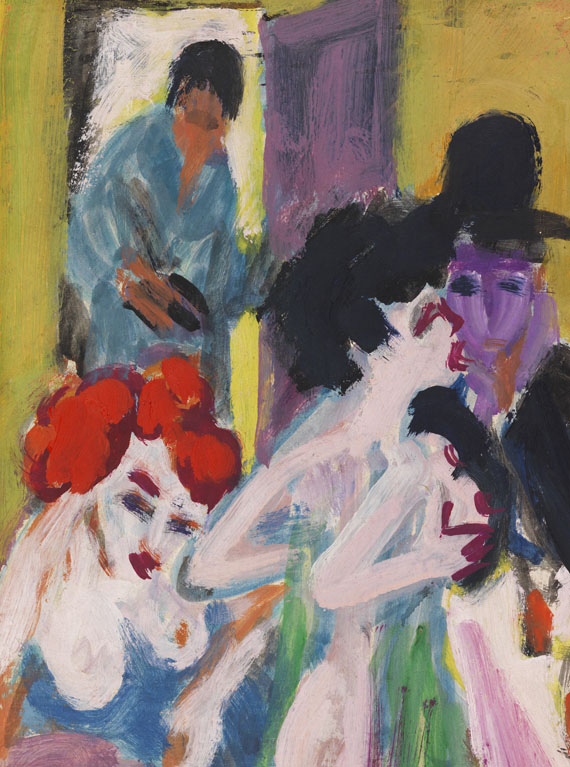 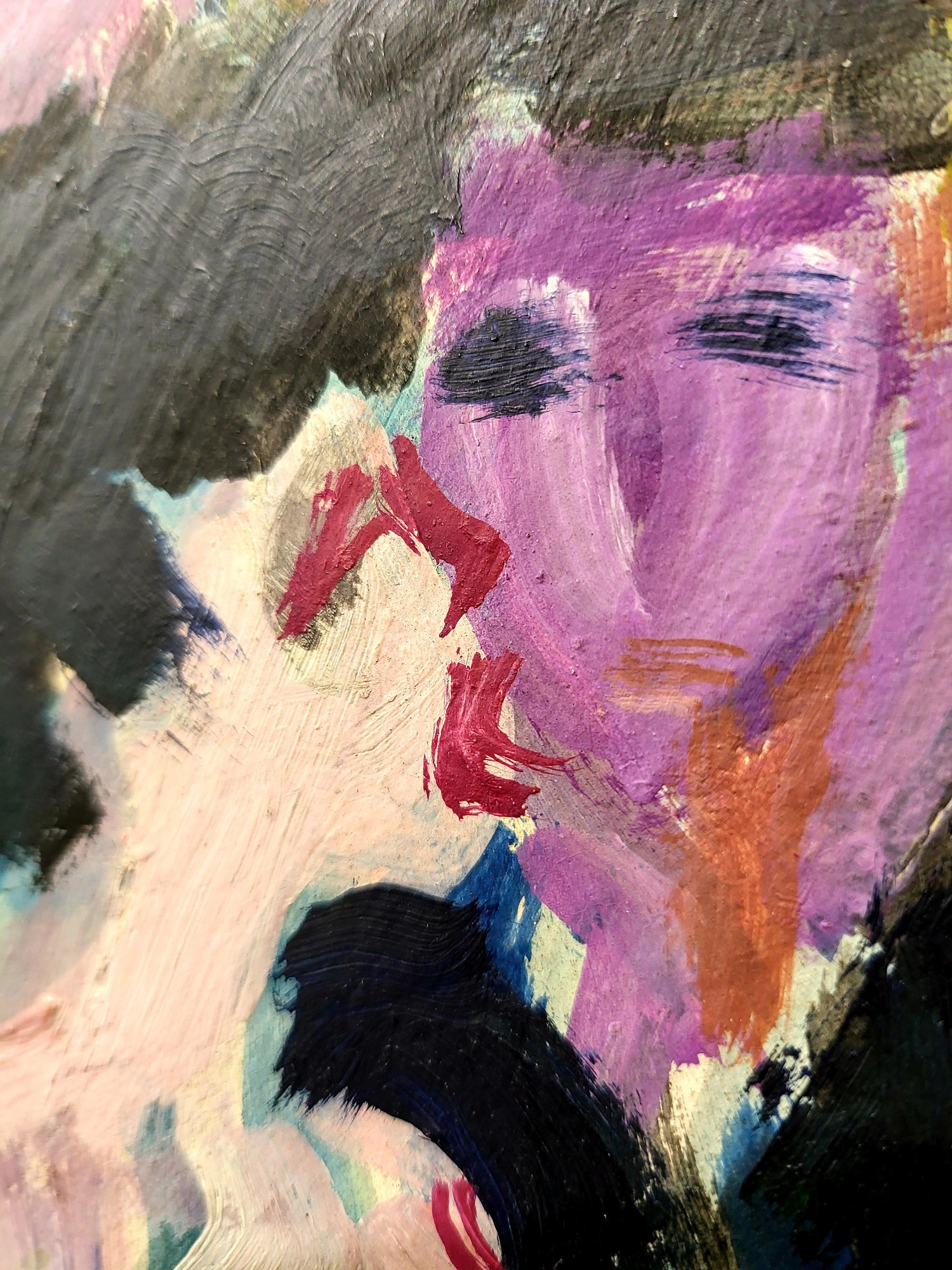 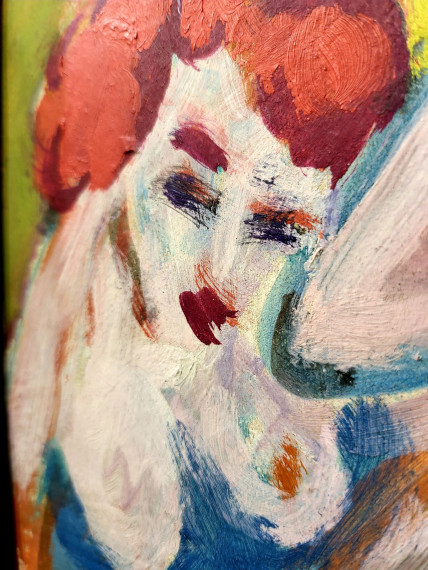 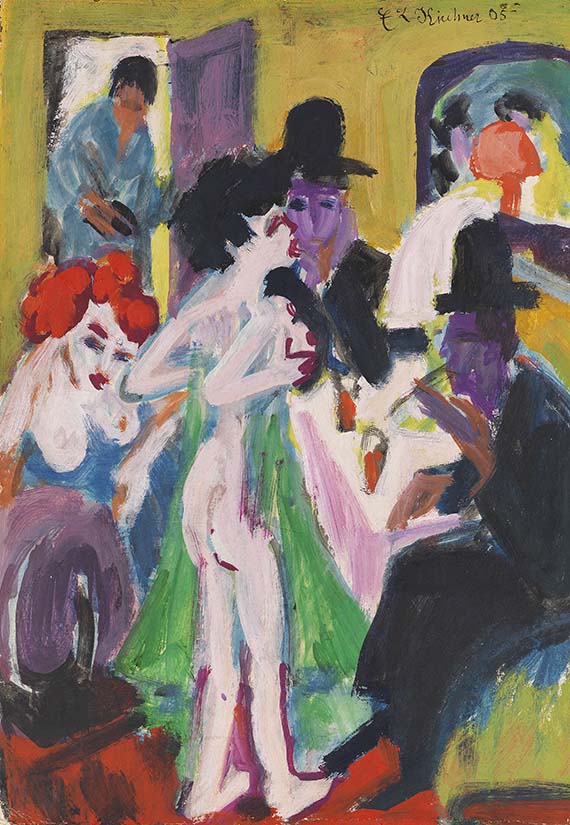 PROVENANCE: Collection Walter Kern (1889-1966), St. Gallen (until 1955; the collector was a friend of the artist).
Gutekunst & Klipstein, Bern (acquired from the above in 1955)
Private collection Düsseldorf (before 1968).
Ever since famliy-owned.

The brothel that Kirchner depicted here is quite bustling. Two men, one of them smoking, dressed in black with high hats sit at a table with drinks, their backs towards an arched opening leading into another room. Opposite of them, two women with their hair dyed red and black, rather lightly dressed, openly show their merits and woo their suitors‘ attention. A brightly colored scene that tells of suitors and prostitutes, and dancers who make some extra money. The transitions between the world of pleasure and prostitution is a gray area. The examination of these erotic themes reflects Kirchner's bohemian lifestyle. Even during his time in Dresden, Kirchner rendered encounters in the studio with an increased degree of eroticism; in Berlin, corresponding images came from Kirchner's surroundings, from his contacts and his lifestyle. Kirchner was confronted with bars, dance performances and prostitution; with the so-called cocottes, as the Berlin prostitutes were called, not only in context of the big city night life, but also in circles of poets, which he was associated with. At the end of 1913 Kirchner illustrated Alfred Döblin's drama "Comtesse Mizzi", the moral story of a prostitute. But the cocottes were not only typical representatives of the big city for the poets, especially for Kirchner, who staged them in his street scenes, they represent the actual artistic discovery he made in the metropolis. For the artist, the street scenes were an expression and a natural part of society in the modern metropolis, and this includes Kirchner's encounters in brothels. The cocottes on the streets, or, as it is the case here, in the brothel, are not a motif for decrying social misery, but an everyday aspect of an urban society. Kirchner abstracts what is happening and transforms the prostitute's offerings into a sensual experience, transforming the scene into a vibrant language of its own beauty.
Donald Gordon dates the brothel in the catalog raisonné from 1968 to the end of 1912. In doing so, he rightly ignores the fact that Kirchner predated the work "05". Gordon rightly added a second date, which he assumed to be 1920. The reason for this can be found in Kirchner's approach from his early days in Davos. Because when Kirchner made the decisionto settle at the ‘Haus in den Lerchen‘, he asked Erna Schilling, who was still living in Berlin, to close the studio and to little by little send the works to Frauenkirch. A journal, which he started in July 1919, provides information about his activities: It includes thoughts on art theory, drafts for his essays, opinions on personal encounters, as well as notes about the artist's complex working days: "27. Aug. I'm eagerly waiting for medicine from the doctor [Helene Spengler]. My life is an eternal waiting and mourning, there are no more quiet moments. I have to make 5 pictures [..] and revise some pictures. " A month later he made the following short entry: "27. [Sept.] Catalog and restoration of Erna‘s nude"; two days later: "29 [Sept.] Worked a little on old pictures and arranged a lot of sheets . Sent Schames some graphic works"; and the following week he made an on October 6th: "Got back to a large street picture, thoroughly restored, I am completely satisfied."
(Lothar Grisebach, EL Kirchners Davoser Tagebuch, Cologne 1968, p. 59, 64ff.) In autumn 1919 Kirchner was busy creating a catalog of his paintings, especially those that had been sold by then, and to organize the graphic works for the catalog raisonné, as well as to conceive new subjects for his pictures. Accordingly, Kirchner also 'restored' the brothel scene, in which he carefully changed the expressive, sometimes hectic painting style of the Berlin years by subtly calming the surface. Last but not least, the overpaintings also serve Kirchner to prove style-critical changes after the First World War as a continuum of the early works, in order to document a consistent stylistic development. Under certain circumstances, only few would have noticed this if Kirchner had not reported himself about his activities in the diary or if he had not documented the respective conditions with photos and if none of the photographed first versions of the book about Kirchner's work had been holographed by Will Grohmann, thus a before and after could be proven. With the process of a conservational overpainting, Kirchner proved to be his most radical critic, who not only updated his early work, but also changed the expressive, restless expression of the accidental in his early works into classical compositions removed from their contemporary setting. This approach is now visible as a key moment in Kirchner's biography, his strong understanding of himself as a leading and always innovative artist personality, as a constant innovator of art.
Despite the obvious change of the first state by Kirchner's hand around 1920, Gordon's date to 1912 can be questioned, because the pen and ink drawing “Bordell” from 1913 shows an almost identical scene as in the painting. (See fig.) In addition, this drawing seems to have been extremely important to Kirchner as he had it included into the volume of Kirchner's drawings published by Will Grohmann in 1925. Kirchner's protagonists began to wear the characteristic hats in paintings made at the end of 1913, especially the men looking for the cocottes, who populate the Berlin street scenes in 1914. [MvL]
More Information
+
Bidding Options
+
Bid by telephon / written
+
Contact a specialist
+
Buying from A-Z
+
Preview & Auction Procedure
+
Catalogue Order
+
Register for
Ernst Ludwig Kirchner
+
Ernst Ludwig Kirchner Biography
+
Sell
Get a free appraisal for a similar object!
Share 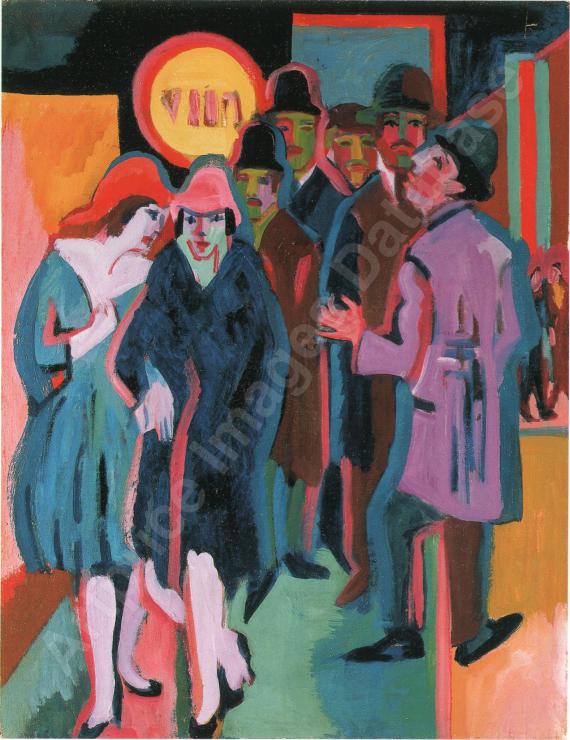 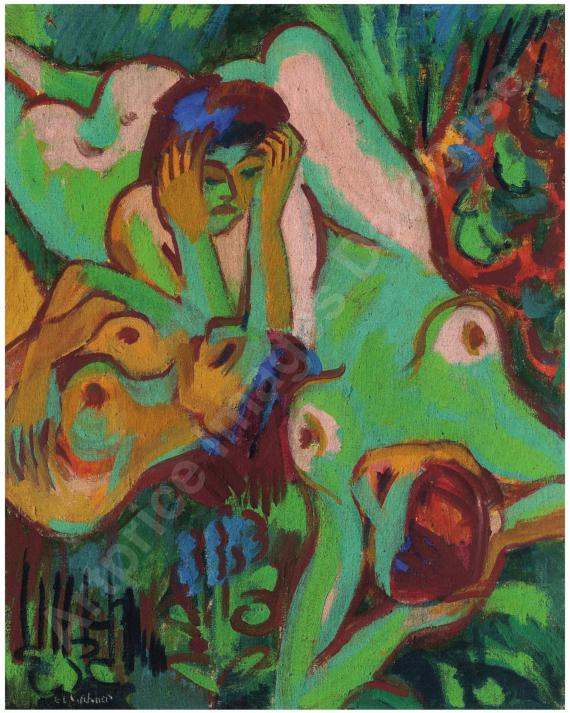 Resale right apportionment:
In accordance with §26 of German Copyright Act, a droit de suite charge of 2.4% including VAT is levied for original artworks and photographs for the compensation of the statutory right of resale.
Ernst Ludwig Kirchner - lots sold by Ketterer Kunst
+
all