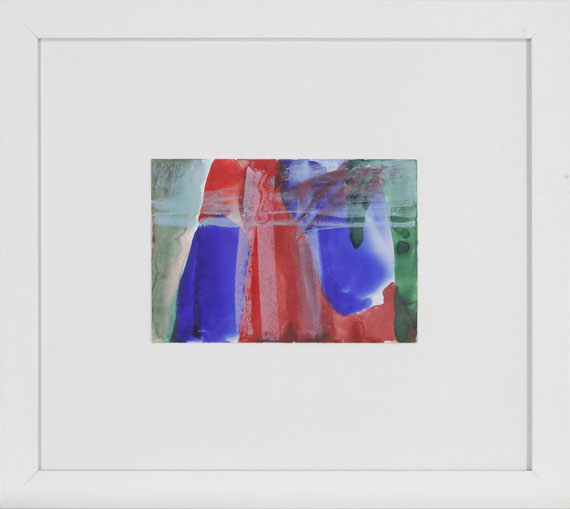 enlarge image
+
234
Gerhard Richter
Colmar (I-V), 1984.
5 Watercolors with grease crayon and graphite
Estimate:
€ 500,000 / $ 460,000
Sold:
€ 889,000 / $ 817,880
(incl. surcharge)
Colmar (I-V). 1984.
5 Watercolors with grease crayon and graphite.
Each signed and dated "7.2. 84".Each with title and consecutive number on the reverse. On wov paper. Each up to 18 x 23.8 cm (7 x 9.3 in), each the full sheet.
This work is registered in the online catalog raisonné of the watercolors.
• Watercolors make for a small but important group in Richter's oeuvre.
• This is the first time that a series of Richter watercolors is offered on the international auction market.
• Each sheet is a gem in blazing colors from the year of his international breakthrough.
• A similar series of five watercolors from the same year is in possession fo the MoMA in New York.

According to the art compass annually published in the magazine "Capital", Gerhard Richter continues to head the list of the world's most important artists. He has maintained this top position for 18 years now, closely followed by Bruce Nauman, Georg Baselitz and Rosemarie Trockel. The fascination with Gerhards Richter epochal art is unbroken. Last year the Metropolitan Museum of Art in New York honored the groundbreaking work of the exceptional German artist with the large solo exhibition "Gerhard Richter – Painting after all". He is an artist of superlatives, his paintings are sold at record prices and can be found in all major museums. The painting that has won the highest price to date is an abstract painting from 1986, sold by Sotheby's in 2015 for an unbelievable price of € 36,328,500 million. Shortly before this work was made, Richter had his international breakthrough. The exhibition responsible for this was "von hier aus", curated by Kasper König in Düsseldorf in 1984. Gerhard Richter took part with nine abstract pictures he had painted for the exhibition. The artist himself said that the bright yellow, abstract, large-format pictures triggered an avalanche. In March 1985 the exhibition traveled to New York with additional works and was shown at Sperone Westwater and the MAarian Goodman Gallery. The interest of private collectors and museums was so enormous that prices doubled before the opening. Both exhibitions nearly sold out on their opening evening, the Museum of Modern Art purchased a painting, as did the Australian National Gallery and the Museum of Fine Art Boston. This success shows Richter's topicality and the significance of his work. The year 1984, which was so important for the artist, was also the year the present watercolor series "Colmar" was made.
Watercolors appear in phases in Richter's œuvre. His first watercolors and drawings, which, like his paintings, were initially based on photographs, were created in 1964. From then on, the works on paper appeared at larger intervals and usually in systematical series. A more intensive examination of the watercolor began in the late 1970s and reached its peak in the 1980s. It was not until 1985 that works of this genre were exhibited at the Staatsgalerie Stuttgart for the first time. At first, Richter’s watercolor art seemed to be too playful, as he feared that the resulting sheets might be too seductive, too "artistic". In general, the medium of watercolor painting played a subordinate role in post-war modern art, and it was not until the 1980s that it became an important means of expression again for various artists, among them Beuys, Tuttle, Palermo, Polke, Baselitz, Graubner or Gerhard Richter. Formally, the artist faced the same questions, regardless of whether he worked in oil or watercolor. He tried to transfer the expressive possibilities of the watercolor and its lightness onto the big canvas. The artist appreciated a work process only possible in this medium – pouring, dripping, applying paint - because the result cannot be precisely planned. This creates a "nonchalance" (G. Richter, in: Dieter Schwarz, Gerhard Richter: Zeichnung 1964-1999, Düsseldorf 1999, p. 7.), which is difficult to achieve in oil paintings and which is particularly important to Richter, because it allows the artist take a back seat as a subject, while material and color come to the fore. The first layer is laid out in broad red, blue or yellow fields, with grease crayon above it, at times also vice versa. "By restricting myself to primary colors, I avoid having to mix a certain tone first, because it would then be less neutral, but maybe extravagant or tasteful or as always. So it is better to start with red, blue and yellow, the mixtures happen of their own volition anyway." Gerhard Richter, quoted from: Gerhard Richter, Texte 1971 bis 2007, published by Dieter Schwarz, Cologne 1999, p. 352) The serial work method and the principle of chance are both integral parts of Richter's artistic work, also of his watercolors. He develops the luminous small-sized works in short and intensive work phases. "From 1984 on I used blocks with watercolor paper, just the way it should be. There were about eight to twelve blocks next to each other, and, just like the pictures, these could be laid out as a series, each progressed differently over a few days, and then all of them were more or less finished together." (Gerhard Richter, quoted from: Gerhard Richter, Texte 1971 bis 2007, published by Dieter Schwarz, Cologne 1999, p. 348)


What makes this series "Colmar" so rare and special is that the sheets as such remained together and were not torn apart by an accomplished collector. Gerhard Richter often used a date as title. The artist usually titles his abstract works after completion, and they are purely associative. But the titles can also express a form of admiration, for example for an artist. In our case it is a homage to the Isenheim altarpiece in Colmar. A work of art that touched Richter deeply, and that he mentioned again in a recent interview in 2016, more than 20 years after the present watercolors were created. Richter's interview partner was the curator of the Louisiana Museum in Copenhagen. The interview with the title "In Art We Find Beauty and Comfort" was released as a series of artist talks on the museum's own video channel. When Richter was asked whether art had power, he replied: "[..] Art has value. Art offers solace. I recently visited Colmar and saw the the Isenheim altarpiece, a tragic story! A great picture, it is wonderful, it is consoling, because it is beautiful. […]" When painting watercolors, Richter gives in to whims and moods. The enthusiasm for this medieval work of art finds new expression in Richter's abstract imagery and fascinates a new generation of art recipients. [SM]
More Information
+
Sell
Get a free appraisal for a similar object!
+
Register for
Gerhard Richter
+
Buying from A-Z
+
Contact a specialist
+
Gerhard Richter Biography
Share