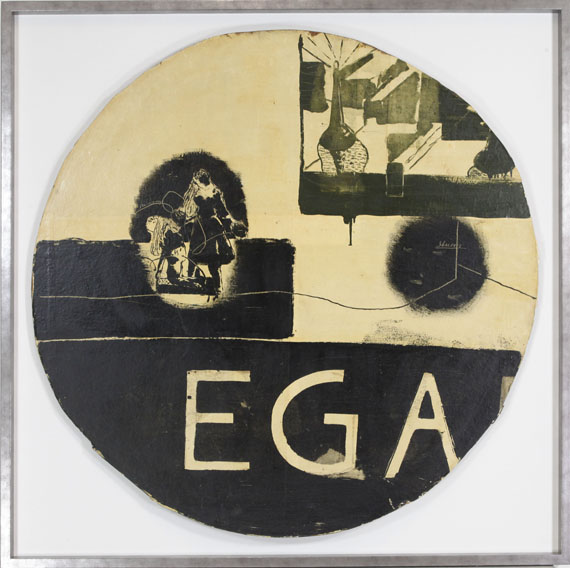 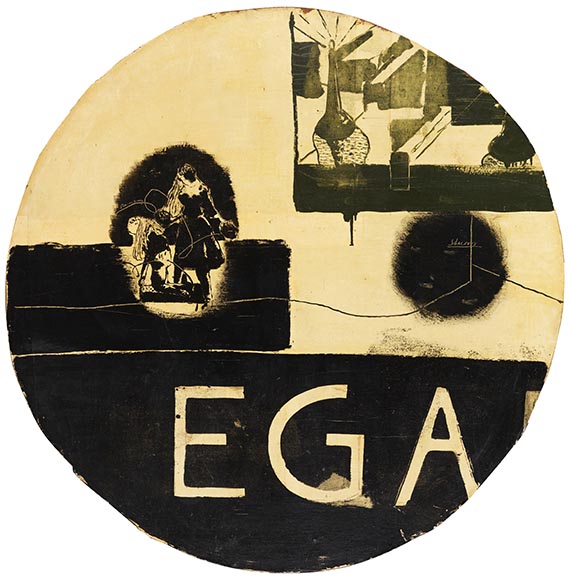 • One of just a few works from the early 1990s in this unusual round format.
• To date only three works from this early series have been offered on the international auction market.
• With their dreamlike amalgamation of pictures and text fragments, the early round pictures anticipate the artist's later characteristic enigmatic iconography.
• Other works from the 1990s are in many international museum collections like Städel Museum, Frankfurt am Main, the State Art Collections Dresden and the Mudam, Luxemburg.

PROVENANCE: Private collection Saxony (acquired from the artists in the 1990s).

"The decision to work in this unusual round format eventually resulted from the situation Neo Rauch was in: It reflects the 'rounding up' of potential pictorial solutions, a circular motion on the quest for a new approach, […]."
Holger Broeker, in: Neo Rauch. Neue Rollen. Bilder 1993 bis 2006. Published by Kunstmuseum Wolfsburg 2006, p. 21.

Neo Rauch is one of the most successful German painters of his generation and is considered the main protagonist of the New Leipzig School. In 2000 the Galerie für Zeitgenössische Kunst in Leipzig honored him with a comprehensive solo exhibition to him, which was later also on display at the Haus der Kunst in Munich and the Kunsthalle Zürich. In 2001 he took part in the 49th Venice Biennial. Since then Neo Rauch's work has been shown in large , international solo exhibitions, including at the Metropolitan Museum of Art in New York, the Palazzo Pitti (Gallerie degli Uffizi) in Florence, the Albertina in Vienna and the David Zwirner Gallery in Hong Kong.
Since his early works from the 1990s, including the work offered here, Rauch has dedicated himself entirely to figuration. His picturesque universe with a highly enigmatic narrative level seems to come from a world remote from our reality. The image structures are legible, but not necessarily easy to decipher. They are a mix of Socialist Realism, which he has been familiar with since childhood, and colorful storybook aesthetics. Rauch lets fantastic, dream-like scenes correlate with everyday things in his figurative, narrative works, creating surreal and puzzling dream worlds.
At the beginning of his artistic career, shortly after the German reunification in the 1990s, the artist decided to make a few works on round image carriers, which he pasted with paper using a collage-like technique, mostly painted with faceless, shadowy figures and abstract, stencil-like industrial landscapes with individual words.

The round picture offered here also testifies to this peculiar structure and design of the pictorial surface. While he the upper right corner shows indistinct industrial buildings with smoking chimneys, which is also found in other tondi, the mid section shows an enigmatic figural scene with stencil-like figures protruding from the dark background and marked with the note "Reinigung“ (Cleaning), while the circular, dark color cloud says"Sturm" (Storm). Despite the fine connecting lines, one searches in vain for a clear connection between the individual motifs and their narrative associations. The observer doesn‘t find closure, the riddle remains unsolved.
While Rauch also uses the 'grattage' technique, developed by Max Ernst, for the artistic process of scraping the paint off, the use of a collaged image carrier and the juxtaposition of image and text are certainly based on the art of Dada, e.g. by Kurt Schwitters or Francis Picabia, which in the work offered here are additionally emphasized by the colorfulness reminiscent of an older newspaper clipping or a sepia photograph.

With the dreamlike amalgamation of figuration, abstraction and enigmatic text fragments, the tondi make for the actual beginning of the artist's fascinating oeuvre and already contain the characteristic enigmatic imagery that would determine all of his painterly work in the years that followed. The artist himself is well aware of the importance of his round pictures and so he shows two of them on the wall of a stone mausoleum or pagoda temple in the monumental painting "Rückzug" ( Retreat, 2006, Fondation Beyeler, Riehen / Basel) - as a painterly summary of his earlier work and symbol of his first successes on the way to his current artistic self.

Neo Rauch's works are now part of the most important public collections in the world, including the Museum of Modern Art in New York, the San Francisco Museum of Modern Art, the Fondation Beyeler in Riehen / Basel, the Stedelijk Museum in Amsterdam, and the ESSL Collection at the Albertina in Vienna. Further round pictures from the 1990s can be found in, among others, the Museum of Fine Arts in Leipzig and the Wolfsburg Art Museum. [CH]
More Information
+
Sell
Get a free appraisal for a similar object!
+
Register for
Neo Rauch
+
Buying from A-Z
+
Contact a specialist
+
Neo Rauch Biography
Share