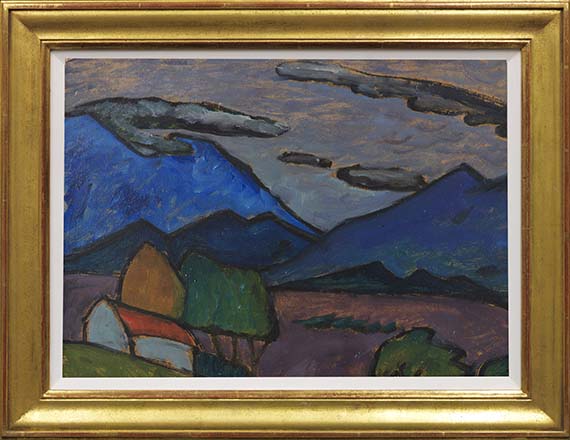 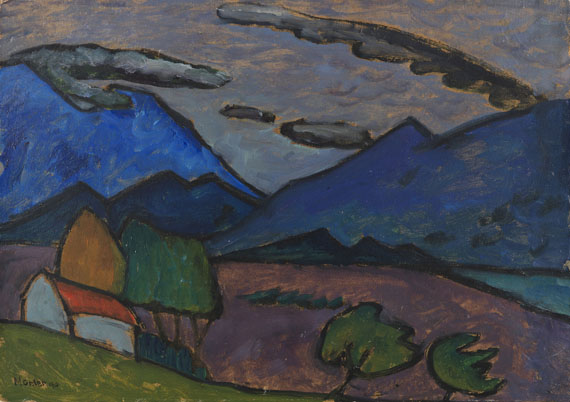 Accompanied by a written confirmation issued by the Gabriele Münter- and Johannes Eichner-Foundation on October 27, 2015. The painting will be included into the forthcoming catalog raisonné of paintings.

The turn to a synthetic, expressive color painting

Something astonishing happened in Murnau in autumn 1908 when Wassily Kandinsky, Gabriele Münter, Alexej von Jawlensky and Marianne von Werefkin met and painted in this Upper Bavarian town after long stays, especially in Italy and France: an artistic upheaval, a radical rejection of impressionist and late-impressionist painting, and a turn to synthetic, expressive color painting. "We saw Murnau on a trip, and recommended it to Jawlensky and Werefkin – who also met us there in autumn. We stayed at the Griesbräu Inn and liked it very much. After a short time of agony I made a big leap - from painting nature - more or less impressionistic – to feeling a content - to abstracting - to giving an extract", wrote Gabriele Münter in retrospect in 1911. (quoted from: Helmut Friedel, Annegret Hoberg, Der Blaue Reiter, Munich 2000, p. 24).

The Murnau community and its surroundings

With the aim of realizing a decorative effect, these artisan houses were built in Murnau under the direction of the Munich architect Emanuel von Seidl between 1906 and 1910. Today they still coin the town‘s streetscape. There are vast moorlands to the south of Murnau, the ‘Murnauer Moos‘ with the rivers Loisach and Ramsach, between the ridge with the village and the pre-Alps rising to the southwest and southeast: Herzogstand, Heimgarten and Hohen Kisten, Ettal-Ammergauer Mountains and the Wettersteingebirge, Alpspitz and Zugspitz in the distance.

The progressive restriction to just a few details characteristic of this landscape is a common feature of the pictures by the ‘new‘ Murnau artists. Jawlensky's "Schwebende Wolke" (Floating Cloud), Kandinsky's "Kochel – Gerade Straße" (Kochel - Straight Road) or Münter's "Wind und Wolken“ (Wind and Clouds) – all are different expressions of the radical means the artists used to reshape what they saw and how they attained fascinating color compositions (and a comparable painting style) from an almost central perspective: houses, trees and mountains appear as homogeneously painted surfaces, framed by colored contours; colors mixed in bold nuances between red and blue in Kandinsky art, somewhat more subdued and accentuated with violet, green and yellow in Jawlensky‘s pictures; Colors that interprete the impression of the landscape, arranging it and turning it into an experience. These landscapes can still be experienced as rural cultural landscapes today, either on the way to Kochel or, in opposite direction, on the way to Seeleiten/Berggeist in the direction of Kohlgrub. In the spirit of Kandinsky, who, in the founding circular of the "Neue Künstlervereinigung München" from January 1909, called for the quest for artistic forms “that have to be liberated from everything that is irrelevant in order to express only what is necessary – in short – striving according to artistic synthesis." (Ibidem, p. 26)

"Striving for an artistic synthesis" in Upper Bavaria

"It was a nice, interesting and joyful time, with a lot of discussions about art with the enthusiastic Giselists [so named after their apartment in Giselastrasse]", as Münter noted in her journal in 1911 in memory of the Murnau summer. (Quoted from: Annegret Hoberg (editor), Wassily Kandinsky und Gabriele Münter in Murnau und Kochel, 1902-1914. Briefe und Erinnerungen, Munich 1994, p. 46) "I particularly liked to show Jawlensky my work, on the one hand, he always said an encouraging word . many of them .. on the other hand, he also explained a lot of what he had experienced and gained and spoke of synthesis. He's a nice colleague. All four of us aspired a lot, and each one evolved. There were days when I painted five studies (the cardboards 33 x 41) and a few days when I didn't paint at all. We were all hardworking." (Ibidem)

From the very first moment on Gabriele Münter was fascinated by the natural beauty of the 'blue land', as the area around Murnau is also called. On October 29, 1910, she wrote to Kandinsky in Moscow, ".. it was unique today. Such an air .. The sky was so blue - and white thin clouds. The mountains in the shade so - dark blue." (Ibidem, pp. 54 and 74ff.).

The so-called "Russenhaus". A studio for the new image

Gabriele Münter bought a house in Murnau as early as in June 1909; it was located on the slope opposite the Murnau Castle and the stately baroque church of St. Nicholas. The railway line from Munich to Garmisch-Partenkirchen runs right through the town. Münter and Kandinsky enjoyed the initially simple life in the "Russenhaus". From just a few meters up the hill they could enjoy the clear view across the deep Murnau Moos over to the mighty rising mountain landscape. A framework of firm lines encompasses radiant, smooth and lavish fields of thin, almost unmixed colors: blue, red, purple, green. With this color tone Gabriele Münter conveyed her view of this wonderful mountain landscape, the deep impression of a striking immediacy. [MvL]
More Information
+
Bidding Options
+
Bid by telephon / written
+
Contact a specialist
+
Buying from A-Z
+
Preview & Auction Procedure
+
Catalogue Order
+
Register for
Gabriele Münter
+
Gabriele Münter Biography
+
Sell
Get a free appraisal for a similar object!
Share 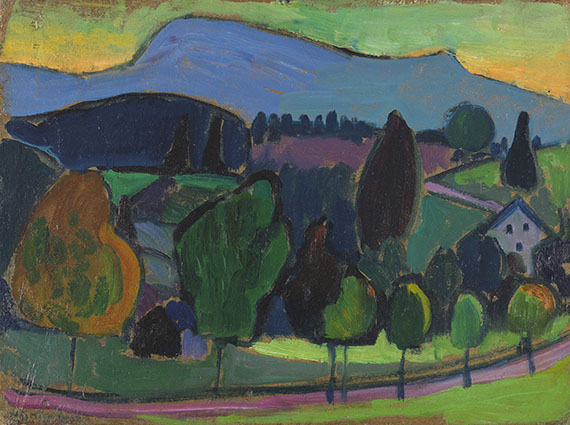 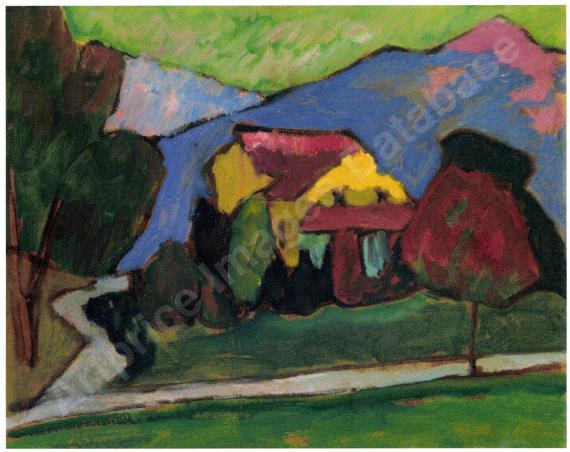 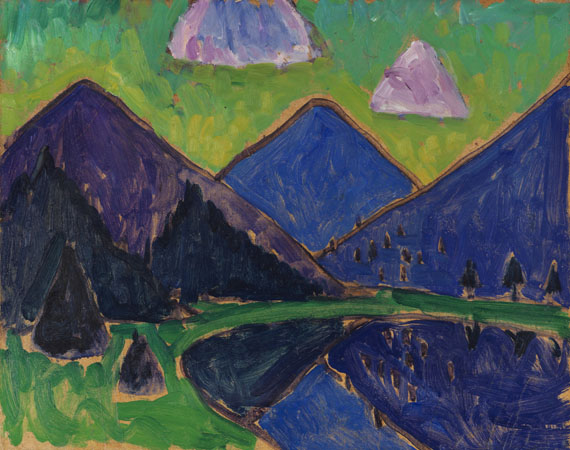 Resale right apportionment:
In accordance with §26 of German Copyright Act, a droit de suite charge of 2.4% including VAT is levied for original artworks and photographs for the compensation of the statutory right of resale.
Gabriele Münter - lots sold by Ketterer Kunst
+
all