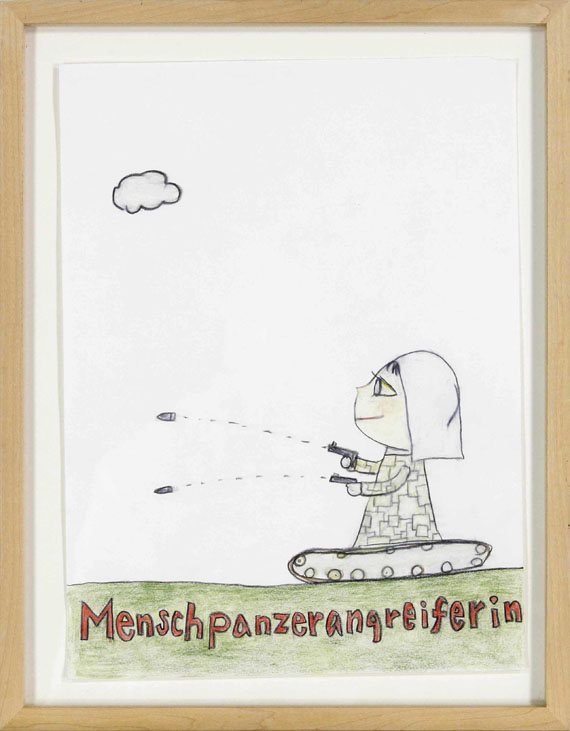 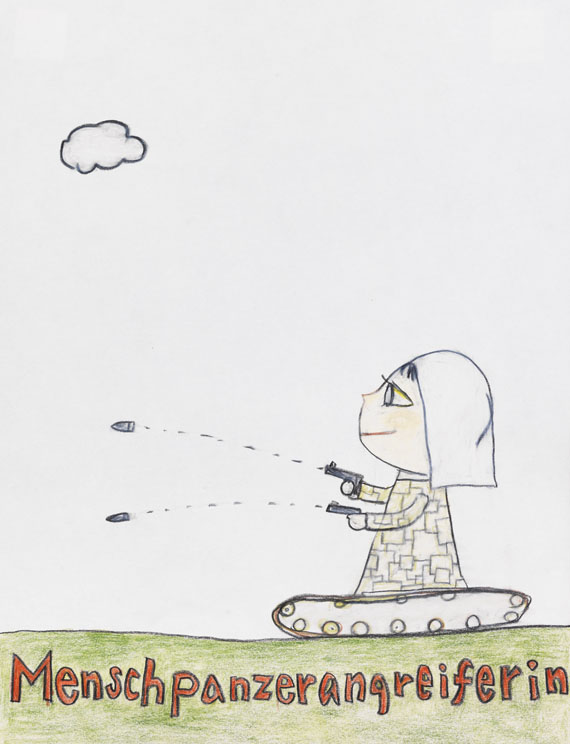 PROVENANCE: Galerie Michael Zink, Waldkirchen (with the gallery label on the reverse).
Private collection Southern Germany (acquired from the above in 2002).

The characteristic drawings offered here were created in Nara‘s homecountry Japan after his long stay in Germany. Having completed studies at the Aichi Prefectural University of Fine Arts and Music in Nagakute, the artist moved to Germany at the end of the 1980s and became a master student of A. R. Penck at the Düsseldorf Art Academy. The years in Germany left a lasting impression on the artist and his art. "I was a foreigner and I had no language skills, so I felt very much isolated. [..] It reminded me of who I am and helped me rediscover myself." The German title of the work offered here "Menschpanzerangreiferin" (literally Human Tank Attacker) a complicated German female noun compound, can be understood as a little wink at Germany.

Nara attained his very own, highly recognizable imagery at the Düsseldorf Art Academy in the 1990s. At first glance it contains comic- or child-like elements and has an aesthetic reminiscent of Japanese Kawaii or Manga. His paintings and drawings are populated by girls with neat bangs, narrow lips, large heads and eyes, as well as with at times evil looks but always in bright candy colors, which Nara puts in a monochrome, strongly reduced and undefined space as individual figures. At a second look, however, Nara's art opens up a dark, emotionally charged and narrative level, with which the representations detach themselves from the supposedly cheerful cuteness. The girls in the drawings offered here are on fire and drop bombs, sit in their tank and fire their guns with a smile. In other works, the chain smoking girls hold knives in their hands, and show a wide range of facial expressions to convey their emotions: loneliness and melancholy, fear and aggression, as well as anger and rebellion. All in all they are characterized by a special sense of black humor that clearly identifies them as the work of Yoshitomo Nara. [CH]
More Information
+
Sell
Get a free appraisal for a similar object!
+
Register for
Yoshitomo Nara
+
Buying from A-Z
+
Contact a specialist
Share