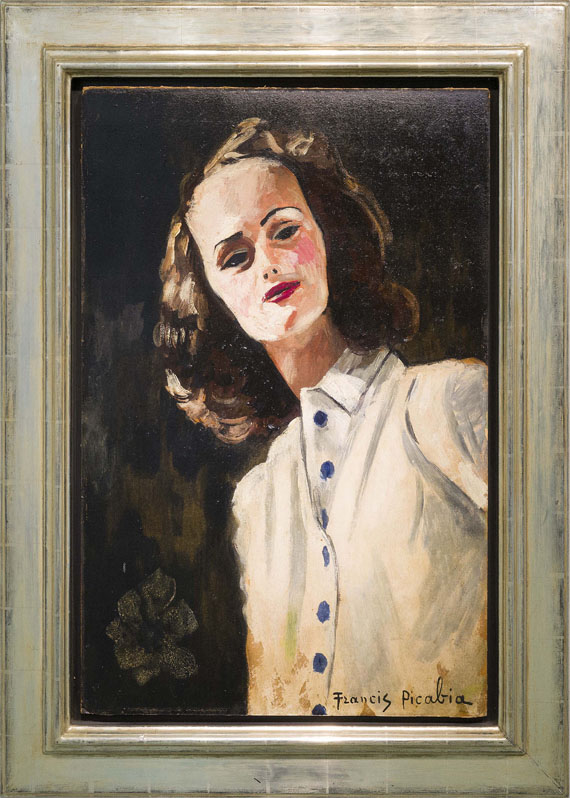 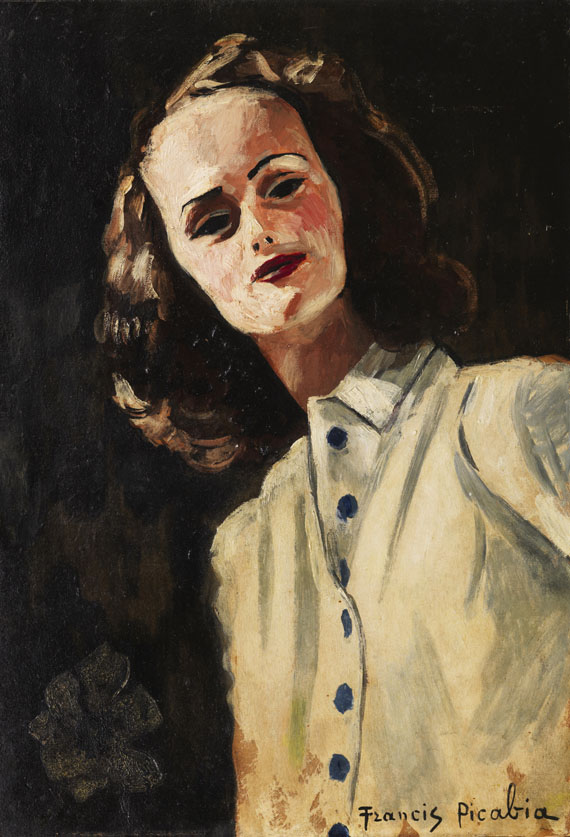 • Rediscovery of a to date unknown portrait of Marlene Dietrich.
• Picabia's art historically relevant photo-based paintings from the 1940s are extremely rare on the international auction market.
• Seminal work for Pop Art's photo-based celebrity portraits.
• Part of a German private collection since the 1970s.
• Tody other works from this period are in possession of, among others, the Museum of Modern Art, New York, and the Centre Pompidou, Paris.

With a certificate from the Comité Picabia dated november 3, 2021. The painting will be included in the Catalogue Raisonné of Francis Picabia and is listed under the registration number 2162.

PROVENANCE: Galerie Klewan, Munich (with the label on the reverse).
Private collection North Rhine-Westphalia (acquired from the above around 1977).

"Our heads are round so that thoughts can change direction."

"Picasso was two years younger than Picabia, but would remain the more old-fashioned artist in many regards. [..] As is known, he disapproved of abstraction as much as he rejected ready-made, mechanic means of creation, especially in connection with photography."

Francis Picabia – On the changeability, progressiveness and allure of his œuvre

There hardly is any other quote that could describe Picabia's eventful œuvre, ranging from Cubism to Dada to the photo-based paintings of the 1940s, more fittingly than his own aphorism from the Dada period: "Our heads are round so that thoughts can change direction." Accordingly, Picabia's thinking changed direction several times, and repeatedly yielded highly progressive results. It is precisely the enormous variability that distinguishes Picabia's œuvre. Picabia's work, which hardly knows any boundaries in terms of style or medium, amazes and provokes at the same time. Its beginnings lie in Cubism: In the years before the First World War, Cubist paintings that testify to Picabia's closeness to the two years younger Picasso were created. However, Picanbia and his eagerness to experiment should soon leave Picasso and his lifelong commitment to representational painting far behind. Picabia was born in France in 1879. He was the son of a Cuban aristocrat and a French lady from the wealthy bourgeoisie. He not only had a reputation as an artist, but also as a lover of fast cars and the ladies. After the end of the First World War, Picabia's avant-gard Dada years followed. Together with Duchamp he advocated a completely new concept of art, liberated from the shackles of traditions. He expressed this demand in collages and material pictures, as well as in script pictures. To today‘s observer, Picabia's associative script pictures from this period, mostly in large format, and with collaged and painted elements, appear like early forerunners of the carefree creations of the American street artist Jean-Michel Basquiat. As of the mid-1920s the artist created landscapes, still lifes and portraits made of collaged matches, toothpicks, drinking straws, pasta as well as paint cans and brushes, with which Picabia expanded the concept of art towards the material picture. In the late 1920s he began wo make works in which figurative and abstract image levels overlap, thus challenging the observers‘ traditional viewing habits anew. For the figurative components, Picabia now occasionally used photographic templates from journals and magazines, which he initially only used as a starting point. He abstracted, combined and superimposed them with other image levels, which in parts led to impressively shrill and striking results that seem to anticipate elements of later Pop Art, such as the art of William Copley.

Around 1940 Picabia attained an even more direct approach to the torrent of images found in everyday life, henceforth his paintings excluded abstract elements and overlays. This way he not only realized a fascinating directness, but also an astonishing modernity. For example, the painting "Portrait d 'un couple" (Museum of Modern Art, New York) from 1942/43, which is presumably based on a print media or television model, is particularly captivating for a painterly freshness and modernity that was very unsual for the 1940s. In our eyes it resembles the early work of the American Alex Katz from the 1960s. The painting "L’Adoration du veau" ("The Adoration of the Calf", Center Pompidou, Paris), which was also created during the Second World War, has a downright disturbing stylistic modernity. It is based on a photograph by Erwin Blumenfeld that was published in ‘Paris Magazin‘ under the title "Surréalisme" in the summer of 1938. As early as in September 1939, Picabia expressed his concern about the war events in Europe: "I spend the time hoping that this will come to an end, that it won‘t take much longer, that it is a nightmare and that I have to wake up to end it." (Quoted from: Francis Picabia, exhibition catalog Kunsthaus Zürich / Museum of Modern Art, New York, 2016, p. 20). During the time of the Second World War, Picabia created many of his works in his studio in the fishing port of Golfe-Juan on the Cote d'Azur, which was strictly monitored by the police because of the balck marketing. Residents lived in constant danger of being arrested by the Gestapo or French militia. The American writer and art collector Gertrude Stein, who knew Picabia personally, was the first to point out that the images that Picabia created in this atmosphere were based on photographs. It was not until the 1990s that research was able to identify the early sources of these often erotic compositions – such as it is the case with the painting "Adam et Ève" (1942), which was auctioned for 2.5 million euros in 2017 – and for which a model in the popular 1930s erotic press was identified.

Our mysteriously withdrawn female portrait was also made during this time. Owing to the sitter‘s aloof androgyny, it emanates a very special aura. The catalog of the Picabia exhibition shown in Düsseldorf, Zurich and Stockholm in 1983/84 only reveals the following about our mysterious portrait, which comes from a German private collection and is now offered on the international auction market for the first time: "A portrait from 1941 (' La Résistance ') shows a mask-like face with an excessively high, arched forehead, proud and lost in reverie. The photo of a film star or a popular singer may have served him as model." (Page XLI). Once seen, the observer can hardly get the image of the mysterious stranger out of his head, as it attracts everyone's attention with its sovereignty and androgynous femininity, while leaving the agonizing question regarding her identity unanswered. It was the German celebrity Marlene Dietrich who relocated to Paris shortly before the war, trying to make her contribution in the fight against the Nazis by singing for the allied troops during the war. "La résistance" is the title of this special painting, for which we were able to identify a photograph shot by Laszlo Willinger from 1942 as the basis. It seems likely that Picabia probably became aware of the photo through an article about Marlene Dietrich published in Vogue. The article about Marlene Dietrich's engagement as a singer for the US troops was published in the July 1942 issue along with an article about "Gertrude Stein in France", which Picabia must have been aware of as he was a friend of the important patron of European Modernism. Willinger's photograph shows the famous German singer and actress, who to this day is celebrated as a kind of "goddess of androgyny" due to her unmistakable, emancipated style, in a white shirt blouse and black "Marlene trousers", staged in the strong spotlight with rich contrast. Picabia opts for a smaller, zoom-like image section that puts focus on the almost unreal facial features thus emphasizing the unique aura that surrounds the depicted lady.
Picabia's completely new and confident handling of the visual material emerging in mass media should be seminal for the photo-based American Pop Art of the 1960s. Picabia's progressive approach, which changed the classic concept of art, is significant from an art-historical point of view. As art traditionally revolved around originality, his paintings based on photographic originals from around 1940 questioned this claim and laid the basis for an expanded concept of art that finally led to Gerhard Richter's early 1960s black and white photo paintings. Richter began looking for suitable motifs in popular mass media in the 1960s and archived them in his famous "Atlas". The examination of painting with the torrent of media images in our everyday life is still one of the central themes of contemporary art. The fact that Picabia declared photography to be a legitimate source of inspiration for painting as early as in 1940 was an extremely courageous step that was ultimately of decisive importance for American Pop Art. And so, for example, the two pop artists Robert Rauschenberg and William Copley showed great admiration for Picabia's photo-based painting. With the awareness of this art-historical development, Picabia's mysterious Marlene portrait "La résistance" must inevitably be seen as an important forerunner of Warhol's famous work "Marilyn" (1967), which was created 25 years later and is also based on a contemporary photo that also made the American actress Marilyn Monroe an artistic icon. [JS]
More Information
+
Sell
Get a free appraisal for a similar object!
+
Register for
Francis Picabia
+
Buying from A-Z
+
Contact a specialist
+
Francis Picabia Biography
Share