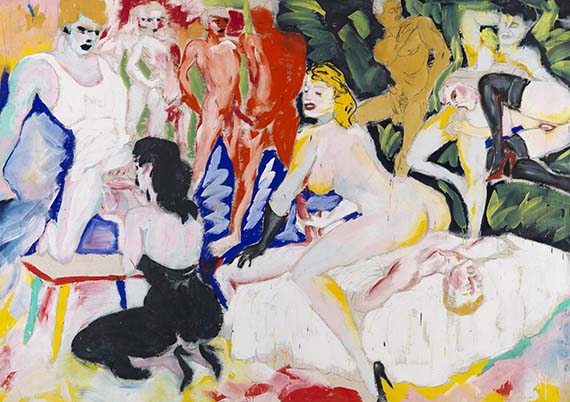 LITERATURE: Salomé, Luciano Castelli und Rainer Fetting. Bild Erotismen, Kunstforum, Zwischenbilanz I: Gemeinschaftsbilder, vol. 67, pp. 70 ff.
Matthias Liebel, Luciano Castelli: 30 Jahre Malerei. Das malerische Œuvre des Künstlers von seinen Anfängen bis Ende der 90er Jahre (dissertation), Bamberg 2004, pp. 20, 160, 165 and 186 ff. (with color illu.).
Rainer Fetting und Jan Hoet, Fetting, Cologne 2009, pp. 172, 176f. (with double-page illu.).
"Castelli's and my joint works also comprised gigantic pictures of Indians and the brothel pictures for which he did the women while I did the men. And than we pushed the envelope even further and painted cock-sucking scenes from porno mags and all that kind of stuff. Huge pictures! That went hand in hand with a lot of beer and pot when painting and was one hell of a fun. Later Jeff Koons had his breakthrough with similar drastic motifs. "
Rainer Fetting, in: Fetting, Cologne 2009, p. 172.

In 1977 Rainer Fetting, Helmut Middendorf, Salomé and Bernd Zimmer founded the collectively operated "Galerie am Moritzplatz" in the subculture art scene of the isolated city of Berlin. The group was joined by the Swiss artist Luciano Castelli a little later. From then on, the Berlin artists made a name for themselves as "Neue" or "Junge Wilde" and also as "Moritzboys": "We wanted to translate feeling, rhythm and spontaneity into color." (Quoted from: ex. cat. Rainer Fetting. Berlin, Berlinische Galerie, BERLIN 2011, p. 65). The joint creation as a liberation from the partially still prevailing traditional art concept, painting together, as well as making films and playing concerts was in line with the attitude and the esprit of the young painters at that time. Joint works seemed like a logical, completely natural consequence. They can be found in Rainer Fetting‘s and Luciano Castelli's oeuvre as early as in the late 1970s. For example, in 1980 Fetting created some monumental wall paintings for the music club "SO36" together with Helmut Middendorf and Bernd Zimmer, while Castelli worked with Salomé on, among others, large-sized diptychs such as "Rote Liebe" or "Seiltänzer" (1979). In the same year Castelli and Salomé also founded the punk band "Geile Tiere" (with Rainer Fetting on drums). In 1982 Luciano Castelli and Rainer Fetting finally teamed up and created the series of large-format "Brothel Pictures", of which the work offered here is a prime example.