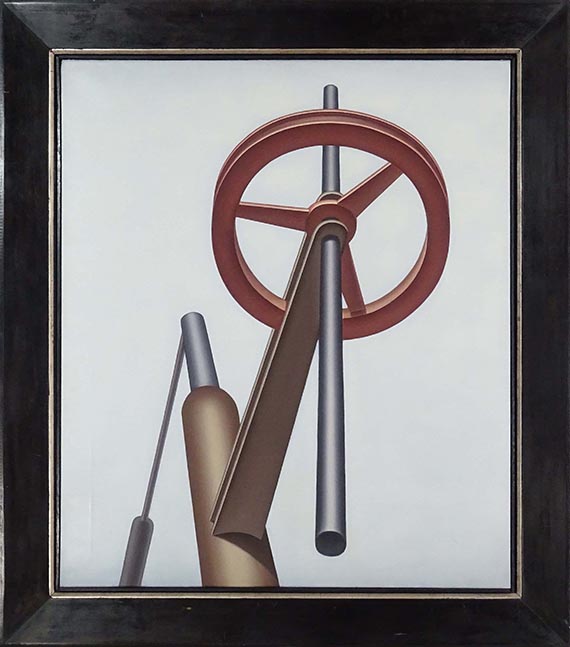 • Klapheck is considered both father and master of the "Machine Picture".
• A particularly clear contrast of light against dark and precise contours monumentalize the mechanic-industrial object.
• Similar paintings from the 1970s are in possession of, among others, the Stiftung Museum Kunstpalast, Düsseldorf, the Städel Museum, Frankfurt am Main, the Wallraf-Richartz-Museums, Cologne, and the Museum Brandhorst, Munich.

The work is registered in the artist's unpublished catalog raisonné with teh number 249. We are grateul to Prof. Dr. Elisa Klapheck for her kind expert advice.

"The pictures want to be painted, they literally force their way out of me. I can see them - not yet in their final version, but the object that wants to find expression is there and along with it the emotions come out. It's the most different forms of emotions, basic emotions like fear, imperiousness, envy, amorousness, sexuality. It's all there, but I can't control it. However, what I can control are the forms, I go to extremes trying to control the forms."
Konrad Klapheck, quoted from: https://sammlung.staedelmuseum.de/de/werk/ein-bisschen-hoffnung.

With his high-contrast, highly precise and yet strangely removed depictions of everyday objects and machines, Konrad Klapheck defied German post-war art, which was dominated by abstraction, Informalism and Tachisme. As early as in 1955, he created his first so-called machine image, depicting a Continental typewriter. This was soon followed by numerous others, until finally such a consistent oeuvre with a concentrated, unmistakable pictorial language emerged that from then on Konrad Klapheck - like Jasper Johns and Robert Rauschenberg in the United States - was celebrated as a pioneer of a new representationalism and gave him a permanent place in of European post-war art.

Especially at the beginning of the 1960s, trivial motifs found their way into American, British and German art. With Pop art, a new generation of artists elevated the beautiful appearance of consumer goods to a pictorial theme worthy of representation. A new realism that challenged the general dominance of abstraction was born. In Klapheck's art, too, the world of everyday objects conquered the picture‘s surface: typewriters and sewing machines, shoe trees, bicycle clamps, water taps and showers, as well as pipes and loudspeakers filled the canvas, which Klapheck - as is the case in the present work – enhanced with partly emotionally charged captions. A second scrutiny by the viewer usually reveals that the machines, which are presented in a completely objective and neutral manner at first glance, are actually non-functional, completely irrationally constructed objects. While the letters on the keys are left out in the famous typewriter pictures, for example, the mechanical construction shown here lacks the indispensable wire ropes that should run over the deflection pulley, so that the machine in our machine picture cannot fulfill its actual purpose either. Despite the apparent uselessness, Klapheck gives the objects a strong physical presence, shows them as independent personalities that dominate the picture and, in connection with the meaningful, associative headings, creates a certain humanization of his machines.

Photographs play an extremely important role in the artist's brainstorming and creative process. A large number of his works are based on photographs and the work offered here also refers to several photographs taken by Klapheck of a so-called wire saw, a saw running over guide wheels, which the artist saw in the Carrara quarries during a stay in Italy. On a light background, Klapheck shows only a small section of the complex mechanical construct, whereby he succeeds in breaking out of the banal motif with the help of alienation effects, an extreme perspective and strong close-up, a strong light-dark contrast, painterly brilliance and the precise reproduction of the partly shiny materials to create a spaceless and timeless composition of strangely haunting, tactile-sensuous aesthetics. [CH]
More Information
+
Sell
Get a free appraisal for a similar object!
+
Register for
Konrad Klapheck
+
Buying from A-Z
+
Contact a specialist
+
Konrad Klapheck Biography
Share