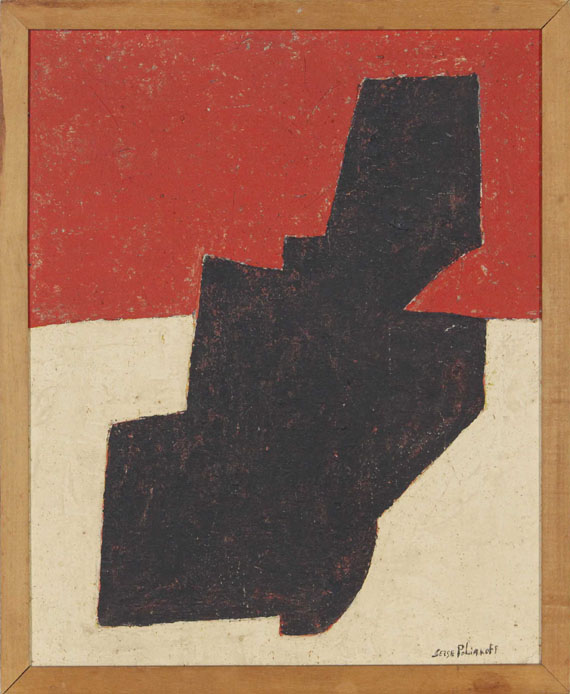 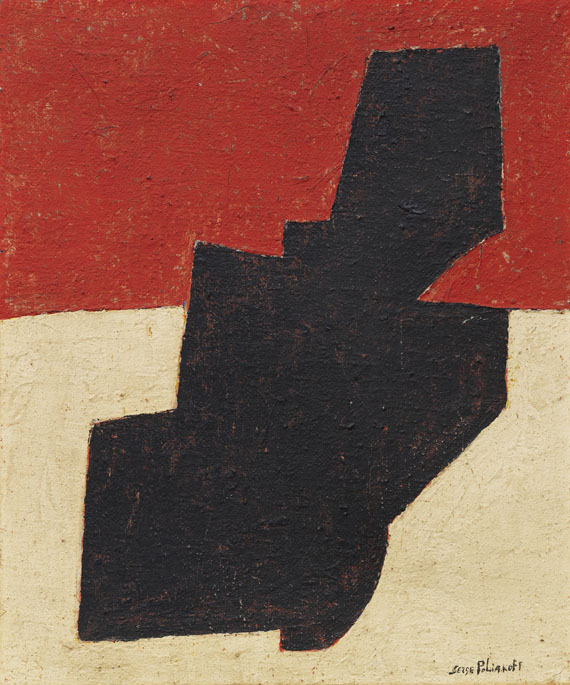 • Rare early color field of seminal relevance in Poliakoff's creation.
• The whereabouts of the painting have been unknown since 1957.
• Rediscovered in a Southern German private collection and now offered on the international auction market.
• A painting from 1954 in similar colors and composition is in the 'Bayerische Staatsgemäldesammlungen', Munich (Poliakoff 54-07).
• Paintings from the 1950s are in important international private collections, as well as in the Museum of Modern Art, New York, and in the Tate Modern, London.

The painting is registered at the Poliakoff Archive, Paris, with the number "951027".

PROVENANCE: Galerie Ex-Libris, Eraste Touraou, Brussels (directly from the artist).
Private collection Southern Germany (acquired from the above in 1957, ever since family-owned).

"Some may say there is nothing to see in abstract painting. If it was for me, I could live three lifes and still would not have told everything I see."
Serge Poliakoff, quote from: Künstler. Kritisches Lexikon der Gegenwartskunst, edition 31, issue 21, III 1995, p. 2.

After figurative beginnings, Serge Poliakoff, who is one of the most important protagonists of European Color Field Painting, began to paint abstractions in the 1940s and finally found his characteristic style of clearly contoured, gently interlocking color fields around 1950. Our minimalist composition, developed from just three colors, is one of the artist's rare early color fields. The compositions from the early 1950s, which are often still reduced and, in a decisive way, formative for Poliakoff's oeuvre, are considered his most sought-after works. In comparison with the works by the American Color Field painters Clifford Still and Ellsworth Kelly from the same time, Poliakoff‘s works show the enormous artistic progressiveness of the post-war years. The black form – which for its massiveness resembles an abstract sculpture - pushes itself in front of the background formed from the energetic symbiosis of a rust-red and an egg-shell-colored section. In contrast to red and white, the black is at the the center of the composition, to which Poliakoff adds a special kind of tension by letting the forms seemingly extend to the edges of the picture. In the years that followed space, proportions and rhythm remained the most important elements of Serge Poliakoff's painting. Contours of the interlocking color fields are always slightly curved and thus carry a barely noticeable tension that is decisive for the unique dynamic appeal of the composition. The special harmony of his painterly work unfolds through the colors‘ nuances, the forms that increase their density towards the center and the tension between the color fields. In his unique compositions Poliakoff, with his immeasurable creative power, lets us rediscover the individual effect and interaction of the colors and thus the almost unlimited emotional expressiveness of abstract painting over and over again. [JS]
More Information
+
Sell
Get a free appraisal for a similar object!
+
Register for
Serge Poliakoff
+
Buying from A-Z
+
Contact a specialist
+
Serge Poliakoff Biography
Share