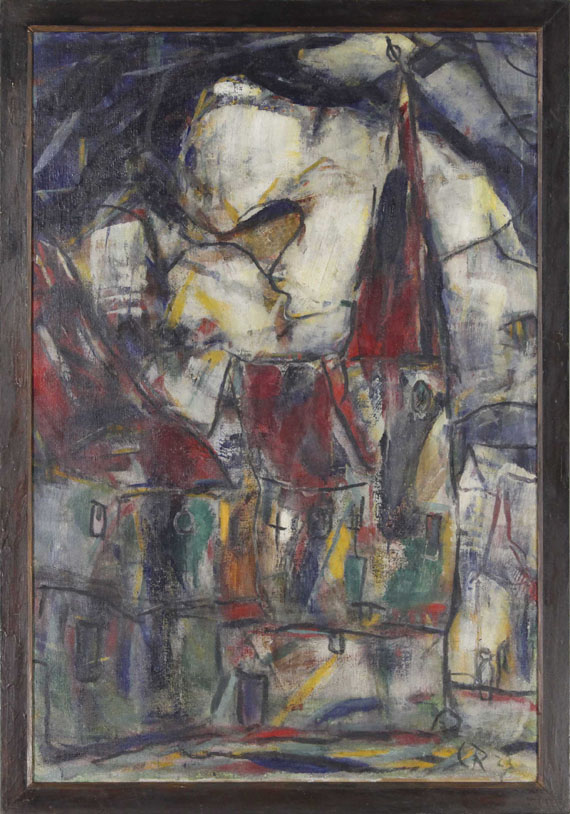 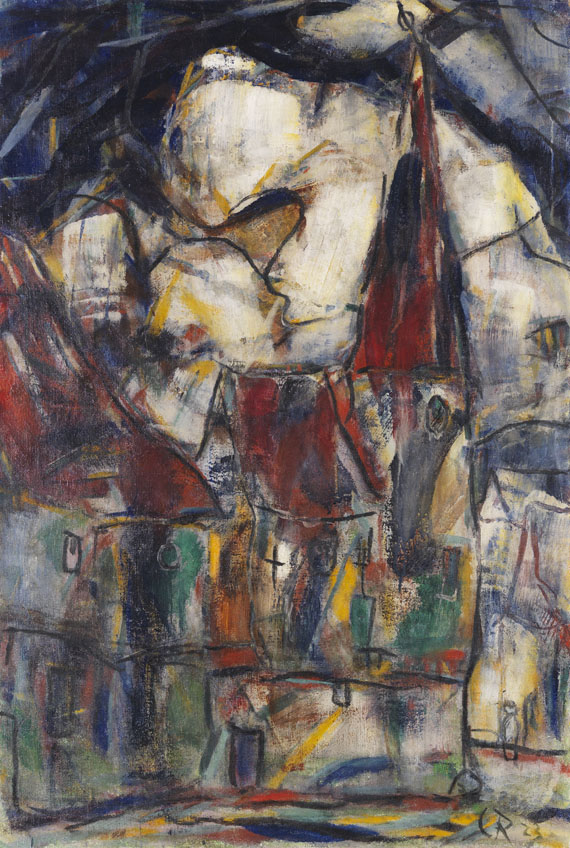 • Architecture pictures from around 1920 are among his finest works and realize top prices on the auction market.
• Specific traits of his art became manifest in his works from the last two decades of his life.
• Acquired from the artist and owned by the same family for ca. 95 years.
• Exhibitied at Stedelijk Museum Amsterdam in 1964.

PROVENANCE: Dr. Walter Reinecke, Hagen (acquired from the artist)
Ever since family-owned through inheritance.

Rohlfs was celebrated by his contemporaries as one of the leading representatives of German plei-air painting and developed a style parallel to the Barbizon school and French Impressionism. No other German artist has undergone a development that covers such a wide range tendencies. Through Henry van de Velde's agency Rohlfs met the founder of the Folkwang Museum, Karl Ernst Osthaus in Hagen / Westphalia. In 1901 he had a studio set up for the artist at the museum in Hagen. The relocation to Hagen resulted in an unexpected change. The influences of Van Gogh and Neo-Impressionism became increasingly noticeable in his works. The enormous development that Rohlfs' painting made within just a short period of time since he had left Weimar can be clearly seen here. Entirely in the sense of Expressionism, the artist no longer tried to reproduce what he sees, but what he feels. Color and shape no longer describe, but have intrinsic value. The headstrong painter managed to maintain his independence despite an abundance of inspirations. His examination of current trends in was less on a theoretical level, but primarily through artistic practice, during the work process, in direct contact with material and technology, with themes and motifs. He experimented with a wide variety of techniques. He not only worked with several materials at once, he also used them simultaneously in one work in the sense of a mixed media work. His most beautiful paintings in oil are the architectural pictures of Soest, Jena, Erfurt or the Andechs monastery from around 1920. Along with Feininger's Gelmeroda paintings, these are the greatest architectural accomplishments in German painting of the 20th century. Like the city of Soest, the center of the town of Dinkelsbühl and its medieval aura inspired Rohlfs to do several works. The streets and buildings that show the signs of the times, the medieval towers and pointed roofs of the small houses in narrow streets fascinated the artist. One doesn't need to expect topographically exact accounts of architectural conditions. Maybe it is possible to identify the tower of the medieval Dinkelsbühl city wall. Sensation comes to the fore: maybe it was a stormy day, a looming thunderstorm. Ribbons of black clouds pervade the sky, harbingers of the upcoming gusts and downpour. The energetic brushstroke lets the old walls vibrate. The scene is kept in dark, elegant colors and is both close to nature and remote at the same time. "Aus Dinkelsbühl" is an outstanding example of how reality and an image determined by color can form a perfect composition. [SM]
More Information
+
Sell
Get a free appraisal for a similar object!
+
Register for
Christian Rohlfs
+
Buying from A-Z
+
Contact a specialist
+
Christian Rohlfs Biography
Share