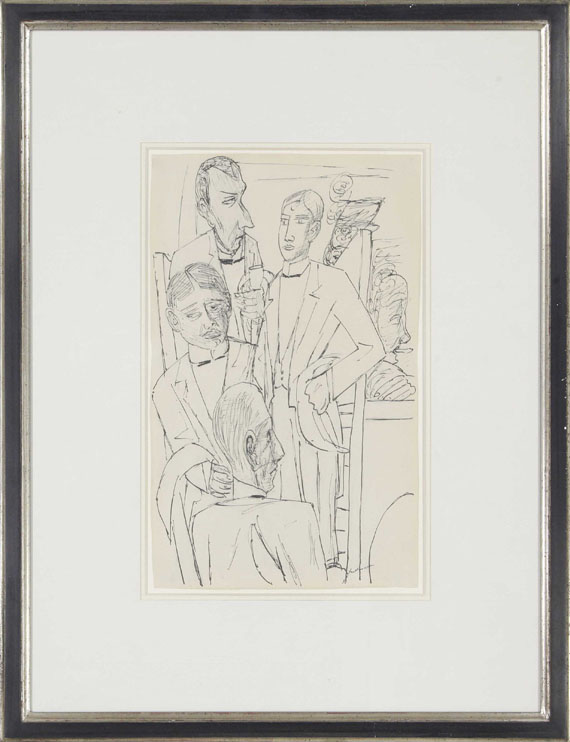 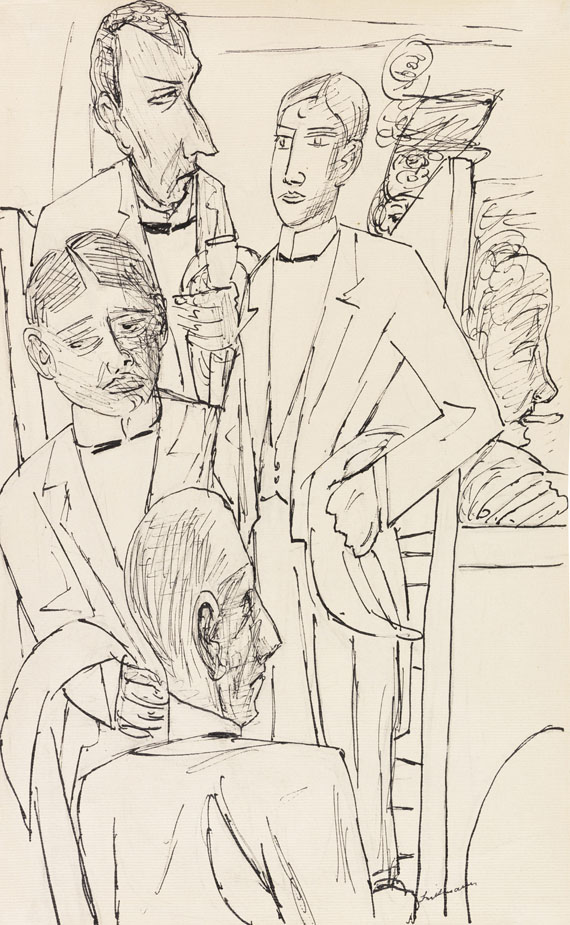 The work will be included into the forthcoming catalog raisonné of drawings compiled by Stephan von Wiese and Hedda Finke. We are grateful for the kind expert advice.

One day after the opening of the "Degenerate Art" exhibition in Munich on July 19, 1937, Max Beckmann chose exile and moved along with his wife Mathilde (Quappi) from Berlin to Amsterdam . On May 10, 1940, German troops invaded Holland, Belgium and Luxembourg without a declaration of war. Life in Holland became noticeably worse, "in the winter of 1944/45 the living conditions in Holland became very difficult. There were no more trams, one hardly saw bicycles because most of them had been confiscated by German forces. There were no cars in the streets except for those of the Germans. Else streets were empty and quiet. There was almost no food, hardly any heating material, no electricity, not even candles", described Mathilde Beckmann the depressing situation (quote from: Mein Leben mit Beckmann, Munich 1985, p. 35). Until then Beckmann had cared little about the prohibitions, he continued to paint with electric light without darkening his studio. And since the 1920s at the latest, he had enjoyed going to cafes and bars, often on his own, in order to watch the people, in Berlin, in Frankfurt and in Amsterdam. Beckmann prefered bars and cafés that belonged to fashionable grand hotels, such as the "Krasnapolsky Hotel" with a winter garden, which was not far from Beckmann's studio, or he went to are smaller pubs, often with music or cabaret performances. His favorite pubs in Amsterdam were mostly in the immediate vicinity of his home or in the area around Leidseplein. His local pub "Kaperschip" was right across from his house on Rokin. Since it was located in the basement, Beckmann visited the bar even during air raid alarms and, after work, and also treated himself to a glass of champagne or other drinks in his studio. He also attended music and cabaret performances, for example at the bar "Charlotte Chérie" bar, one of the places he was a regular at.
It can‘t be said with absolute certainty at which bar Beckmann conceived this scene, nor whether he perhaps created this encounter with the three waiters from memory at a later point. In March 1943 some of Beckmann's preferred restaurants were closed. The waiters, however, look very elegant in their tailcoats, waistcoats and bow ties. Around this time this was a common outfit of waiters even at less elegant pubs and cafés, as it distinguished them. A guest enters the premises and is received by a waiter, while the other two are engaged in a conversation. Beckmann stands out as a smoking chronicler in the right part of the scene, but he is not really involved in the depicted event. The episode was apparently important to the artist, as the word “groß“ (big) in the title suggests. In addition to the “Großen Kellner“, other works have similar titles, among them "Großes Cafe", "Große Bar" or "Großes Cabaret". [MvL]
More Information
+
Sell
Get a free appraisal for a similar object!
+
Register for
Max Beckmann
+
Buying from A-Z
+
Contact a specialist
+
Max Beckmann Biography
Share