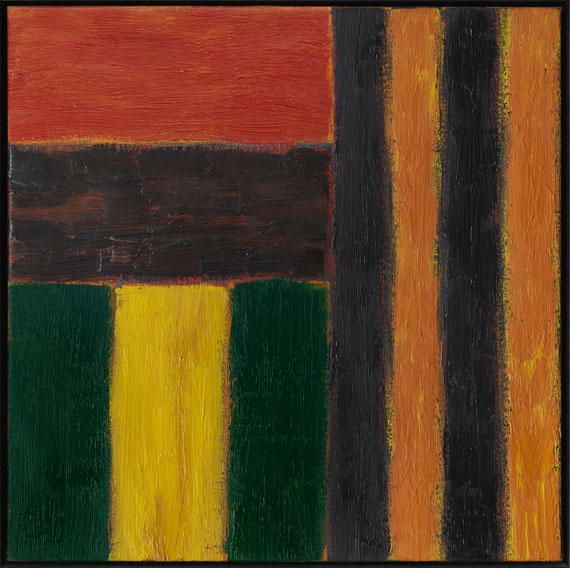 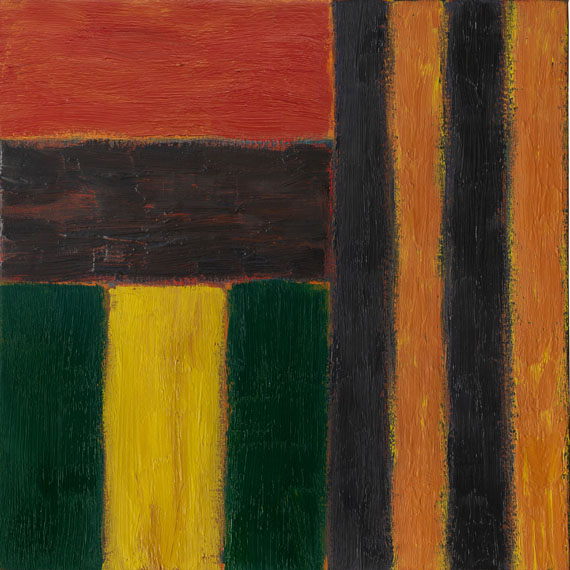 • In the early 1980s Scully found his very own, unmistakable imagery.
• Other paintings from the same year are in possession of, among others, the Metropolitan Museum, New York, and Tate Gallery in London.
• Part of a southern German private collection for almost 20 years.
• With its harmonious, particularly balanced structure and colors, the work is seminal in Scully's oeuvre.
• The surface's matt-glossy materiality, the painterly brushwork, the warm colors and the color field's liveliness make for a painting with a sensual, almost sculptural effect.

International success
With his abstract, at first glance strictly geometrical and yet very sensual, works with stripes in different widths and geometrical color fields, Sean Scully is one of the most important artists of his generation. His oeuvre comprises paintings, pastels, watercolors and drawings, as well as prints, photographs and sculptures, many his works are part of the most prestigious international collections, including the Museum of Modern Art, the Metropolitan Museum of Art and the Solomon R. Guggenheim Museum in New York, the National Gallery of Art, Washington, DC, the London Tate Gallery, the Albertina in Vienna and the Guangdong Museum of Art, Guangzhou.
In the course of an artistic career of almost 50 years, Scully can look back on numerous important exhibitions and awards. In the year the work offered here was created, one of his works was shown in the sensational exhibition "An International Survey of Recent Painting and Sculpture" at the Museum of Modern Art, New York. Shortly after first solo exhibitions in European museums followed, among them shows at the London Whitechapel Art Gallery and the Städtische Galerie im Lenbachhaus in Munich (1989). It is this recent success in particular that testifies to Scully's rank in European art history at the end of the 20th and the beginning of the 21st century and to the influence his work has on the development of contemporary abstraction. In 2013 he became a member of the Royal Academy of Arts, and in 2014/15 Scully was the first Western artist ever to be honored with a comprehensive, retrospective exhibition in China, shown in both Shanghai and Beijing. In 2019 alone there were eight solo exhibitions of his works worldwide, among them shows at the National Gallery of Art, London, and the Albertina in Vienna.

Stripes and Stripes
Since his artistic beginnings Scully's work consist of compositions of stripes in different colors, stripes that run vertically and horizontally, stripes in different width and lengths, as well as of rectangular color fields that Scully uses to fill the surface, which, in turn, is divided into rectangles. The artist describes the strong visual impressions he had on a trip to Morocco in 1969 as a key moment. "Then I saw the striped fabrics that the Moroccans dye and make them into galabeyas - their robes. I saw those stripes everywhere in Morocco and when I got back to work I was making grids from stripes of color. " (Sean Scully, quote from: www.seanscullystudio.com) The garments that are widely used in the Maghreb states, the traditionally striped djellabas or galabiyas and the intense and rich local colors, sparked a strong fascination in Scully that continues to show in his art to this day and which the artist translated into his very own, unmistakable visual language. Although his painting has always been subject to constant development and change, his fundamental conception of art has not changed in over 40 years of creation. In an almost obsessive preoccupation with geometric structures and arrangements of rectangular shapes, the artist still gathers inspiring visual impressions from his surroundings that he then processes in his works: the orthogonal streets of Manhattan, the arrangement of man-made cladding on house facades and metal plates on sidewalks or the thousands of years old walls of horizontally and vertically stacked stones on the Aran Islands in Scully's homeland, which the artist immortalized in his photographic work "Aran" from 2005.

The perfection of imperfection
While the earlier works were still made with a certain minimalist approach, a regularity and evenness with strictly separated stripes and color fields, Scully attained a more emotional form of abstract painting after he had gone on an influential trip to Mexico. Light, the colors‘ materiality and the surface texture began to play a bigger role. Scully's geometry and design language became softer, the spaces between the color bars and stripes less precise. This development also shows the various art-historical influences that play a role in Scully's art: From the accurate straightness of Piet Mondrian to the vibrant color fields of an Abstract Expressionism of Mark Rothko and others, Scully seized, especially after his emigration to the USA in the late 1970s, many suggestions which would find expression in his very own imagery on the canvas.
Scully always begins a work with a structure, a precise division of the surface that is to be painted, because the essential principle of his works is the order and arrangement of the color fields. The artist chooses from an almost infinite wealth of compositional options, he initially divides the rectangular shape of the image surface into several smaller rectangular elements or stripes. He then fills the individual fields with several layers of paint using a broad brush. The rigidity of the fields‘ initially strictly orthogonal or parallel structures is destroyed by the subsequent concentrated color application in layers, because narrow fragments of the superimposed layers of color remain visible in the spaces between the rectangular surfaces. This imperfect, blurred delimitation creates an odd kind of vibrancy. Aforementioned multitude of strong, rich layers of paint in interaction with the unique surface materiality and the particularly painterly, almost impasto brushstroke that shows clear traces of the artist‘s craft, adds an opulent, almost intimate sensuality and at the same time an almost sculptural physical presence to our painting.

Association in abstraction
The work offered here, with its warm colors, emanates an even greater degree of sensual liveliness, with its smoky-sooty gray-black, the flaming red-orange tones and a flickering yellow color field, it evokes associations with a blazing fire, as the title also suggests. A fire only contained by the lush, cool dark green of a damp forest floor. Although Scully has dedicated himself to a completely abstract painting without figurative echoes, his works offer an abundance of possible association due to their color tones and their horizontal or vertical stripes, as well as by their astonishingly descriptive titles. "Africa" (1990), "Light in August" (1991), "Reef" (1995), "Land Sea Sky" (2000), "Wall Bloom" (2016) and also the work "Fire" (1984 ) are reminiscent of the elements, of horizon lines, vast fields, coastal landscapes or even buildings and thus hint at the slight notion of the artist‘s reality they are based on. They explain Scully's creative process in which external influences - inspirations from nature, everyday life and personal experiences - are expressed in a certain form and in different color modulations. This way and through the great wealth of associations in the works, the painter once again increases their emotional quality.

A masterpiece of sensual abstract painting
The harmonious, particularly balanced structure and format of the work offered here anticipates later works from around 2000 in which Scully finally abandoned the delicate stripe compositions of the 1980s and 1990s in favor of dividing the picture‘s surface into almost consistently shaped rectangles. With the sensual opulence of the strong and warm colors used here, the vibrating tension and liveliness of the spaces between the color fields and the iridescent, partly glossy surface texture, "Fire" is not only an outstanding work from the artist‘s important early creative period, but also unites the most essential characteristics of Scully's entire oeuvre in its kernel. [CH]
More Information
+
Sell
Get a free appraisal for a similar object!
+
Register for
Sean Scully
+
Buying from A-Z
+
Contact a specialist
+
Sean Scully Biography
Share