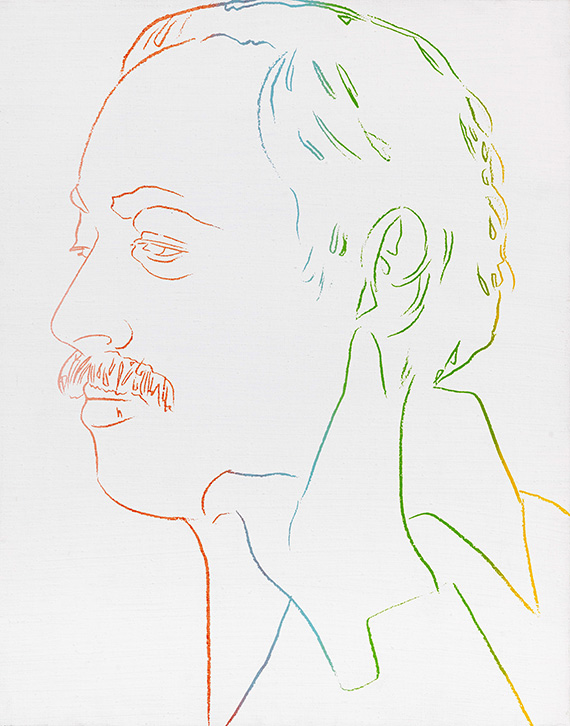 • Unique object.
• Portrait in Warhol's brilliant, strictly linear style and in strong colors.
• Warhol's famous portraits of Marilyn Monroe and other celebrities are icons of art history.
• Homage to the American writer Tennessee Williams, with whom Warhol shared, despite the success, a feeling of exclusion because of their homosexuality.
• In 2020/21 Tate Modern, London, and the Museum Ludwig, Cologne, dedicated the exhibition "Andy Warhol Now" to Warhol's artistic contribution to greater social diversity.

With a certificte issued by the Andy Warhol Foundation for the Visual Arts, from July 14, 2005 (in copy).

"If you want to know all about Andy Warhol, just look at the surface: of my paintings and films and me, and there I am. There`s nothing behind it."
Andy Warhol

Essay
Andy Warhol is internationally recognized as an outstanding protagonist of American post-war art. Warhol's art is colorful, flashy and loud: Warhol is Pop Art. Warhol's appearance was just as striking as his art. With black sunglasses and a white-blonde wig, Warhol has become part of our collective memory. Since the 1960s, this appearance has been both a trademark and a mask the loner Warhol was wearing. With the help of art, Warhol succeeded in overcoming his youthful trauma of being different and excluded. Warhol is a brilliant draftsman, the quick comprehension, the sure line and the strictly linear drawing style, which almost completely dispenses with internal contours, bear witness to his beginnings as a commercial artist. In addition to the pencil, Warhol's camera had also been a constant companion since 1970. He shot photos of stars, the New York audiences and of artist colleagues he was friends with. His portraits of Marilyn, Liz Taylor and others have become icons. Photography was his visual diary, a collection of artistic templates and a means of artistic expression. At the end of a strict selection process, some of his photographs served as formal basis for his graphic editions and his paintings, for which he also employed the screen printing technique. In 1960 Warhol got to know the famous American writer Tennessee Williams, whose plays - such as "A Streetcar Named Desire" and "The Cat on the Hot Tin Roof" - were filmed with star casts in the 1950s. Williams was a homosexual, he suffered from depression over years after the early death of his partner Frank Merlo and he eventually became a victim of anti-homosexual violence in 1979. It was probably this discrepancy between fame and the simultaneous feeling of ostracism that Warhol knew from his own life and that particularly attracted him about Tennessee Williams. In 1983 Williams surprisingly died in his New York City residence at the Hotel Elysee, He was said to have choked to death on the cap of his nasal spray or his eye drops. Thus the fact that Warhol dedicated this portrait on canvas, as well as the drawings, to the famous writer as a kind of homage to an unadjusted life is little surprising. Most recently, Tate Modern, London, and Museum Ludwig, Cologne, dedicated the exhibition "Andy Warhol Now" (March 12, 2020 - June 13, 2021) to Warhol's artistic work as a formative contribution to greater social diversity. [JS]
More Information
+
Sell
Would you like to sell a similar object?
+
Register for
Andy Warhol
+
Bidding Options
+
Written bid
+
Buying from A-Z
+
Contact a specialist
+
Andy Warhol Biography
Share 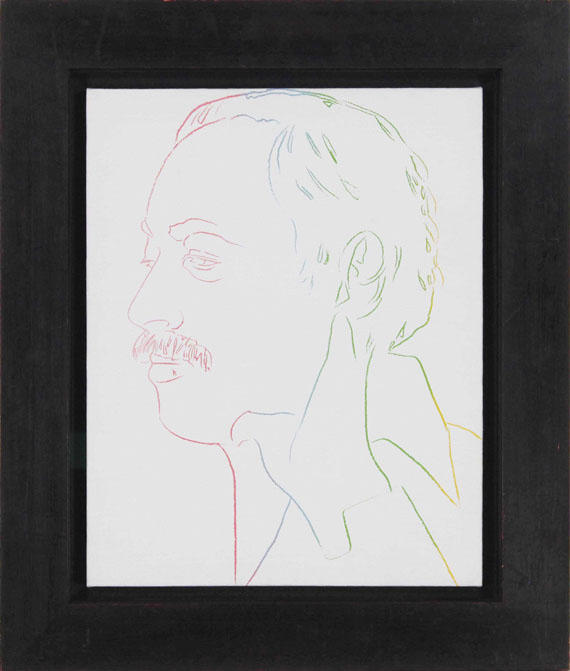